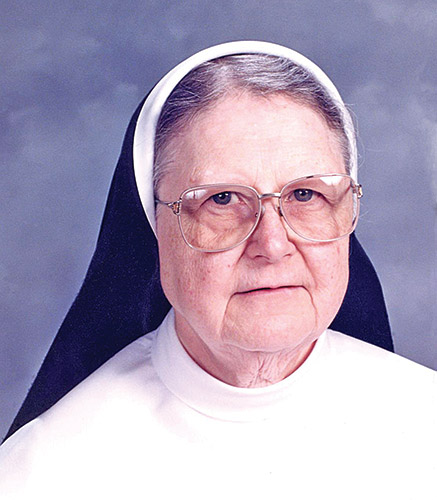 Springfield Dominican Sister M. Ruthanne Huss, OP, died peacefully on May 3, at St. John’s Hospital. She was born in Aurora in 1933, to Francis J. and Ruth (Raboine) Huss and baptized Frances Jane. She joined the Dominicans in 1954 and professed her vows in 1956 at Sacred Heart Convent in Springfield.

Sister Ruthanne taught children of just about every grade level at schools throughout Illinois including Chicago, Springfield, Jacksonville, Odell, Mendota, Jerseyville, Carlinville, and Newton. For 10 years, she taught at the public school in Sainte Marie and was principal, from 1965 to 1968. She served as librarian at Marian Catholic High School, Chicago Heights, from 1991 to 2002, then took on the same role at Sacred Heart Convent in 2003. Though she officially “retired” from the library in 2020, Sister Ruthanne continued to help her successor sort and catalogue new books whenever she could.

Sister Ruthanne was preceded in death by her parents; her stepmother, Rosanna G. Long Huss; and her sister, Joyce Harner. Surviving are three nephews; three nieces; many great-nieces and great-nephews; and dear friends.

A private Mass of Resurrection was celebrated at Sacred Heart Convent on May 6. A private burial was held at Calvary Cemetery on May 7.

Memorials to honor the memory of Sister Ruthanne may be made to the Dominican Sisters Retirement Fund, 1237 W. Monroe St., Springfield, IL 62704.

The Dominican Sisters and friends of Sister Ruthanne were served by Butler Funeral Home-Springfield.