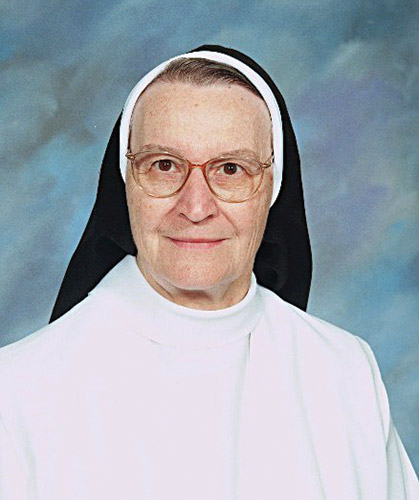 Sister Mary shared her love of music with school children throughout central Illinois, spending just one year — her first year of teaching — in Chicago. After that, she was barely more than 200 miles from her beloved hometown. She taught in Rantoul, then spent 1961 to 1976 in Litchfield as a teacher of both primary and junior high students and for five years, as principal. She also taught in Mendota, Springfield, and Pana, where she was principal of Sacred Heart School. This was her final teaching assignment before transitioning to community service at the motherhouse where for 16 years she ably served as secretary to the maintenance department, transportation coordinator for the needs of more than 100 sisters, and as a receptionist.

Sister Mary was preceded in death by her parents; her brothers, John, Robert, Edward, and Ralph (Betty) Albrecht; her sister, Loretta (Melvin) Mattis; and her sister-in-law, Helen (Robert) Albrecht. She is survived by her brother, William (Ruth) Albrecht; sisters-in-law, Theresa (John) Albrecht and Jean Young; and a loving network of cousins, nephews, nieces, and dear friends.

A private Mass of Resurrection was celebrated at Sacred Heart Convent on May 10. A private burial was held at Calvary Cemetery on May 11.

Memorials to honor the memory of Sister Mary may be made to the Dominican Sisters Retirement Fund, 1237 W. Monroe St., Springfield, IL 62704.

The Dominican Sisters and friends of Sister Mary were served by Butler Funeral Home-Springfield.