At his ordination at the Cathedral of the Immaculate Conception on June 12, Father Christopher Trummer looked back at his more than seven years in seminary, particularly last year. That’s when COVID-19 resulted in the change of the original date of his ordination to the transitional diaconate — and that meant he was the only deacon ordained during a Mass when six men, including his brother, were ordained priests. Now, he has had his turn to be ordained to the priesthood for the Diocese of Springfield in Illinois. 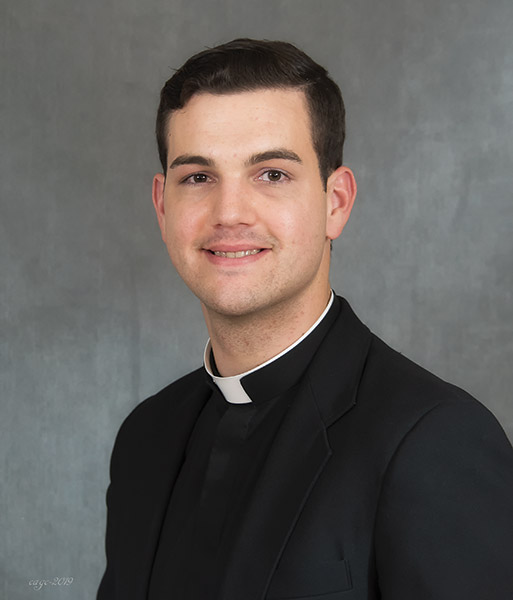 “I think it will be quite different to be ordained by myself,” the deacon who was about to be ordained a priest said a few weeks before his ordination date. He said he would have preferred to have been ordained with other men — not only because that would mean more priests for the diocese, but also because he tends to feel a bit uncomfortable being the center of attention. “I try to remember that, while I am obviously the one being ordained, and people are rightly excited about that, it is also not about me personally. The Catholic Church joyfully celebrates every priest — this one happens to be me!”

He has been studying in Rome and returned to the United States on May 24, allowing him time to spend with his family and to prepare for his ordination. “As I reflect on and anticipate the gift of my fast-approaching ordination, I am excited and grateful beyond words,” he said. “After seven-and-a-half years of seminary, it definitely feels somewhat surreal to be getting ordained at last.

“Seminary has been a long but amazing journey. As a seminarian, it was easy for me to become so immersed in seminary life and formation that the priesthood seemed like a rather distant reality. Occasionally — especially during the summers — ministry experiences and elements of formation would bring ordination to the priesthood back to the front of my mind,” he said. “But now, with ordination so close, it is practically all I think about! This past year — which has certainly been unusual and difficult for most people — has felt like the fastest year of my life.”

Father Trummer is the son of John and Margaret “Bitsy” Trummer. He has an older brother Johnathon “Jonny” Trummer and two younger siblings, twins Katrina Schoenfeld and Father Michael Trummer. Last year Katrina and her husband Joey Schoenfeld had their own set of twins, making him an uncle to babies Claire and Tucker.

“Besides the gift of life itself, I want to thank both my parents for handing on the precious gift of the Catholic faith to me,” he said. “Even though I did not always understand or appreciate the gift, they remained steadfast in their witness to Christ and the Church. Their unconditional love for me enabled me to believe in God’s unconditional love for me. Above all by their example, they taught me the invaluable lesson that a life spent in service to others is a life of joy and meaning.”

Father Trummer chose Father Peter Harman to vest him at the ordination. “As the rector of the Pontifical North American College in Rome, Father Harman has had a profound impact on me during my time in formation here,” he said. “The way he lives his priesthood inspires me, whether that be his leadership as rector, his excellent preaching, or his joyous, generous and humorous personality in everyday conversations and interactions. He has been a great mentor for me, offering advice and encouragement throughout my formation journey in Rome. Since I already had my brother vest me as a deacon last year, I thought I would extend the honor to another priest who has had an impact on me.”

As a newly ordained priest, he is set to celebrate his Mass of thanksgiving on June 13 at St. Michael the Archangel in Sigel, which is one of the sister parishes to his home parish in Neoga. He will remain in the States this summer and return to Rome this fall to continue with his studies.