Biking over 600 miles for one cause, mothers and their unborn children

For Nathalie Corbett of Springfield, her connection to the pro-life movement is deep and personal. When she was 18 years old, she was told the story behind her biological mother’s pregnancy for the first time. She learned that her mother fell into all of the stereotypes that encourage women to get an abortion. Her mother was young, beginning her career, and it was a one-night stand that resulted in an unplanned pregnancy with twins. To add to the list, while she was pregnant, she was diagnosed with cervical cancer. The doctors encouraged her to abort the twins. Instead, she chose life.

Corbett thanks God every day for her life, and now she is about to join dozens of fellow life minded people, embarking on a 600+ mile bike ride called Biking for Babies. Their mission is to raise money for pregnancy centers around the country and in our diocese.

“In doing Biking for Babies, I can participate in the pro-life movement in a way that I haven’t before,” Corbett said. “I have always wanted to be more involved with pregnancy centers, but I never got around to it. I want to be able to help and encourage centers that help women who find themselves in similar situations as my biological mother. I also want to be able to play a part, whatever it may be, in allowing women to find the same courage that saved my own life. That courage can be found at the local pregnancy centers.”

From July 11-17, dozens of missionaries like Corbett will make sure their bike tires are pumped, the chain is lubricated, and their helmet is strapped tight for an average of 100 miles of riding a day. Four groups will cycle a combined 2,700 miles for the babies, women, and families served by these pregnancy resource centers. Groups will leave from Green Bay, Wis.; Columbus, Ohio; Natchez, Miss.; and Holly, Colo., and converge in St. Louis.

Corbett is riding to support First Step Women’s Center in Springfield, while two other riders are representing pregnancy centers in our diocese, Choices Pregnancy & Health in Charleston, and ThriVe Metro East in Godfrey.

“Biking for Babies is a pro-life nonprofit aiming to renew the Culture of Life, one pedal stroke and one pregnancy resource center at a time,” said Nikki Biese, executive director of Biking for Babies. “Inspired by Jesus’ call to protect the most vulnerable, we advocate and fundraise for pregnancy resource centers, who provide life-affirming resources to women in unplanned or difficult pregnancies. We form young adult missionaries (ages 18-39) in pro-life apologetics, spirituality, and cycling.”

On Friday, July 16, the two groups, about 30 riders total, will be stopping in Springfield. The public is invited to join the bikers and support crew for the 5:15 p.m. Mass at the Cathedral of the Immaculate Conception and to a dinner afterward in the Cathedral atrium to listen to testimonials from the missionaries. 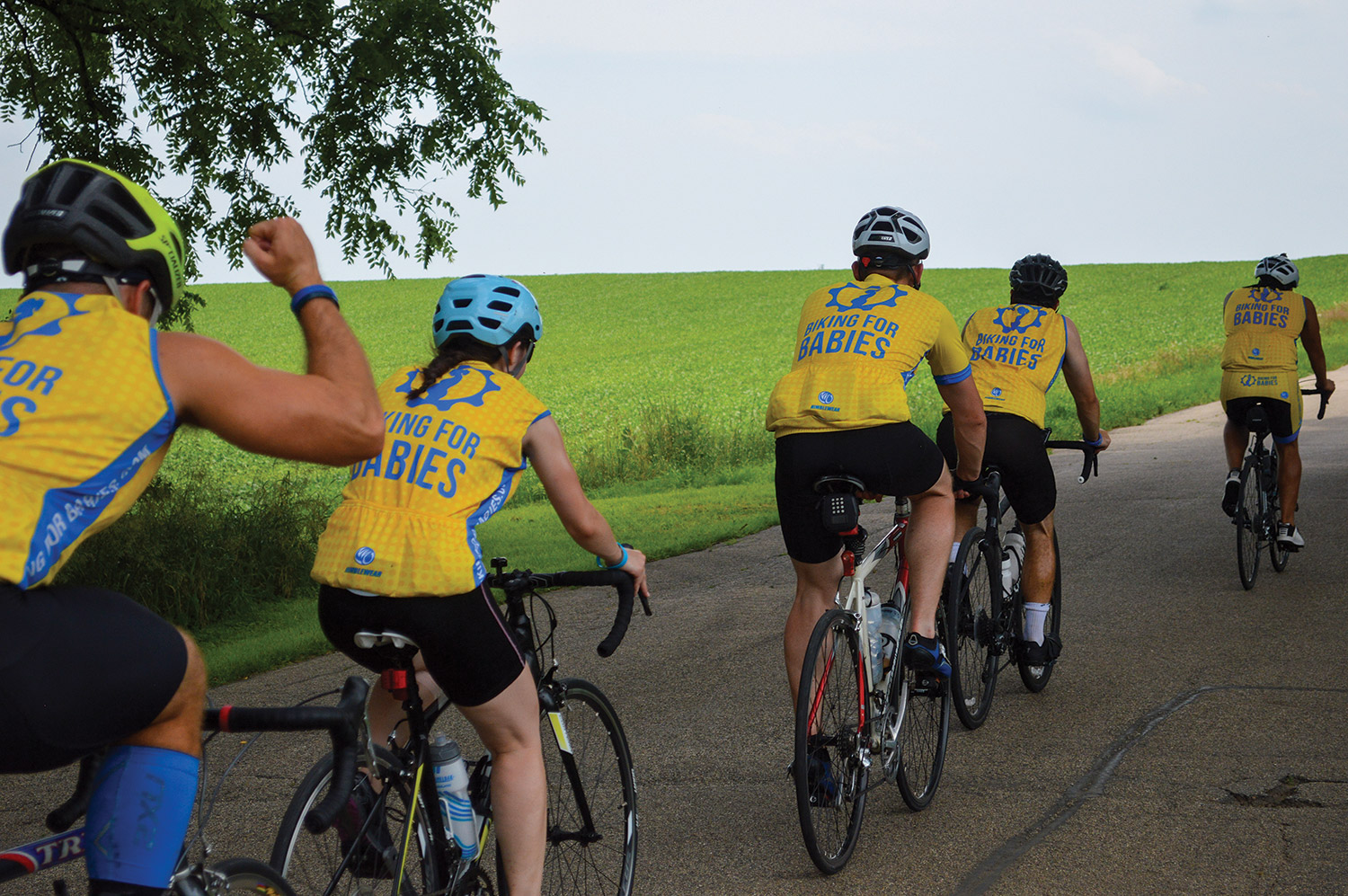 “Each rider or support crew missionary raises money, based on a goal they have set, on average they raise $3,500 each,” Biese said. “The money goes to the overall pregnancy resource center fund and funds are divided equally amongst all our partnered centers.”

“I am looking forward to my partnership with First Step Women’s Center,” Corbett said. “On my first visit, I was offered a tour of the facilities, met some of the staff, and heard stories about how women’s lives are changed in this building. As Biking for Babies missionaries, we want to bring awareness to these centers by sharing their stories and their missions to the community with the hopes of getting more support.”

In terms of preparing for 100 miles a day of riding, Corbett says she, like the other missionaries, have been training for months.

“I am trying my best to prepare myself physically, mentally, and spiritually,” Corbett said. “Physically, I am working out a minimum of two hours a day and have reserved one day of the week to bike longer, 40 miles or more. The mental preparation comes with the physical. I have been running into some blocks in my training and getting through them is important. Spiritually, we have weekly Scripture studies, but we also offer all the suffering and struggles in our training to the cause — the mothers, the babies, and those in crisis. Additionally, we are always praying for the mission of renewing a culture of life and for all of our pregnancy centers. The great thing about Biking for Babies is that it’s a bit of an extended pilgrimage. The training and work that is going into it is just as important as the biking, sacrifices, and prayers we will be offering toward our mission this summer.”

You can choose to support a missionary’s fundraising goal or give to the Biking for Babies fund;

Attend the missionaries’ witness talk on Friday, July 16 after the 5:15 p.m. Mass at the Cathedral of the Immaculate Conception, Springfield;

Pray for mothers, unborn children, and a culture of life!