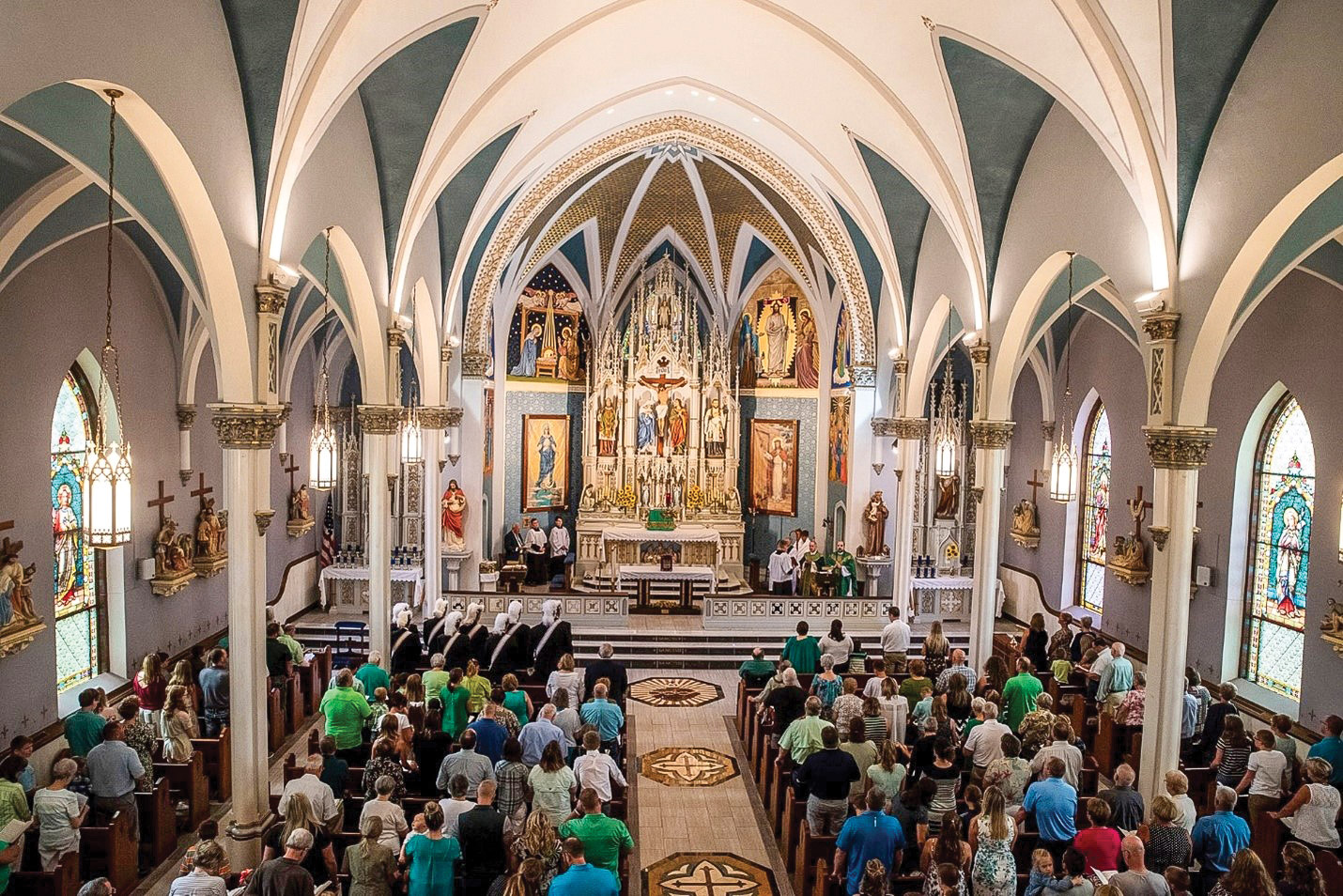 JERSEYVILLE — When you are a few miles outside of Jerseyville, you can see the spire of St. Francis Xavier Church. In what has been described as standing “majestically as the focal point for the people entering Jerseyville,” this 140-foot spire, has been a reminder for everyone entering the city that the people in this community are deeply Catholic, something that dates back several generations. On July 4, the parish celebrated 150 years, their sesquicentennial jubilee.

“I am a convert of 20 years to the fullness of the Catholic faith,” said Alex Foster, a parishioner. “Two phrases I remember hearing while in RCIA were: ‘To go back in time is to become Catholic’ and ‘Come home.’ These sayings came to life for me when the church was being renovated to its former beauty and by personally benefiting from the hospitality of its parishioners.”

The first Catholic Mass in Jerseyville was held in the William Shepherd home in the fall of 1841. Fathers Carroll and Hamilton of the Alton Diocese, which included Jersey County, occasionally visited Jerseyville and held Masses in private homes and the courthouse.

In 1849, it was decided there was a need for a Catholic church. It was not until 1857 that a small frame church was erected which was dedicated by Bishop Henry Damian Junker, bishop of Alton. Father Thomas Mangan became the first resident priest of St. Francis Xavier Church where he remained until 1860. Later in the 1860s, a rectory was built which later became the home for the Dominican Sisters who staffed the school for over 100 years. Ground was also purchased for a parish cemetery.

In 1868, a cornerstone was then laid for a larger church, the current St. Francis Xavier Church. The main body of the church was to be 55 by 100 feet. The inside height of the ceiling in the center of the nave is 43 feet and side aisles are 25 feet. William Embly and Sons were the architects of the Gothic style church. The body was made of brick made in Jerseyville and the stone trimmings came from the Grafton quarries. The roof was covered with slate shingles. The cost to build the church was $25,000 and took three years to complete. On July 4, 1871 the church was dedicated by Bishop Peter J. Baltes, bishop of Alton.

To celebrate 150 years, the parish, since December, has been having monthly anniversary moments before Sunday Mass where members share their memories. The Altar Society published a memorial cookbook with history and pictures. A customized banner is being displayed made by parishioner Joan Dougherty and her daughters. The celebratory 150th anniversary Mass was held on July 4, which included a keepsake program with pictures and history and holy cards. The Vatican also sent an Apostolic Blessing from Pope Francis.

“I am grateful to be a member of a devout Catholic parish, and the best part of this anniversary for me has been hearing the personal memories of lifelong parishioners and learning the history of this faithful parish,” Foster said.