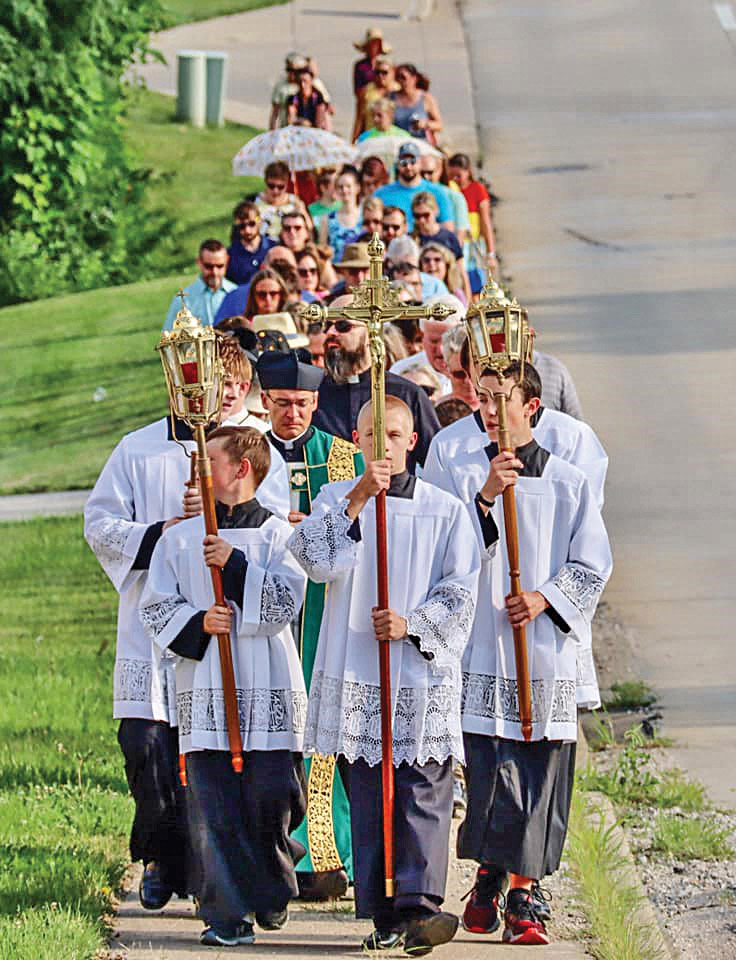 About 135 Catholics and others devoted to the Venerable Servant of God Father Augustine Tolton, a Quincy native, commemorated the 124th anniversary of his death with a pilgrimage procession in Quincy on July 9. Father Tolton is recognized as the first black priest in the United States and his Cause for the beatification and canonization of sainthood is ongoing in Rome.

The mile-long pilgrimage procession began at the statue of Father Tolton outside St. Peter Catholic School and ended at St. Peter’s Catholic Cemetery where Father Tolton is buried.

Upon entering the cemetery, the procession stopped at the grave of Father Tolton for the celebration of Evening Prayer, which is composed of Psalms, a reading from Scripture, a homily, and petitions. Father Daren Zehnle, pastor of St. Augustine Parish in Ashland and a native of Quincy, preached. 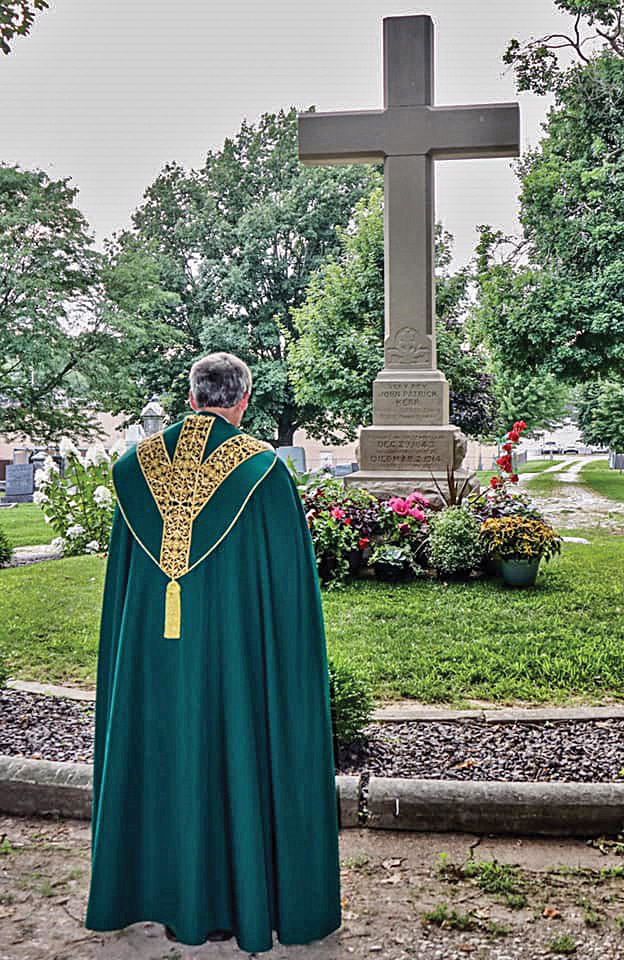 After Evening Prayer, the pilgrims prayed for an end to racism and for more priests through Father Tolton’s intercession, as well as for Father Tolton’s canonization as a saint. The pilgrimage procession concluded with the singing of Holy God, We Praise Thy Name, Father Tolton’s favorite hymn. 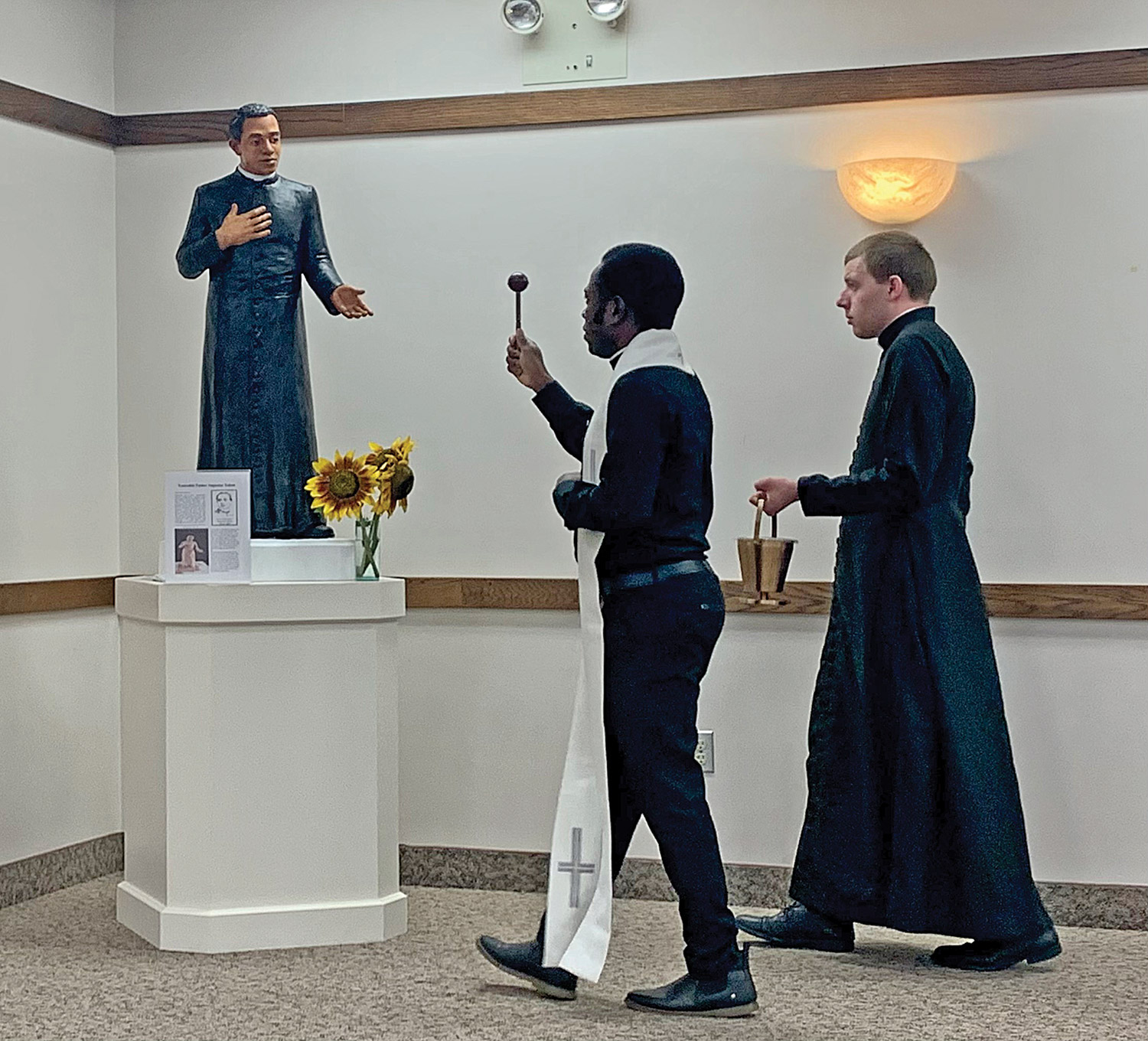 The new image, sculpted by Teresa Clark of Terre Haute, Ind., will remain in the parish center, until Father Tolton is beatified. Then, the statue will be moved to the altar to join the St. Mother Theodore Guerin statue, also sculpted by Clark, in the sanctuary on the “Quincy” side of the reredos.

An original script, prepared especially for this event, Tolton, My Life, was read by its author Patrick Coulton of Charleston and Deacon Paul Lesupati of the parish.

Immaculate Conception in Mattoon has a personal connection to Father Tolton as in 1892, he came there to preach.

“There wouldn’t have been many African Americans in Mattoon at the time,” Father John Titus, the pastor, said. “But Father Tolton was well received and many, many people came to see him.”

Father Tolton was born into slavery in 1854. In 1862, his mother and siblings made a daring escape across the Mississippi River to Illinois. After settling in Quincy, he went to school at St. Peter’s Catholic School. Father Tolton later went to seminary school in Rome because no American seminary would accept a black man. Thinking he would minister in Africa, once he was ordained, he was instead sent back to Quincy, where he arrived to thousands of supporters. Known for his incredible singing and homilies, Father Tolton spent several years in Quincy before transferring to Chicago. He died of heatstroke at the age of 43 on July 9, 1897, and is buried at St. Peter’s Cemetery in Quincy. Most recently, Pope Francis declared him “Venerable” on June 12, 2019, the second step of four to becoming a saint in the Catholic Church.