For several priests and many parishioners growing a garden is just one way to enjoy God’s gifts over the spring, summer, and beyond. Whether the gardens are small or large, sometimes digging in the dirt, planting, weeding, and harvesting are great ways to relax, spend some time in prayer, or even burn off frustration.

Father Michael Meinhart, parochial vicar of St. Boniface Parish in Edwardsville, says he is happy to get back to following in his family’s footsteps. “Growing up we always had a large garden. … It just seeps into your being when you grow up doing it,” he said. “When visiting my parents during the summers, I would often still help in the garden.

“I tried my hand at container gardening a few summers while assigned at parishes during seminary, with varying degrees of success. Last year I tried putting out a small garden in the backyard before I moved in July 1, but it is hard to maintain a garden when you don’t live somewhere yet. This year was my first opportunity to put in a better and more extensive garden.” 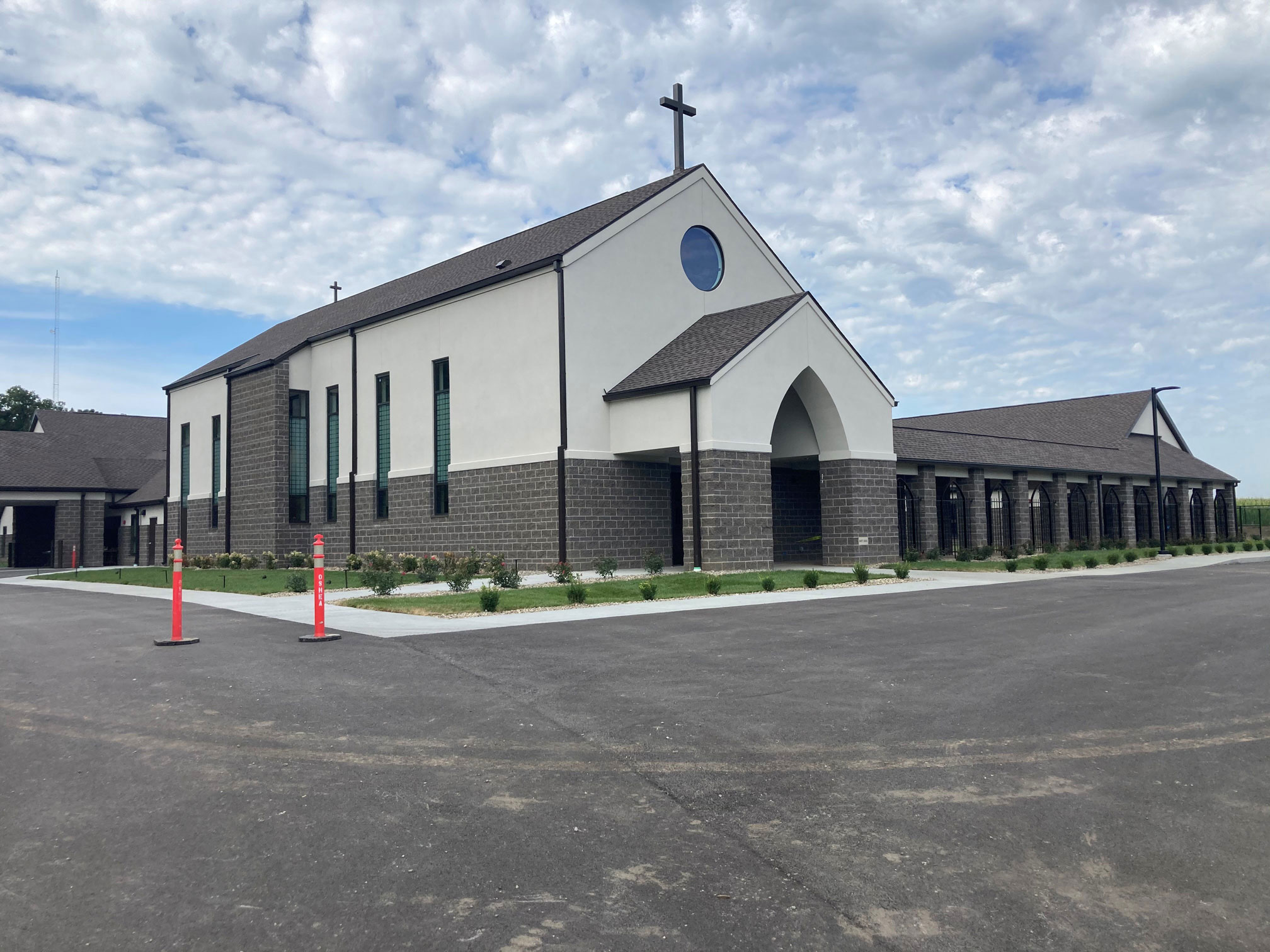 Gardening takes time and is worth the effort, but the priests say sometimes their parish schedules mean the plants must take a back seat. “It depends on the week for how much time I put into it,” said Father Meinhart. “I do it as a hobby, so if something doesn’t get done when it should — oh well!  Usually, I work on it on Mondays, my day off.”

Father Allen Kemme, pastor of Little Flower Parish in Springfield, says he began gardening when he first became a pastor, about 20 years ago. “I gained interest in gardening from my dad.  He had a large garden in our backyard, and he taught me most of what I know about gardening,” he said. “I enjoy working in the garden, being outside and experiencing the fruits of my labor.”

In his garden Father Kemme grows lettuce and radishes in the spring; green beans, peppers, tomatoes, cucumbers, and potatoes in the summer; and sweet potatoes and honeydew in the fall. He says harvest time is his favorite part of gardening, while he doesn’t really enjoy pulling weeds “and keeping the critters out of my veggies!”

Father Kemme says pulling weeds does give him quiet time for reflection. “Most of my prayerful time comes when I am planting the seeds.  Usually early in the season the weather is pleasant, and planting is kind of an act of creation in itself,” he said and then added, “Sometimes when I am fed up with parish administration, etc., it is really good just dig in the dirt!” 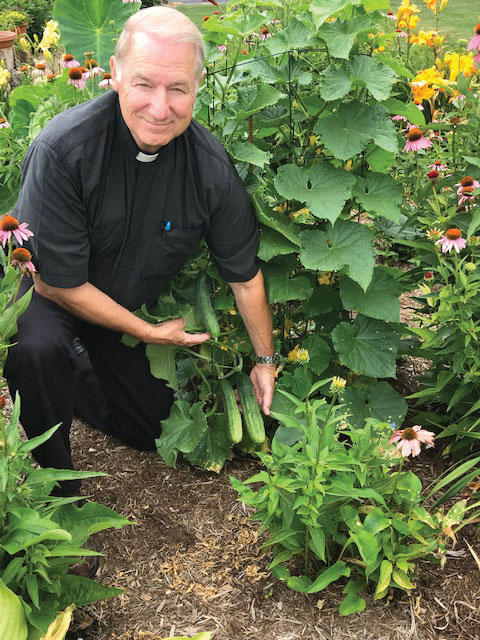 Father Mark Schulte, pastor of St. Mary in Pittsfield and St. Mark in Winchester, says gardening is “in his blood” as his maternal grandparents were gardeners by profession. Their company was called Frericks Gardens and Greenhouses in Quincy. As a boy, he helped with the family business and then rediscovered gardening again after college. He has small garden plots around the parish grounds, which are mingled among the flower beds.

“I also operate a large garden with our Knights of Columbus Council on some ground that a parishioner generously lets us use,” Father Schulte said. “We grow most of the common vegetables: tomatoes, potatoes, beans, peas, cucumbers, onions, sweet corn, sweet potatoes, cabbage, melons, pumpkins, and peppers.  I started growing oak tree seedlings from acorns this year. I also grow a fairly large selection of perennial flowers and herbs.”

Father Schulte says he doesn’t have a favorite part of gardening. “It’s all part of a whole. One thing is connected and dependent upon another,” he said. “It is organic just like our Catholic faith (CCC 18). But it is very gratifying watching God’s handiwork in the various plants. There really isn’t anything I don’t like about gardening, even the sweat and toil. I understand how it all goes together, like a piece of art or a fine piece of furniture. The work is simply part of the finished product.”

Father Schulte says he is a big fan of “abundance.” “I can’t eat everything I grow,” he said. “Most of the produce goes to the Knights of Columbus vegetable stand where the proceeds go to charitable causes. The vegetable stand is on the parish parking lot and people come from all over town and even from some distance to support it.” 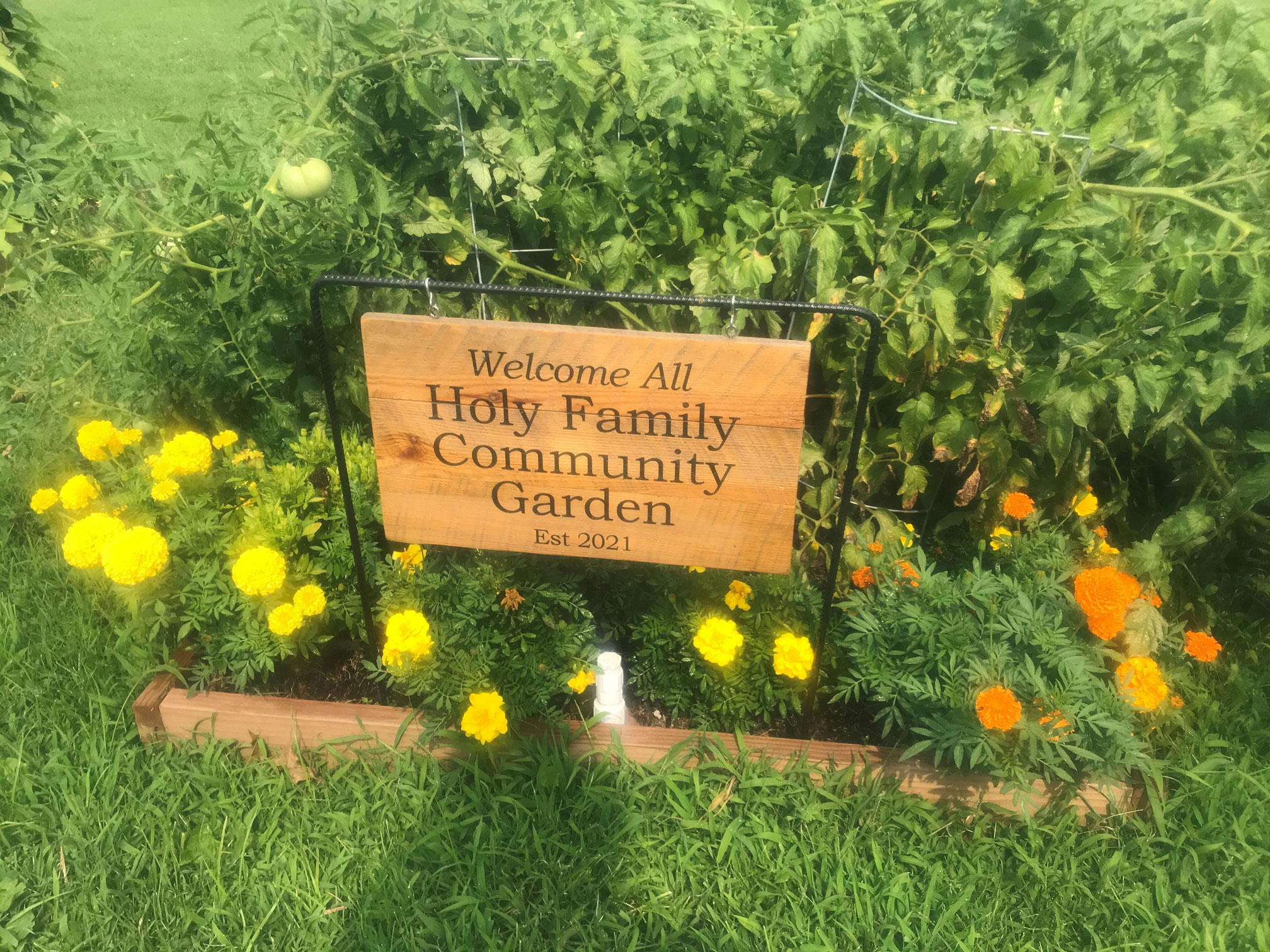 At Holy Family Parish in Granite City, parishioners began a community garden this year. “Through our community outreach program, we felt this would be a good way we could offer assistance to both our community and our parish family,” said Mary Wilkinson, who spearheaded the program. “We offer it as an extension of our food pantry.”

The Holy Family garden sits next to the parish. “We are lucky, our parish has a parcel of land next to our parish grounds that we are able to use,” Wilkinson said. “Since this is our first year, we started with about eight people working on the project. We had workers preparing the land and building wooden garden boxes. Then we had the expertise of gardeners and workers to help maintain the garden.

“The garden is available to our neighborhood and parish community,” she said. She said a parishioner, Ricky Smith, built a veggie stand that holds the produce. “Our first goal is to benefit those in need. But we also encourage our parishioners to get veggies because we do not want to see any go to waste.”

Father Schulte says so much good comes out of gardening. In fact, he believes gardening is form of prayer in itself, “because work is a form of prayer and a fulfillment of God’s will.” “After the fall of Adam and Eve work was no longer an optional thing, but an essential part of fulfilling God’s will.”

Gardening, and agriculture in general can play an integral part of his homily preparation, he says. “The Gospels are full of agricultural metaphors. … A man will do well to have some familiarity with the soil. Like the plants he cultivates, he will become part of it someday. Even the cemetery is a garden that should be maintained well.”

As far as priests and gardening, Father Schulte sees a connection. “Gardening can be good training for the priesthood,” he said. “If a man is not willing to sweat and get his hands dirty, he is not likely to be a good candidate for the priesthood.”