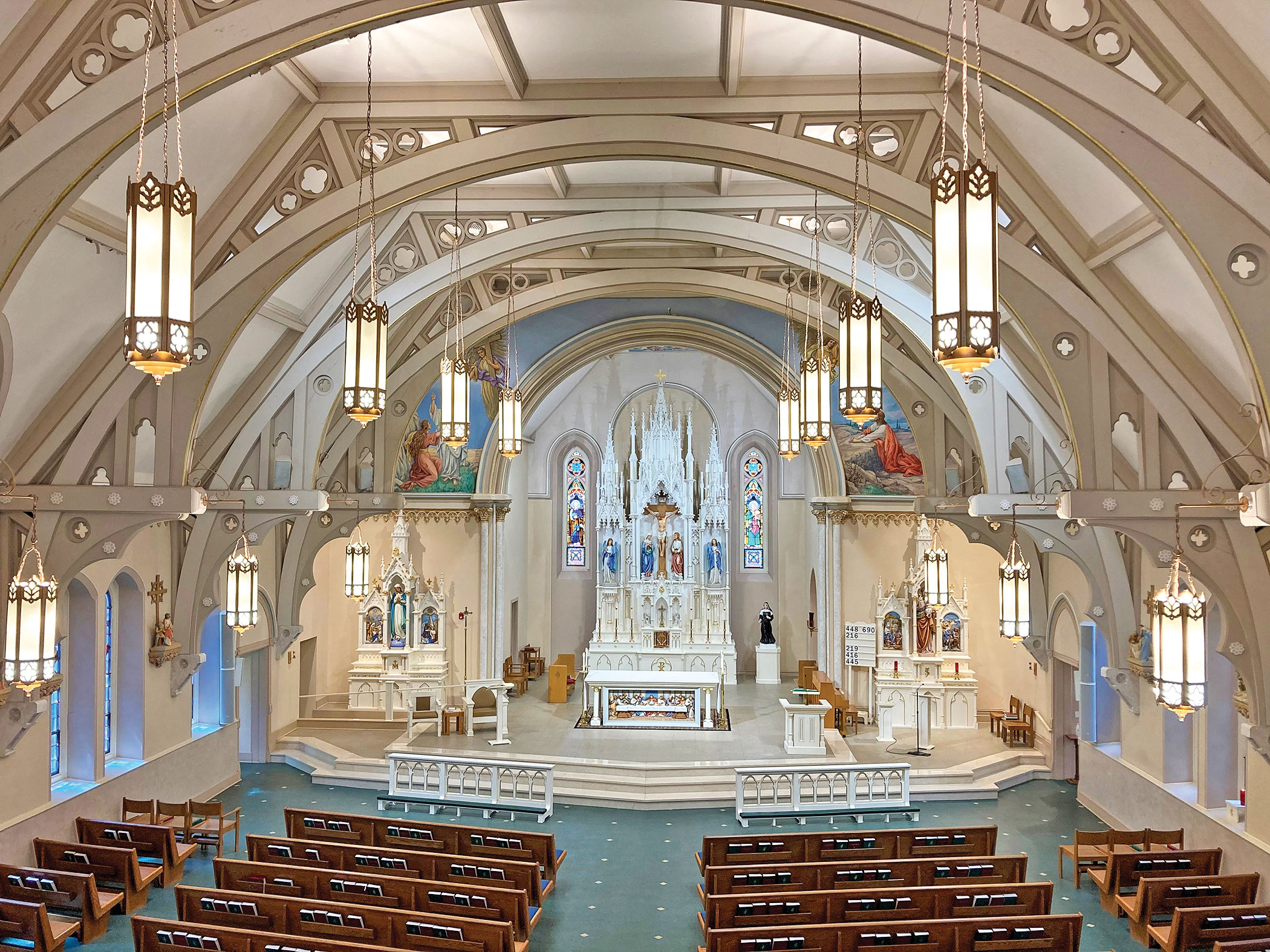 Immaculate Conception Church is an iconic structure in Coles County that dates to 1884 when the cornerstone was laid. At a cost of $50,000, the church in Mattoon was dedicated by Bishop John Spalding of the Diocese of Peoria in 1887, 33 years after Blessed Pope Pius IX proclaimed Mary’s Immaculate Conception dogmatic Church teaching. 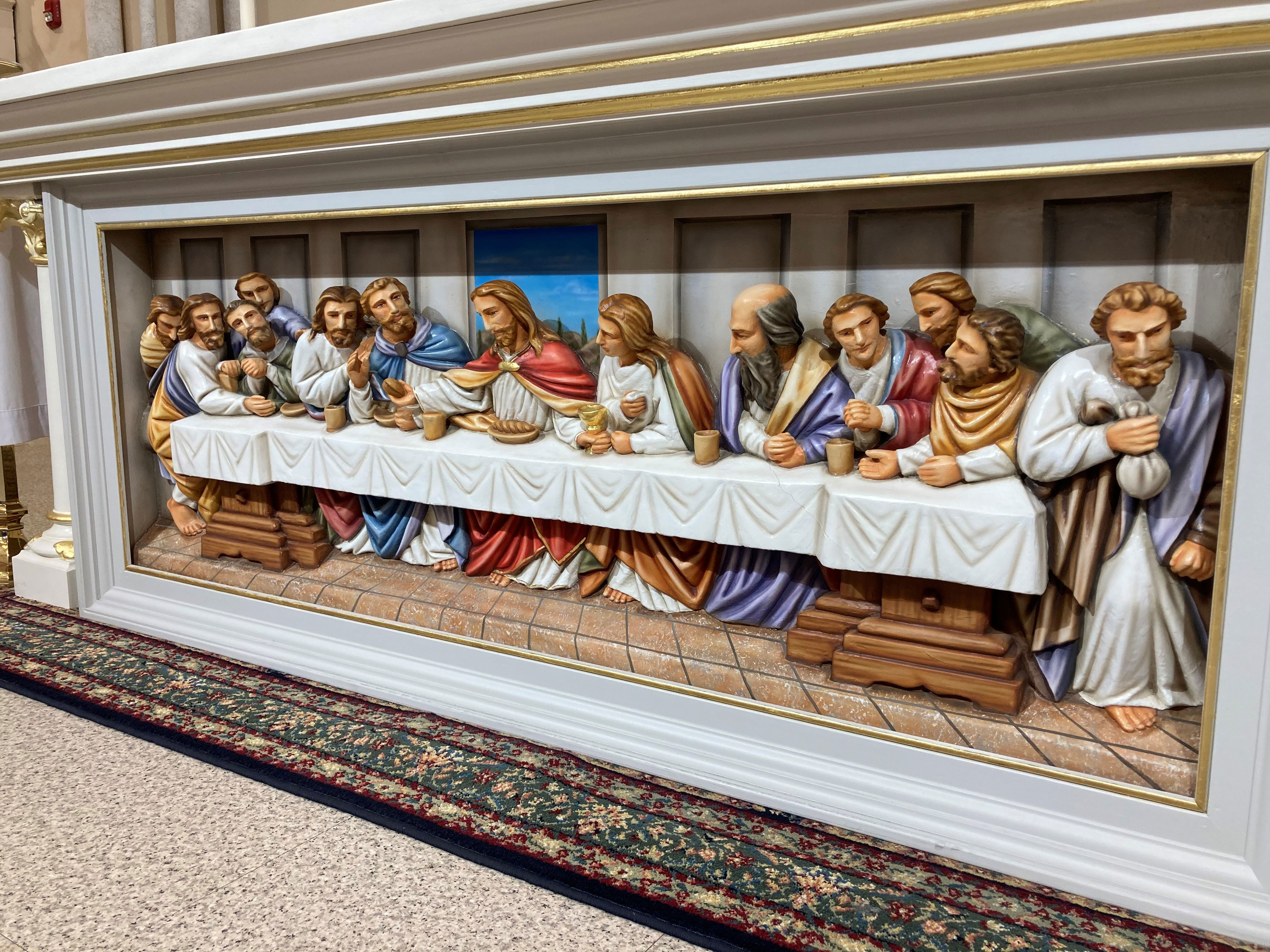 “I believe the beauty of Immaculate Conception is that it is Mary’s church,” said Father John Titus, pastor. “As a parishioner said to me, when you walk in the church, you feel like Our Lady is putting her arms around you. It is named in honor of the Immaculate Conception. The windows and the art focus on Mary and make present Jesus Christ. My favorite thing about Immaculate Conception Church is that it feels like you are home. I am kind of prejudiced as I was born across the street and grew up in Mattoon. This just feels like home base. This is where it all begins.”

Some of that beauty includes the richly colorful depiction of the Last Supper on the front part of the altar, detailed images of the Stations of the Cross, several statues of saints, the striking shrine altar of Mary including a statue of her crushing the serpent, and a bright, white high altar with gold trim that makes Jesus and the tabernacle the central focus.

Beyond the beauty, the history at Immaculate Conception is also deeply rich. In 1892, the diocese’s own now Venerable Father Augustine Tolton, the nation’s first black priest and a native of Quincy, came here to preach.

“There wouldn’t have been many African Americans in Mattoon at the time,” Father Titus said. “But Father Tolton was well received and many, many people came to see him.”

Father Titus also looks back on another historical moment in the parish, that of Father James Dunne, who after the first World War, died of the Spanish flu.

“He was much loved,” Father Titus said. “He had probably the largest funeral ever to take place in Mattoon. A lot of prayerful folks have been a part of this building.”

The church has seen several physical changes over the decades. A fire in 1890 destroyed practically everything. It is believed however, that what is called the beehive stained-glass window, which is located in the bathroom, survived the fire and is original. After the fire, Mass was held in the old church on Richmond Avenue until a dedication in 1891. Three new bells were cast in St. Louis specifically for the church and named by their benefactors: St. Mary, St. Joseph, and St. Patrick. 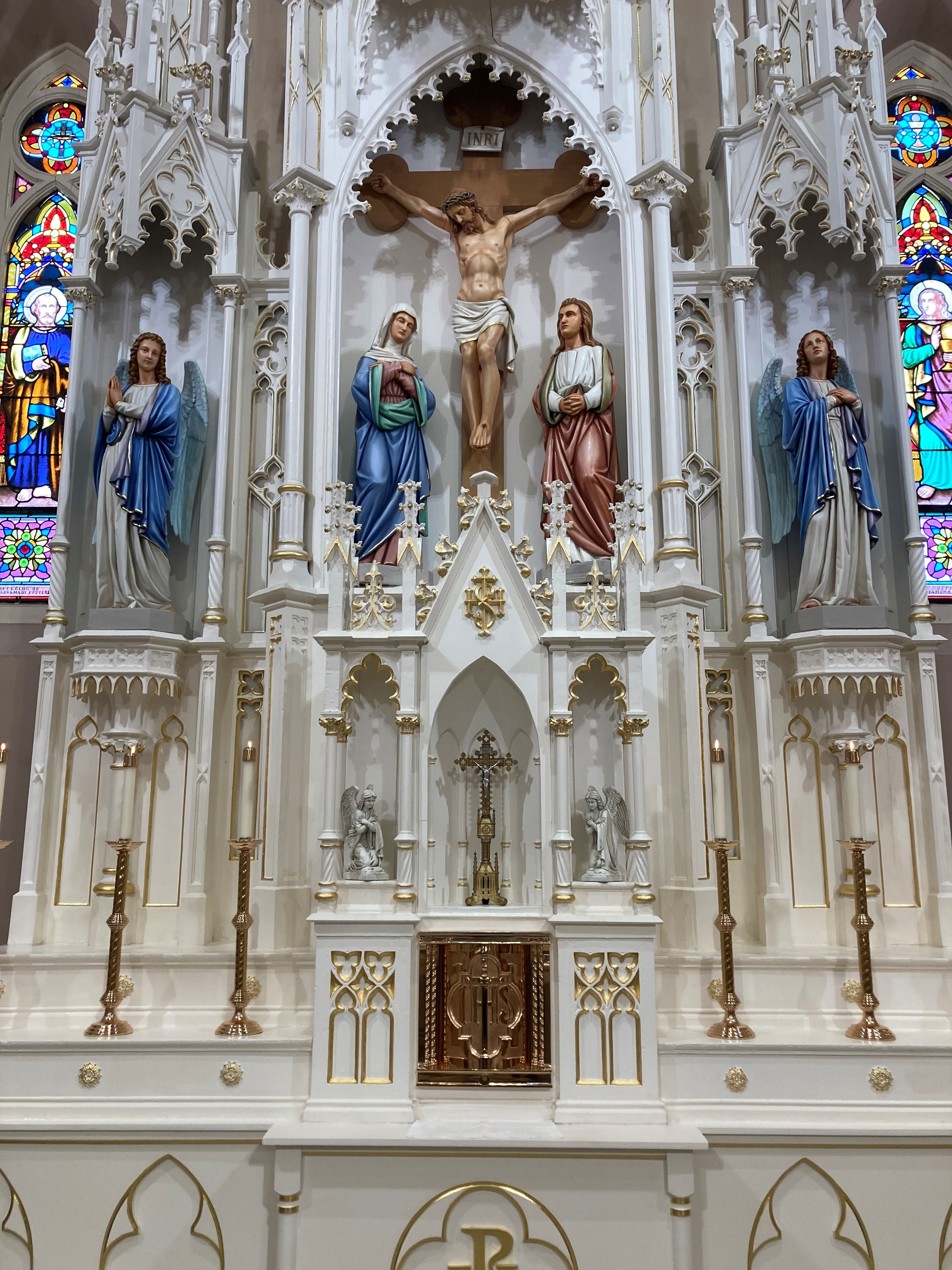 In 1934, the main altar, statues, and Stations of the Cross were refurbished. Then, in preparation for the Jubilee Year 2000, a major renovation occurred. The interior of the church was painted, carpet removed, among other interior changes.

In 2018, a new altar incorporating the Last Supper relief was built by parishioner Henry Unkraut and parish craftsmen. Decorative molding was added to the back and side altars and the side altar reliefs were painted to complement the Stations of the Cross.  In 2019, icons of the Luminous Mysteries, which completed the rosary windows, were written by Sher Lanham and Karen Boshart of Red Shoes Art Studio in Charleston and mounted in the side chapel.

In 2019, a statue of St. Mother Theodore Guerin (who is buried near Terre Haute, Ind.) was placed in the sanctuary, a gift of parish alumni of St. Mary-of-the Woods College. Then, in 2020, sections of an altar rail were restored on each side of the front of the sanctuary.

Other treasures inside Immaculate Conception include a solid marble Pieta in the side chapel which came from Italy and is dated 1909. The windows on the back altar are in honor of Sts. Peter and Paul, patrons of the Cathedral Church of what was the Diocese of Alton, which then became the Diocese of Springfield in Illinois. The top part of the St. Peter window was installed in error says Father Titus as it shows an upright cross with an upside-down crown. The prince of the Apostles was crucified on an upside-down cross.

For Father Titus, despite all the physical beauty and rich history at Immaculate Conception Church, what he thinks about the most are the countless numbers of souls who have worshipped here. “The baptisms of the thousands,” Father Titus said. “All the different priests and people who have been present and beginning their journey, right here.”