Just before Christmas, people who are twins celebrate National Twins Day on Dec. 18. It is estimated that 1 in 250 pregnancies will naturally result in twins, which makes being a twin rather unique. 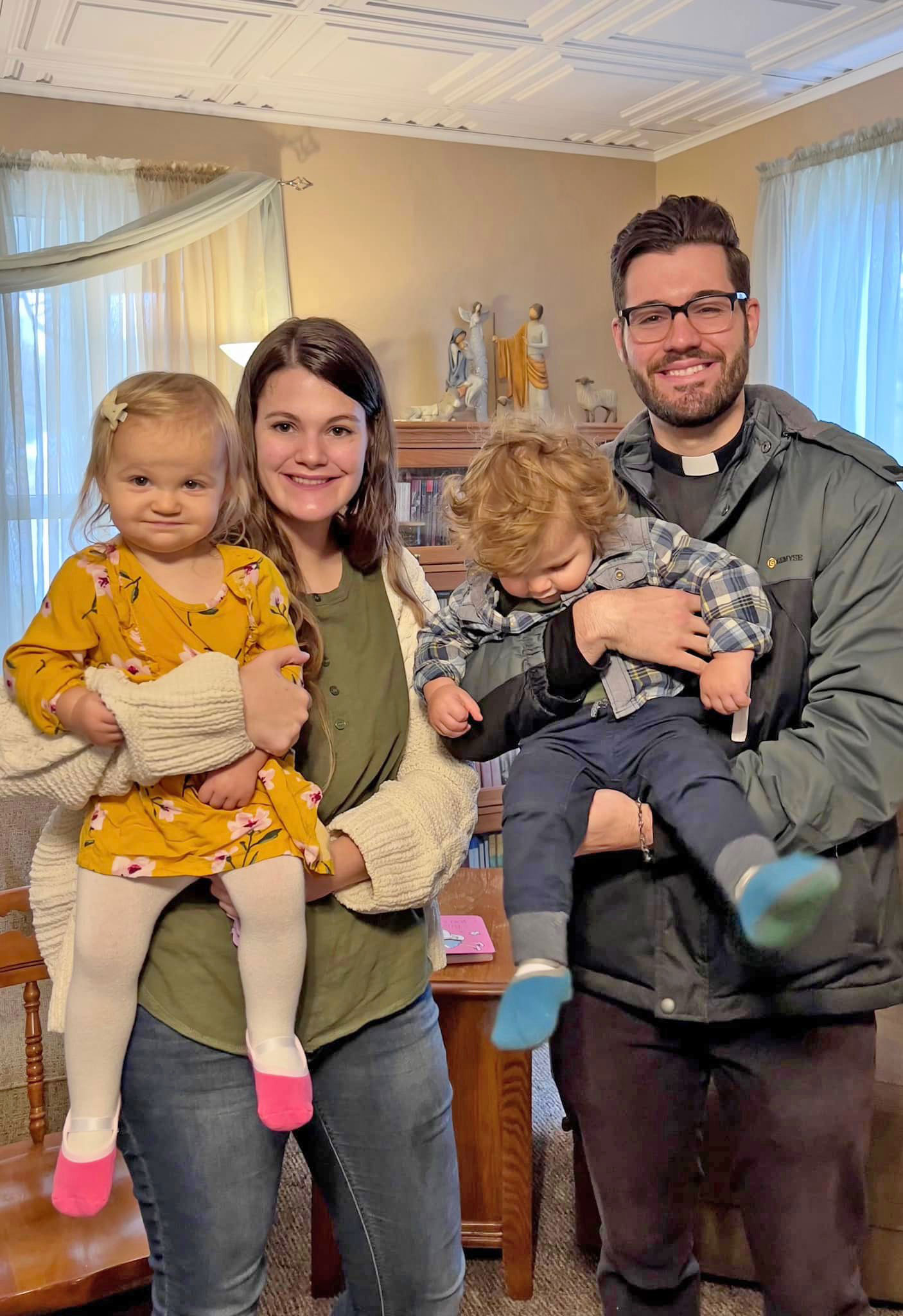 In the Diocese of Springfield in Illinois, several priests grew up with a twin, including Father Brian Alford, Father Dean Probst, Father Rafal Pyrchla, Father Dominic Rankin, and Father Michael Trummer. Interestingly, all these priests have a fraternal twin and all but Father Pyrchla have twin sisters.

Many people know that Father Michael Trummer has a brother very close to his age who is also a priest — Father Chris Trummer — but not as many know that he has a twin sister as well. Her name is Katrina Joy, and they were born on March 10, 1992. With three of their four children born in 16 months, it goes without saying that their parents had a very busy household for many years.

Young Michael and Katrina were close growing up, said Father Trummer, parochial vicar at Our Lady of Lourdes Parish and St. Thomas the Apostle Parish, both in Decatur.  “We weren’t best friends, but not super distant, either. But apparently we have the same Meyer’s Briggs (Type Indicator) personality.”

Like many siblings, the two children got into trouble once in a while. “One time I asked my sister if I could cut off some of her hair. We were in kindergarten at the time,” Father Trummer said. “She was hesitant, but I begged her to let me just cut off a little bit with our kitchen scissors. She conceded, but I cut off several inches right in the back of her head.  It was the day before picture day!”

Now that Katrina Schoenfeld is grown and married, she is raising her own twin babies, Tucker and Clair, and is in the middle of getting her master’s degree in clinical social work. “I baptized one of the twins, and my brother, Father Christopher, baptized the other one.” 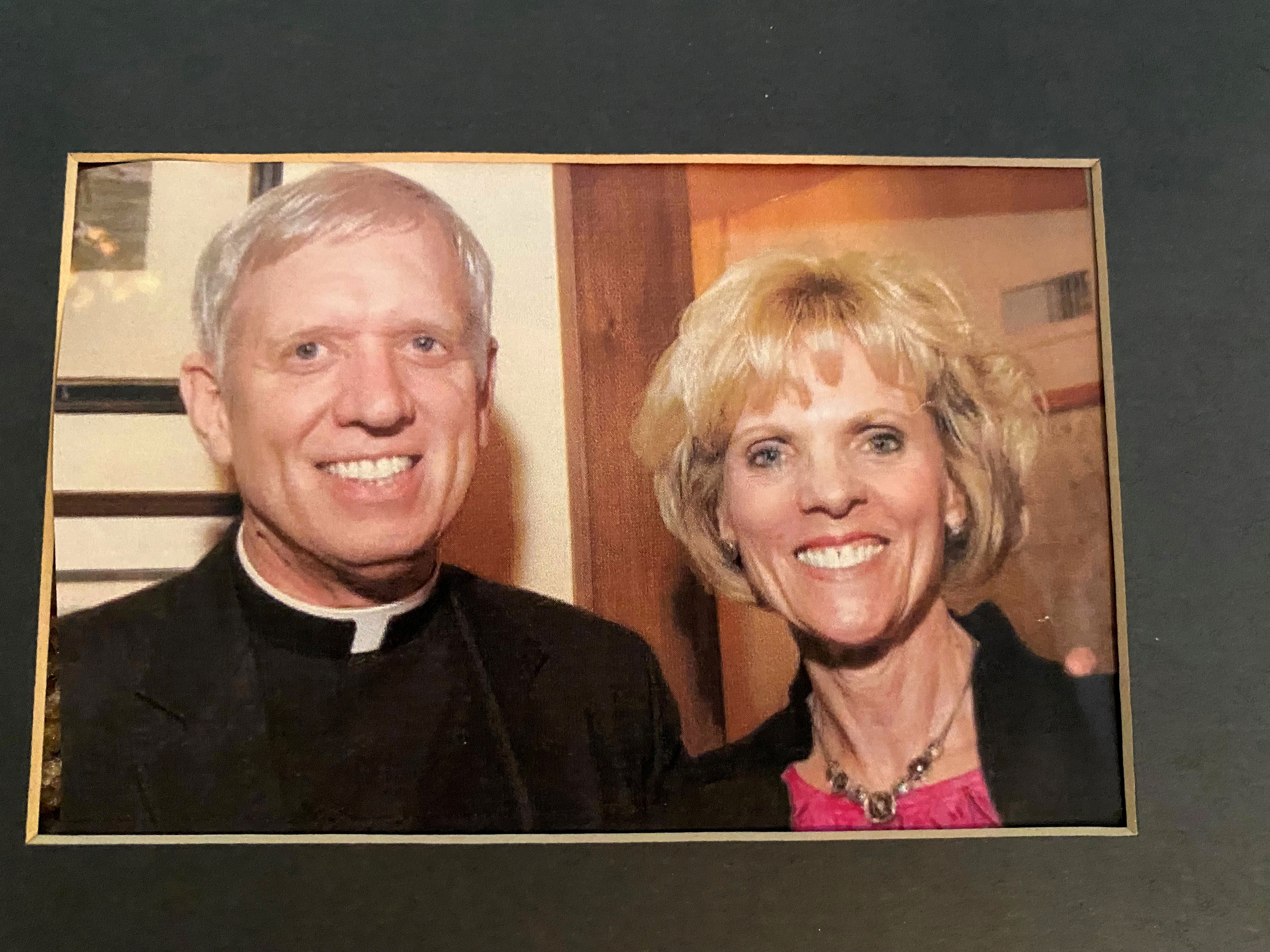 Ronald Dean Probst and his sister Constance Jean Probst were born on Oct. 22, 1952, in Flora. “We were born in the Flora hospital as St. Anthony Hospital in Effingham had burned down several years earlier and wasn’t rebuilt,” said Father Dean Probst, who is pastor at St. Thomas the Apostle Parish in Newton and St. Mary of the Assumption Parish in Sainte Marie. “The doctor said that since Mom was having twins, she should deliver in a hospital.

“Mom wanted our names to rhyme so it was Ronnie Dean and Connie Jean.  Dad asked, ‘Who would name their child Constance?’ and my mom said, ‘You did!’ So we went by our middle names, Dean and Jean. I was the first-born son, and she was their third daughter. I was an hour older by birth.”

Father Probst recalls hearing that his mother was overwhelmed knowing she was having twins. “Our mother was apprehensive about having twins with two children all within four years,” he said. “She cried to her mother about how she would manage, when Grandma had 11 children!”

Father Dean said he and his twin sister are supportive of one another and were “very close in grade school and high school.” He was a groomsman in Jean’s wedding when she married her husband, Dan Cunningham. The couple had two sons. Jean Cunningham is now a retired schoolteacher who lives in Mattoon. 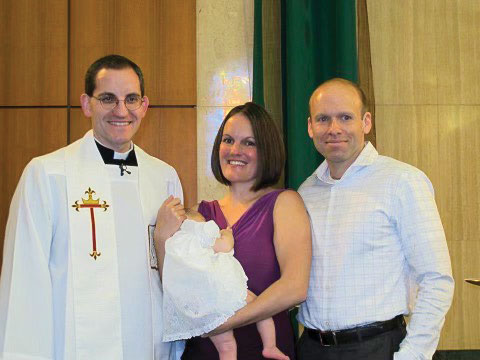 Father Brian Alford and his twin sister Cindy were born on March 9, 1979. “Although we were born pretty well on time and at healthy weights, I had some breathing difficulties which required me to spend a little extra time in the hospital before finally coming home,” said Father Alford, rector at the Cathedral of the Immaculate Conception and vicar for Clergy, Consecrated Life and Vocations.

Growing up, Father Alford said he “doesn’t recall being too mischievous” and said he and Cindy were “pretty close.” “We were both involved in band and had several mutual friends. It was my twin sister who first told me that she thought I was going to become a priest.” Father Alford went on to witness his sister’s marriage and then baptized both of her children. Cindy Bushnell now lives in Houston, Texas and is involved in health and wellness work.

“Looking back, it never seemed really too different having a twin sister,” Father Alford said. “Thankfully we got along together and still do to this day. I have a good relationship with all of my siblings, but I obviously feel closest to my twin sister, and I am grateful that the Lord blessed my life with this unique gift.” 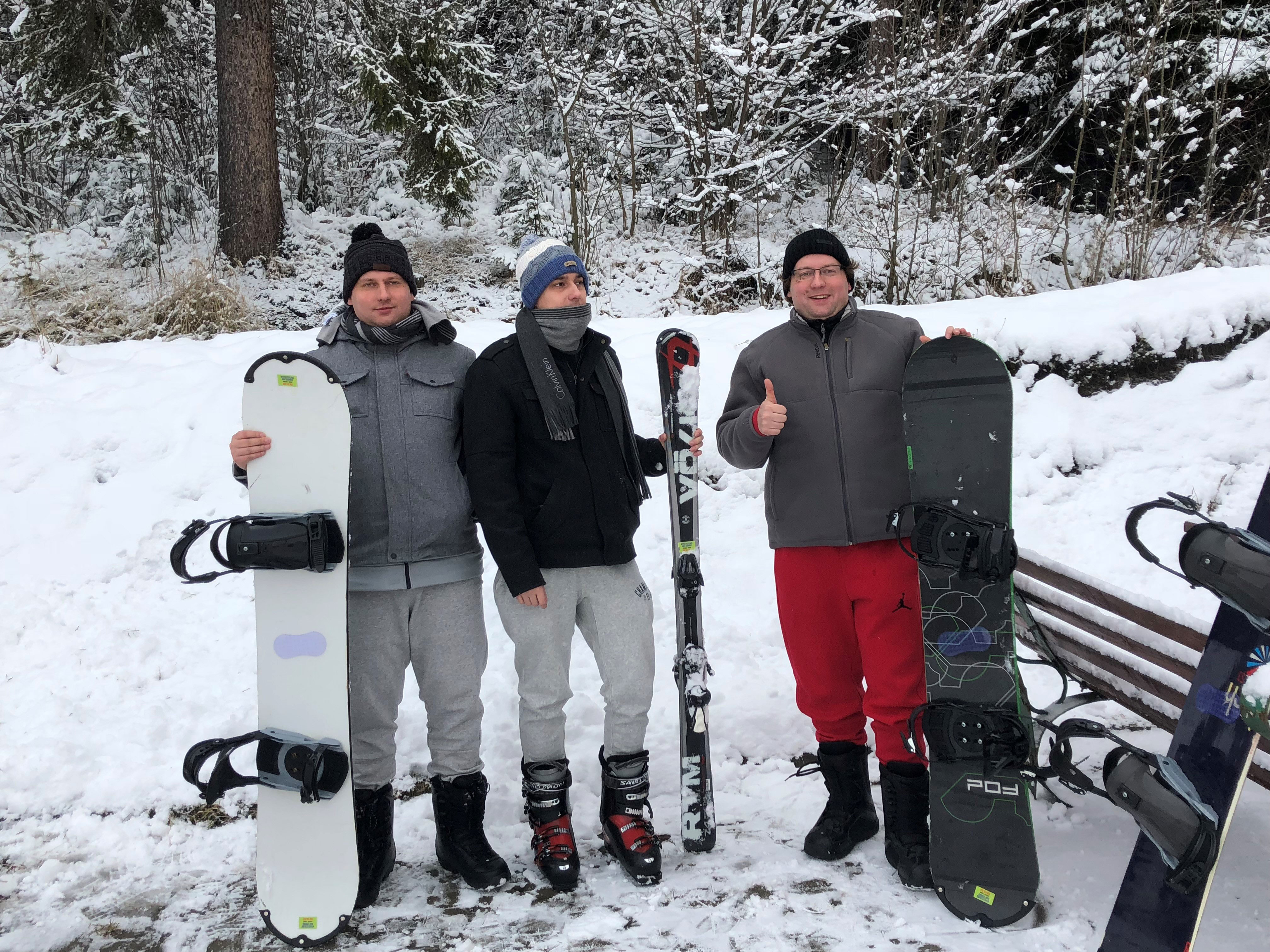 Father Rafal Pyrchla and his twin brother Bartlomiej were born April 13, 1986, in Poland. “As far as I know we were full term, approximately 5 pounds each,” said Father Pyrchla, parochial vicar at St. Francis Solanus in Quincy. “I was the second born, he is 10 minutes older than me.” Bartlomiej is now a carpenter in Straszecin, Poland.

In school, teachers couldn’t tell the Pyrchla brothers apart. “That was very funny. We always sat at the same desk in school. We were very close. We wore the same clothes. People, even the close family wouldn’t recognize (the differences in) us, who is who,” Father Pyrchla said and added with a wink, “I am more handsome.”

Although Bartlomiej was supportive of his twin brother becoming a priest, Father Pyrchla said, “It was hard for him when I decided to join the seminary. Still, he was very happy for me, and he came with our mother to the U.S. for my priesthood ordination.” Now that they live so far apart, the brothers communicate by Skype. 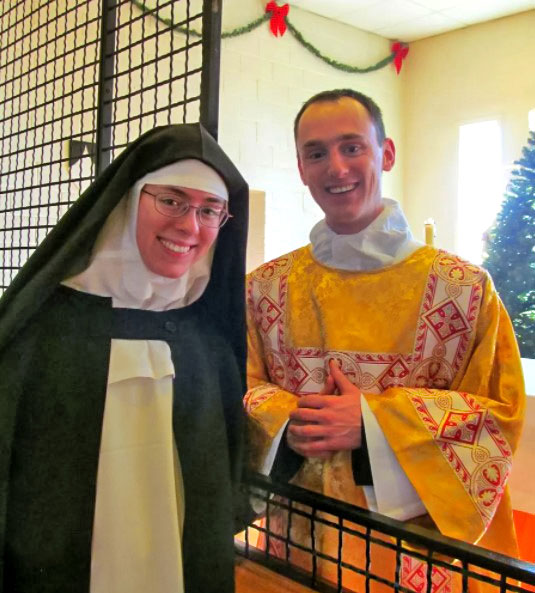 Another diocesan priest who is a twin and has another religious vocation in his family is Father Dominic Rankin, Master of Ceremonies and priest secretary to Bishop Thomas John Paprocki and associate director of the Office for Vocations. He and his twin sister, Sister Mary Thomas of the Holy Name of Jesus, OP (born Nicole Therese) came into the world very prematurely in May 1993.

“We were due around July 23, but born on May 9, which meant both of us were very small — I was 2 pounds-something and my sister was 1 pound-something — and had a lot of developing still to do. Providentially, my parents were in St. Louis visiting with my dad’s parents, which meant some of the best neonatal facilities were a quick rush across the road when my mom went into labor all those weeks early rather than the hours it would have taken from Quincy to get to St. Louis or Springfield.

“It was touch and go for those 100 days, with plenty of lung, heart, brain, and nutrition challenges all throughout — and my parents said I kept them on pins and needles for several months after coming home when I would decide to stop breathing for heart-wrenching spans, which meant we had oxygen tanks and monitors to decorate the nursery!”

When they were a little older and healthier, the twins became even more in tune to one another, Father Rankin said. “Mom and Dad say that when we were very little, we had our own language to communicate with each other before we started speaking English. We would run into the room together, chatter something to each other, and start laughing about whatever it was we were scheming before scattering out of the room, with Mom and Dad uncertain what ruckus was about to transpire.”

Father Rankin believes his sister to be a brave woman who, while she was still a teenager, put her trust in God, applied and was accepted to the convent where she would eventually take vows. She is a cloistered and contemplative Dominican Nun in Marbury, Ala.

“I was present for both my sister’s temporary profession in fall 2015 and her final vows in January of 2018. In the first case, I had just begun my studies in Rome at the North American College, so I was not ordained, but did assist at the Mass as a seminarian. In 2018, I was a transitional deacon, preparing to be ordained a priest that May, and was blessed to assist the bishop there for her final vows as a Dominican nun.”

Father Rankin said that because he had spoken about being a priest from his early childhood days, his twin sister knew about his thoughts as they grew up. “By the time I got up the courage to ask the diocese about entering seminary, she had already been accepted to the convent, so at that particular junction it was by means of letters we exchanged that I broke the news to her,” he said.

He has even more thoughts on that subject. “Although we cannot read each other’s minds, she as a consecrated contemplative nun has a very close connection with Jesus, and He knew I was called before I did,” he said. “So, I wonder if the Lord broke the news to my sister before I got around to it.”

While Fathers Probst, Alford, Trummer, Rankin, and Pyrchla grew up with their siblings, Father Daren Zehnle was born a twin, but sadly lost his brother about 36 hours after their birth. Father Zehnle, pastor of St. Augustine Parish in Ashland, has often pondered how his life has turned out and what it might have been like to grow up with that boy.

In his blog, Servant and Steward, Father Zehnle shared that he and his brother, Matthew William, were born at St. Mary’s Hospital in Quincy on March 26, 1978, about seven weeks before their due date. It was Easter Sunday, and most of central Illinois had been shut down because of a serious ice storm.

Matthew was born at 10:04 a.m. and weighed 5 pounds and 2 ounces. At 10:12 a.m., his twin brother Daren was born, weighing 4 pounds and 9 ounces. “Both Matthew and I were born with a blockage of some kind in our throats, which made breathing very difficult,” Father Zehnle wrote. “Matthew was viewed by the medical team as the stronger of us, while I was seen as the weaker and not expected to live long.”

Since the twins were both in danger of death, a priest was called to baptize them. “Father Landry Genosky, OFM, came and not only baptized us, but confirmed us as well, a privilege granted to priests for those in danger of death. We had neither godparents nor sponsors and, to my knowledge, no confirmation names. I am simply Daren Joseph,” wrote Father Zehnle.

Sadly, Matthew died at 10:38 p.m. on March 27. At some point a tracheotomy was performed on little Daren. “I’m not sure if this was done before or after Matthew died. The tube remained for the first two or three years of my life, and I still bear the scar to this day,” wrote Father Zehnle, who wonders how life must have been for his late parents.

“Mom wrote that ‘the first three months have been bad. I spent two days in the hospital for dehydration.’ I’ve no idea how my parents coped with the death of their firstborn child together with my difficult first few years,” he wrote. “If they had a baby book for me, I do not know where it is, but I do have Matthew’s baby book. It is an odd feeling to flip through a baby book with only a couple pages filled in and I can well imagine why they may not have kept one for me.”

Father Zehnle wrote he has other thoughts on his life. “I’ve often wondered why I, the weaker one, survived. My arthritis too, before it was finally diagnosed, brought me near to the point of death, and yet I survived. I see in these pivotal moments of my life the protective hand of God.

“And though he lived only slightly more than a day,” he wrote, “there is a part of me that longs for the companionship of a brother and confidant, even a partner in mischief, which I know is the bond shared by twins.”