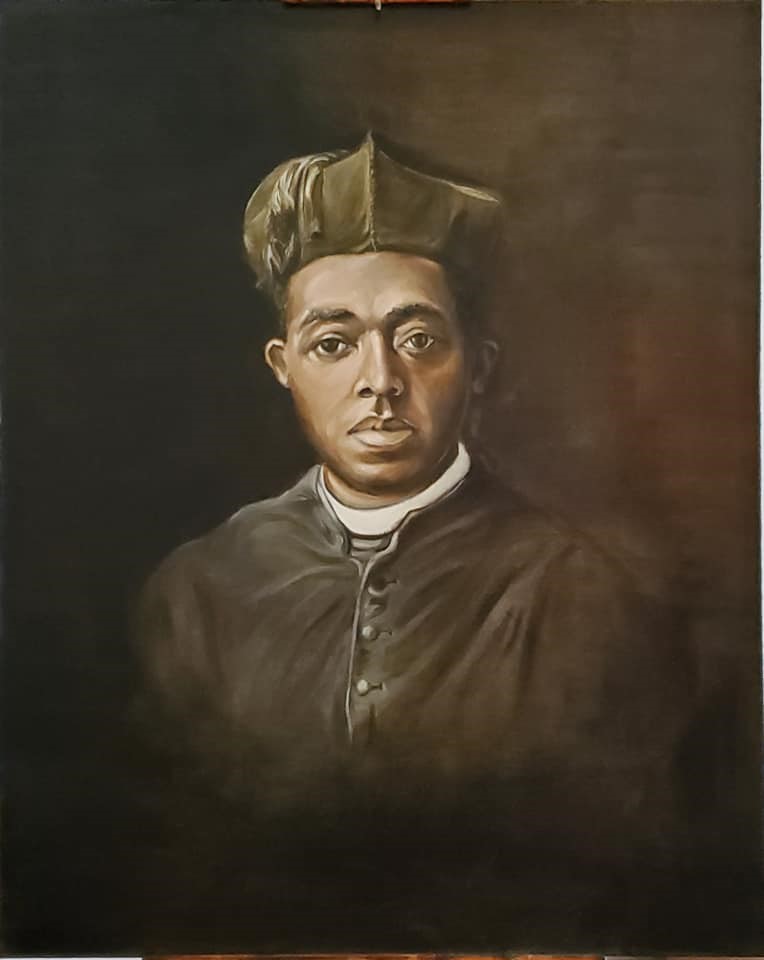 It started with Father Jeffrey Goeckner, pastor at St. Boniface Parish in Edwardsville, approaching parishioner and artist Nancy Jatcko in 2018. To celebrate the parish’s jubilee, Father Goeckner’s celebration plan included having paintings of St. Boniface, several other saints, and Venerable Father Augustine Tolton, the nation’s first black priest who grew up and ministered in Quincy, hang inside the church.

“The opportunity to paint holy men and women for those who walk through St. Boniface's doors was an incredible opportunity,” Jatcko said. “It was a blessing to be able to tell stories about the saints, especially Father Tolton.”

Using oil on canvas, Jatcko created this masterpiece (right), which was hung and blessed for veneration by Bishop Thomas John Paprocki at St. Boniface during the jubilee Mass and celebration of the parish on Sept. 15, 2019. It hangs inside the church today.

“I felt invited to a private encounter with this holy and courageous priest,” Jatcko said. “As I painted, I reflected on his life and the sacrifices he made as the first black priest in our country to bring the Gospel to the people of Quincy and, eventually, Chicago. The task of doing him justice seemed daunting at first, but there was a special connection to Father Tolton through another great saint to whom I have long had a devotion, St. Katherine Drexel. Father Goeckner had seen a portrait I had painted of her and asked if I would take on the St. Boniface project. St. Katherine Drexel had been responsible for sending support to Father Tolton as he ministered to his parishioners in Chicago. I would say that divine providence definitely had a hand in the portrait of Father Tolton.”

Father Tolton was born into slavery in 1854 in Missouri. In 1862, his mother and siblings made a daring escape across the Mississippi River to Illinois. After settling in Quincy, he went to school at St. Peter’s Catholic School. Tolton later went to seminary school in Rome because no American seminary would accept a black man. Thinking he would minister in Africa, once he was ordained, he was instead sent back to Quincy, where he arrived to thousands of supporters. Known for his incredible singing and homilies, Father Tolton spent several years in Quincy before transferring to Chicago. He died of heatstroke at the age of 43 on July 9, 1897, and is buried at St. Peter’s Cemetery in Quincy. Pope Francis declared him “Venerable” on June 12, 2019, the second step of four to becoming a saint in the Catholic Church.

As we celebrate Black History Month in February, see page (WHAT) to learn five things you probably didn’t know about this holy man who lived a life of heroic virtue.