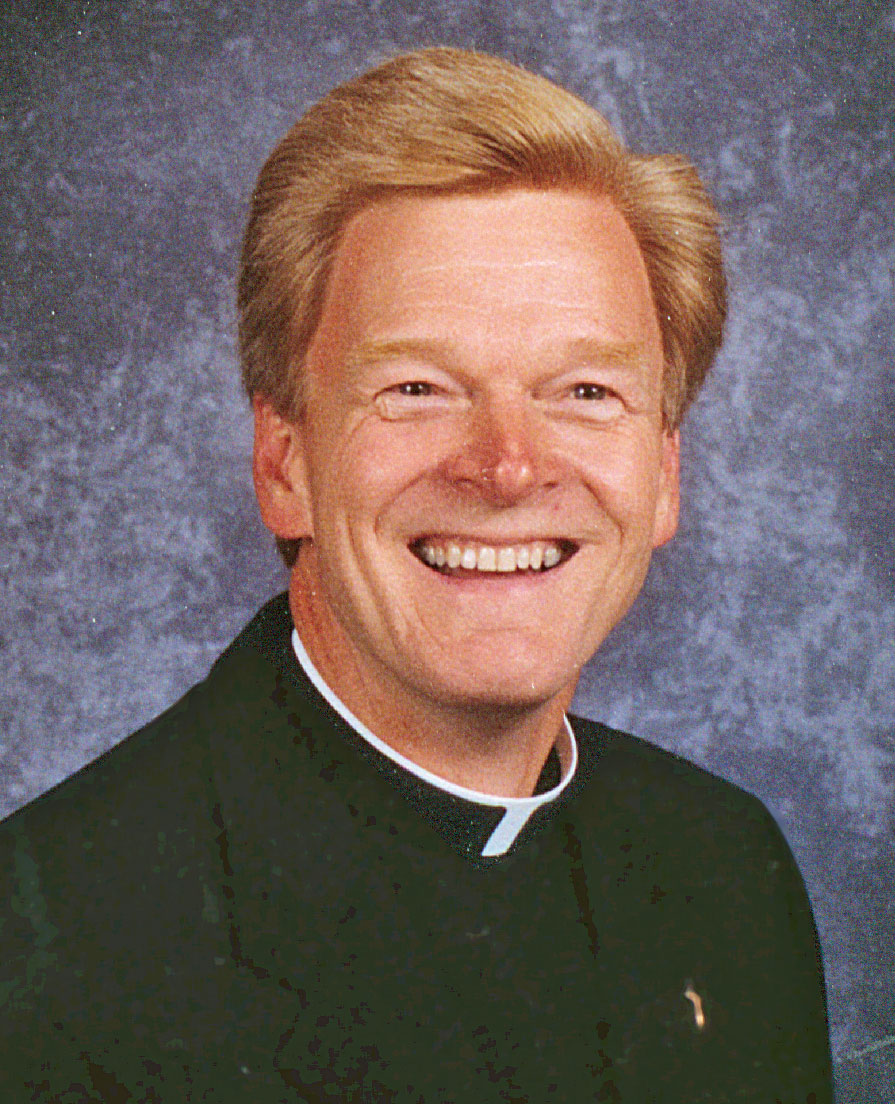 Springfield native Father John Beveridge grew up in the see city, where he, his parents and his siblings were members of Ss. Peter and Paul Parish. He attended Ss. Peter and Paul Grade School and then graduated from Griffin High School in 1964. He began his studies for the priesthood at the Diocesan Seminary of the Immaculate Conception on Lake Springfield and attended St. John’s Seminary in Little Rock, Ark., before continuing his studies at Our Lady of Angels Seminary in Quincy, and then completing his training at Kenrick Seminary in St. Louis. On May 27, 1972, he was ordained to the priesthood by Bishop William A. O’Connor at the Cathedral of the Immaculate Conception in Springfield.

Over the last 50 years, Father Beveridge has held a number of assignments. He was an assistant at St. Paul in Highland from 1972 to 1976, at St. Anthony in Effingham from 1976 to 1980, at Our Lady of Lourdes in Decatur in 1980, and at Cathedral of the Immaculate Conception in Springfield from 1980 to 1984. In 1980 he was also a pastoral consultant in the Catholic Education Office.

He was named parochial administrator of St. John the Baptist in Quincy in 1984, before being named pastor there that same year. He remained pastor at that parish until 1999. He was also pastor of St. Brigid in Liberty and St. Thomas the Apostle in Camp Point from 1991 to 1994. He was dean of the Quincy Deanery from 1996 to 1999. In 1999, Father Beveridge was for a brief time parochial administrator of All Saints in Quincy. In 1999 he also began his longest assignment when he was named pastor of Ss. Peter and Paul in Collinsville, where he has been serving for almost half of his priestly life.

“It is a very humbling experience to look over all these years and realize how quickly they have gone,” Father Beveridge said. “There are many challenges, yet the Lord is always there, healing and strengthening for the mission that needs to be done. Each year has been a blessing whether it held a challenge, a question, or sheer joy and happiness.”

He says the Eucharist is his greatest joy. “It is the Easter celebration all over again. To share in that same Eucharist that has taken place over these many centuries brings me to my knees. He loves us with such a deep love, despite our weaknesses and sinfulness.”

Developing ministries, identifying gifts, and helping people use them for the good of the community is one of the most important parts of being a pastor, he said. Through it all, his parishioners have “embodied God’s love in an extraordinary way.” “May God bless them for their love, prayers and support over these many years,” he said.

On July 1, Father Beveridge will be assigned as pastor emeritus of Ss. Peter and Paul Parish in Collinsville. 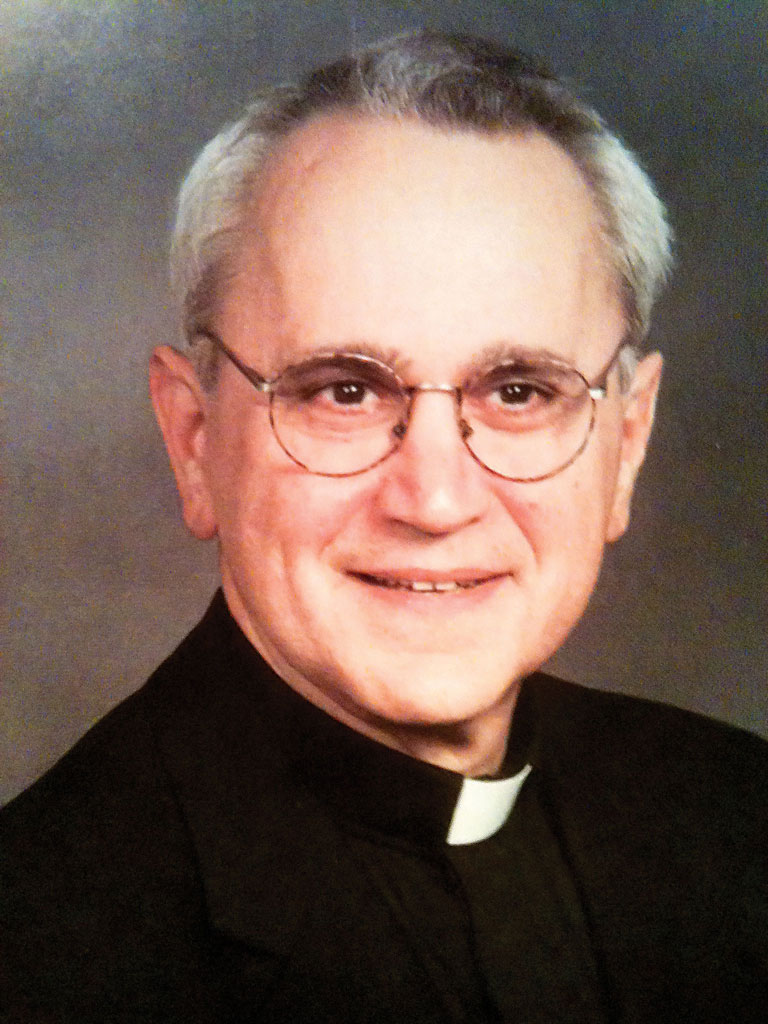 Another Springfield native, Father Richard Chiola, was ordained by Bishop William A. O’Connor at the Cathedral of the Immaculate Conception on May 27, 1972.

Looking back, Father Chiola says he was blessed to grow up surrounded with family and friends “who knew Jesus, went to church, and prayed.” He especially credits his late mother, Faye Chiola, for helping him discover his vocation.

His first assignments were as associate pastor of St. Thomas in Decatur, St. Agnes in Springfield, and St. Bernard in Wood River. From 1984 to 1988 he was parochial administrator and then pastor of St. Louis in Nokomis and St. Barbara in Witt.

“I remember after seminary I felt the need to continue my study of theology, so that I could explain our Catholic faith more clearly. Study and prayer kept me close to God. I did my postgraduate studies while I worked in parishes,” he said. He says the Ignatian Exercises, the 30-day retreat, was “formative of my prayer and practice of spiritual direction … .”

Father Chiola has a Ph.D. in historical theology and a master’s in human development counseling, is a licensed professional counselor and certified sexual addiction therapist, worked in the Tribunal, and has taught at various universities. He worked with the Franciscan Hospital Sisters on integrating the Catholic healthcare mission in their hospital system.  For more than a decade he was a therapist and spent a few years teaching doctors how to become psychiatrists at SIU School of Medicine. Additionally, he has authored a book and served for a decade on the U.S. Catholic China Bureau’s Board of Trustees. He also gave retreats and workshops with the Missionaries of Charity in Central and South America.

After many years teaching and serving in other areas, Father Chiola returned to the Springfield diocese. “When my father was dying in 2000, I moved back to the diocese until retirement,” he said. He was diocesan director for the ongoing formation of clergy for six years and the delegate for clergy health and wellness for three years. He was parochial vicar at Blessed Sacrament in Springfield, at St. Agnes in Springfield, parochial administrator of St. Augustine in Ashland, and finally pastor at St. Frances Xavier Cabrini in Springfield from 2004 to 2015, when he became pastor emeritus at that parish. He also served as parochial administrator at St. Joseph the Worker in Chatham in 2016.

Father Chiola is currently writing another book, continues to work as a spiritual director, assists in parishes as needed, and sometimes gives retreats and workshops in various dioceses and to religious women. “Next fall, I will teach a course in pastoral care at Aquinas Institute, a Dominican graduate school of theology in St. Louis. And this summer I will conduct a reading course for a priest from a Chinese seminary,” he said.

Looking back on the priesthood, Father Chiola surmises that he emphasizes a personal relationship with Jesus, and prayer. “There is one thing that cannot be avoided, that is suffering. Priesthood is not a career but a sharing of fullness of what the Spirit of God is doing in you. You will only be as compassionate toward God’s people as you are aware of God’s compassion toward you.” 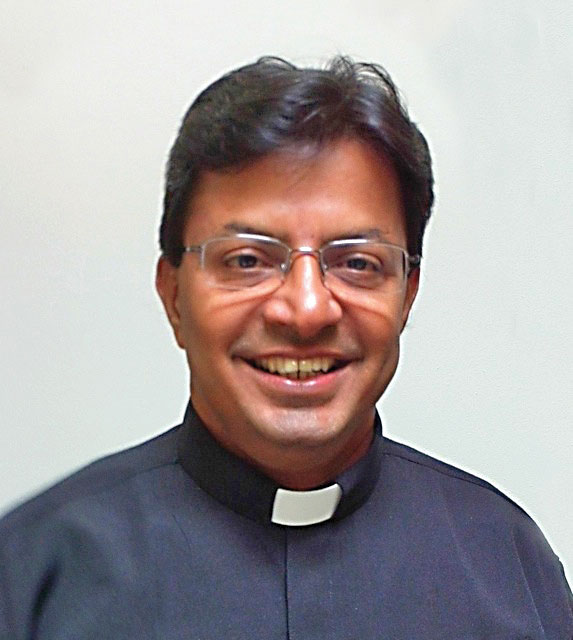 Father George Nellikunnel was born into a traditional Catholic family in India and entered the seminary as a teenager in 1984. He was ordained a priest on April 30, 1997.  “My parents were farmers, and I am the third in line of seven children,” he said. “My sisters and a niece are religious sisters.”

During his earlier years as a priest, Father Nellikunnel served in a variety of places, often with youngsters. “I have participated in the International Catholic Agriculture Rural Youth Movement with my training in Germany and Sri Lanka. I have participated in the World Catholic Youth Day in Germany and Asian Catholic Youth Day in Hong Kong and in India, also worked for six years as a regional youth director in rural areas of Western and Central India and organized national and regional youth conventions for 16 dioceses.

“I was very active with many youth groups and organizations in India,” he said. “I served as a pastor, manager, and principal of a school in Delhi for three years and then continued to work in the African land of Zambia as a pastor.”

Having worked in the African mission areas of Zambia, Father Nellikunnel was asked to discern work in the United States and to support the Zambia mission. “Then the Springfield diocese needed priests and I was asked to come and minister to the diocese,” he says. He came to work at St. John’s Hospital in Springfield, where he served as chaplain from 2014 to 2019. He has also been in various parishes, serving as pastor of St. John Vianney in Sherman from 2015 to 2021, Holy Family in Athens from 2019 to 2021, and at St. Aloysius and St. Frances Xavier Cabrini, both in Springfield, from 2021 to the present time. Before COVID, he was able to visit his family in his home country once a year.

Although he was incardinated with the Pallotine Fathers and Brothers, he is now ad experimentum in the Diocese of Springfield in Illinois.  “What I like here is the vibrant Catholic communities, rooted in Jesus Christ with the spirit of joy and collaboration and sharing Jesus through Eucharistic celebration,” he said. “The favorite aspect of my priesthood is the celebration of the Eucharist. Every priest is called to be a eucharistic priest. Without priests there is no Eucharist and without Eucharist there is no salvation.”

Father Nellikunnel says the sacrament of confession is also especially important. “Another favorite sacrament for me as a priest is confession, because I have found unconventional mercy of God in it,” he said. “If I am merciful to others in my ministry and teaching, it is because I have been shown great mercy. Confession has proven to be the reminder of my own weakness and need for the mercy of God to live well this earthly life.”

When a young man believes he has a vocation to the priesthood, Father Nellikunnel suggests “praying well to make the right decision” and “trusting in the Lord and His plan.” “It is not your desire, but God’s call and you need to make lots of sacrifices to follow the path of Jesus,” he said. “Attend daily Mass and pray the holy rosary. The Blessed Mother will inspire you and guide you to take the right choice.” 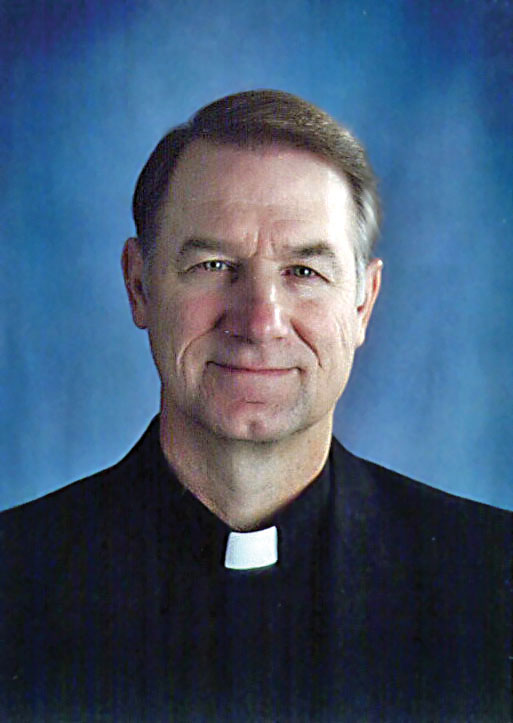 Father Mark Schulte was ordained May 24, 1997, at the Cathedral of the Immaculate Conception in Springfield. Prior to becoming a priest, he was in the Army, where he was a skydiver and paratrooper in the 82nd Airborne Division. He then received a degree in agronomics (crop science) and worked as a production manager for various tree and shrub nursing productions. However, his vocation to the priesthood was with him for years, he says.

“I was ordained a priest at the age of 45. But the calling to priesthood started long before that,” he said. “There was no particular event that influenced me to be a priest, but many smaller things along the way, such as a strong Catholic family life while growing up, being an altar boy, praying the rosary, devotion to the Blessed Mother, and reading Catholic devotional books.”

Father Schulte’s first assignment was as parochial vicar at St. Agnes in Springfield. While serving there he also spent a year as chaplain for the University of Illinois at Springfield. From 2001 to 2005, he as pastor of St. Bernard in Wood River, and also spent 2004 to 2005 leading St. Matthew in Alton. He returned to Springfield from 2005 to 2010 and was pastor of St. Aloysius. Since 2010, he has been pastor of St. Mary in Pittsfield and St. Mark in Winchester.

“Every parish is unique in its own way, whether it is a larger parish with a school, or a small-town parish,” he said. “My favorite aspect of being a priest is having the opportunity to minister to people in various stages of their life, but most importantly, having the opportunity to celebrate the sacraments — especially that of the holy sacrifice of the Mass. My favorite sacrament is the holy Eucharist. The mystery of the holy Eucharist, celebrating the real presence of Jesus in the Eucharist is all-encompassing.”

When he isn’t serving his parishioners, Father Schulte likes to spend his time outdoors. He once walked 85 miles raising money to fund a new altar during a renovation project for his church in Pittsfield. “I continue to walk the neighborhood for exercise, but I still hike through the woods and hill country. Walking is an excellent way to pray and meditate.

“I do like to grow things in a garden and in the flower beds,” he said. “My background is in agriculture for the most part. But I also love to read, hunt, fish, and just generally spend time in the outdoors. I have always found it easy to encounter God in His creation; in the mountains, along the river, in the woods and walking in a beautiful field.”

Father Schulte says that the past 25 years as a priest “have been very rewarding” and adds, “Any man who thinks he has a vocation to the priesthood should pursue it.”