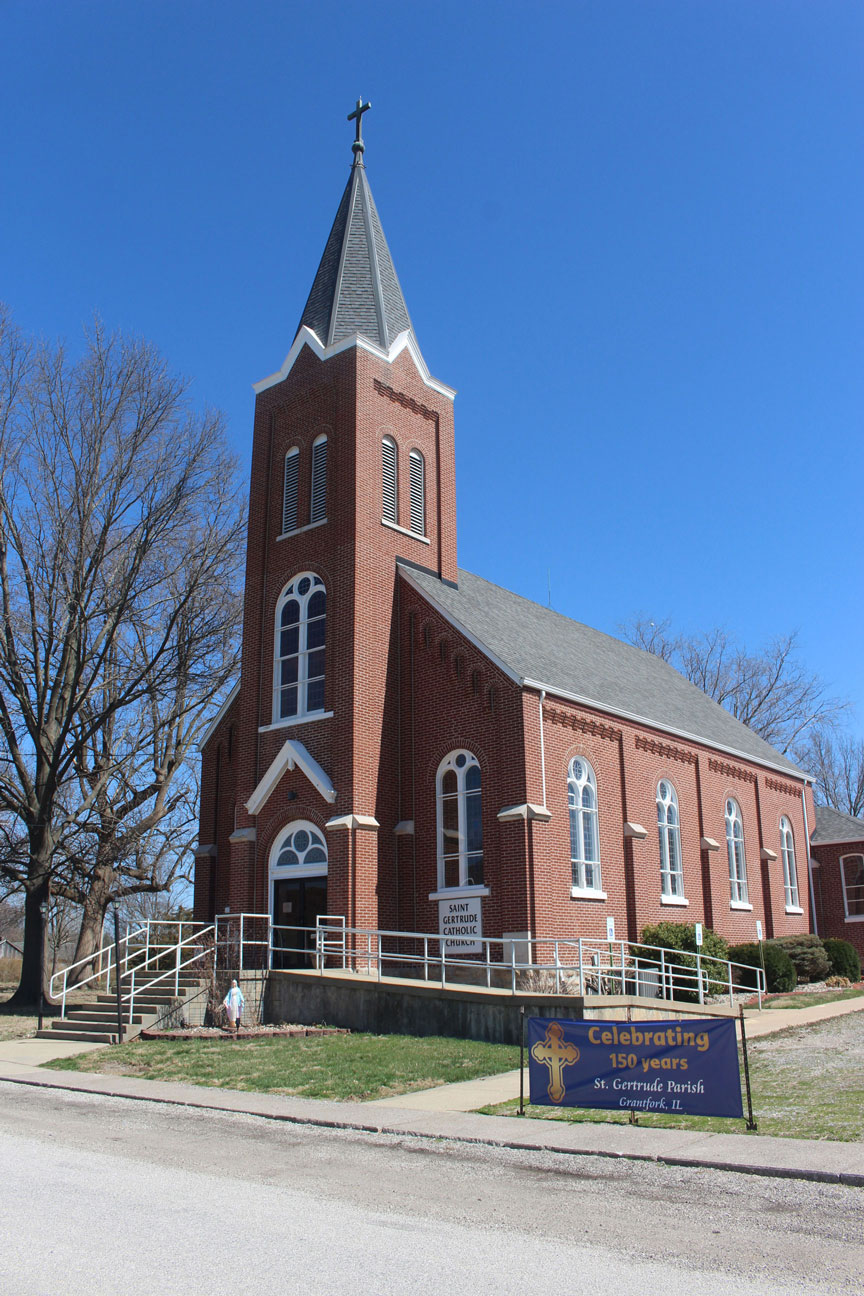 GRANTFORK — On Sunday, May 15, parishioners from St. Gertrude Catholic Church will welcome Bishop Thomas John Paprocki for a celebration of their parish supporting Catholics in Grantfork for 150 years. Bishop Paprocki will celebrate Mass at 10 a.m., followed by a luncheon in the parish hall.

St. Gertrude was established on Sep 1, 1870 — way back when Ulysses S. Grant was president of the United States. At that time, a group of approximately 30 Catholic men from the Grantfork vicinity (then known as Saline) met with Father P. Peters of St. Paul Church in Highland to form a church for their community.  It was a few years before a simple brick structure, housing only those things necessary for worship, was completed in 1872. It stood on a block of ground donated by John Bardill of Grantfork.

The parish was served by priests from St. Elizabeth Catholic Church in Marine until January 1880, when Father Michael Weis became the first full-time priest.  By that time, the parish consisted of approximately 70 families.

A rectory was built in 1878.  Classes were also held there until the school was built. The original church was remodeled and enlarged in 1880 and on Sept. 15, 1881, the church was dedicated by Bishop Peter Baltes from Alton.  Concluding this dedication, Bishop Baltes confirmed 39 people.

The current church was built in spring of 1904 (using suitable material salvaged from the old building) and completed for a June 12, 1905, dedication by Bishop James Ryan from Alton.

A new rectory was built in 1948 and was then demolished in 2020. The parish hall (formerly referred to as the confraternity hall) was completed in 1968.  It was dedicated on May 26, after which Bishop William A. O’Connor of the Diocese of Springfield in Illinois administered the sacrament of confirmation to both children and adults of the parish. The pastor at the time, Father Edward Groesch, said the cost of the building was kept low because men and women of the parish volunteered their help with the painting, shingling, and tiling the ceiling.

Over the years, there have been many changes made to the church and parish hall. Following the Second Vatican Council, interior changes were made in the current St. Gertrude Church so that liturgical guidelines would be followed.  Those changes were made in 1972 for the 100th anniversary. Bishop O’Connor offered a Mass at the parish in honor of the occasion.

Tradition is important to the parishioners in Grantfork. The annual chicken dinner held on the first Sunday of June began in 1969 and was held through 2019 until being cancelled due to COVID restrictions. It will return this year as a drive-through only event and will hopefully eventually return to its earlier form in the future.

Father Paul Bonk, the current pastor, was appointed pastor of St. Gertrude Parish in 2018.  This appointment also included St. Nicholas in Pocahontas and Immaculate Conception in Pierron.  The current congregation of St. Gertrude consists of 94 families who make up the active and ambitious parish.  Quarterly meetings are held by the Parish Pastoral Council and Finance Committee and the Altar Society meets various times throughout the year.  The Parish School of Religion (PSR) classes are now coordinated by a lay coordinator who is backed up by the parishioners.

Father Jakel says the pastor at St. Gertrude during his teenage years, Father Henry Schmidt, was a profound influence on his personal vocation. “I always wanted to be a carpenter, get married and have children; however, over the years, Father Schmidt would say to me, ‘Pat, God is calling you, but you’re not listening.’ … It was at the end of that summer (after high school graduation) that I finally answered God’s call,” he said. “Due to the great support of Father Schmidt pulling strings, within two days I entered our Diocesan Seminary of the Immaculate Conception on Lake Springfield.

“Now after almost 37 years of priesthood, 34 of them as a pastor, I reflect back on the people who influenced me. First was my parents and family, then my parish priests, my friends, and lastly, but not least, my parish family of St. Gertrude, Grantfork. I started to list the families at St. Gertrude who were my influencers, but the list became too long.”

Father Bonk has had various committees formed and several events have been planned for throughout the anniversary year.  On Sunday, Feb. 27, a kick-off Mass was held at St. Gertrude. St. Gertrude parishioners will also be taking part in the annual Grantfork Homecoming which takes place in August.  On Sept.  18, there will be a 10 a.m. joint church service with the Grantfork United Church of Christ, which is also celebrating their 150th anniversary.  The service will be followed by a pot-luck lunch.  The Feast Day of St. Gertrude is Nov. 16, and on Sunday, Nov. 13, at the 8 a.m. Mass, St. Gertrude will celebrate their closing Mass of their 150th anniversary year.

Lawrence Schwarz, one of the three current lifetime members of St. Gertrude Parish, is compiling information for a book which will cover the history of the past 150 years.

Father Bonk says he feels very honored to be the current pastor at St. Gertrude and to be able to participate in the events planned for the special celebrations of the 150th anniversary year.

St. Gertrude Parish in Grantfork is celebrating 150 years as a parish this year. Bishop Paprocki will be celebrating a Mass there on May 15.