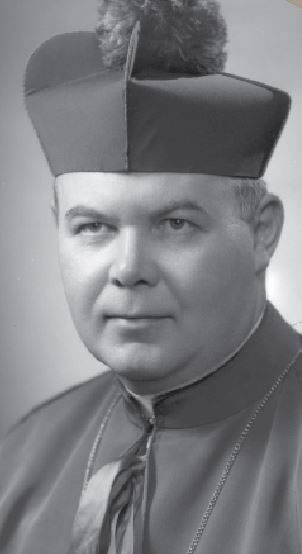 The following is an undated homily given by Bishop William O’Conner, who served our diocese from 1949-1975. This was provided to Catholic Times by the Office for Archives and Record Management for the Diocese of Springfield in Illinois.

Tonight, my dear friends, when darkness shall have once again triumphantly descended, routing the light of the day and claiming the city as his own, to reign unchallenged through the silent hours while the tired city sleeps, a taint red glow will faith­ fully and valiantly defend the altar of this church against the night-long siege of the surrounding shadows. Tonight, in all the Catholic churches of the city, in all the Catholic churches of the land, other vigilant sentinels will keep the altar bright, though the rest of the church be enveloped in impenetrable darkness. Why is this unusual custom so universally observed? Why has each church such a luminous sentry ever on guard; as a guard of honor, it would seem, tor it is evidently a futile protector? And why is this tiny flame so distinctive of our churches? For each of us would know with satisfying certainty that he was in a Catholic church, were he to see scarcely anything else but this little red flame on guard before the altar. And why is it that at night this tiny light should help to produce in men the same feeling of reverence and awe which the characteristic holy stillness of a Catholic church brings during the day?

These are questions which any observant non-Catholic might ask. He would naturally say to him­ self that this unusual custom must have a meaning, that this strange impression of his in Catholic churches must be due to some definite and constant cause. Surely every Catholic could answer these questions. He need but state this one basic truth, that a Catholic church is in a true and most wondrous sense the house of God. Yet how strange to his own ears may sound these words that express the truth to which he has assented all his lite. Perhaps only then will the vivid realization of just what this tremendous truth means and implies flash across his mind and hold him entranced and fearful. He is asked to explain why the light of the sanctuary lamp is never extinguished. He is asked to explain the strange impression of vitality and of awe that a non-Catholic feels when he enters a Catholic church. He answers, but his answer cannot but provoke the curious interest of the inquirer. The resultant questions and answers must force upon the Catholic himself the realization of the practical meaning of this wondrous fact. He answers, "The light of this lamp burns night and day, because it signifies that God is really present in this church." Then the flow of question and answer begins, "Is not God present everywhere?"

"Yes, but on our altars, God is present in a different manner. Jesus Christ, the God-man, now gloriously reigning in Heaven, is really, actually, physically present in this church, as truly as when in Galilee he went about among men, doing good."

"But where on that altar is the God-Man, Jesus Christ?"

"He is in the tabernacle, behind that bright metal door."

"But how can anyone believe that a man could get into a small chamber such as that?

"Our Lord is there present under the appearance of bread."

"How is that possible?"

"By the power of the words which the priest says over the bread, the substance of bread ceases to exist, although the appearances of the bread remain, and Our Lord becomes present under those appearances.

"Who gave the priests this power to bring God from Heaven to earth?"

"Christ Himself, and He not only gave them this power, but He commanded them to use it."

"Is that why this light is always burning?"

"Yes. When a Catholic sees this light, he knows that Christ is present on the altar. He genuflects to adore Him."

"Is it in this that Catholic churches differ so much from other churches?"

“Yes, that is the reason of that curious double impression of a real though mysterious presence and of reverence."

"Can the Catholic Church prove her teaching about Christ's real presence?"

"Yes, the Church proves her teaching by the testimony of Infallible Truth, Christ Himself.”

You see my dear friends, how quickly our habitual belief in Christ's real presence in the Blessed Sacrament can be sharpened into a practical, conscious realization of its actual significance, now, at this moment, in this very church. The questions of a non-Catholic force us to bring our minds to think of this truth of our faith, force us to understand clearly what we believe in order to explain such Catholic customs as genuflecting and the sanctuary lamp. It is at such times of clear advertence that we rebuke ourselves for growing accustomed to the presence of Our Lord, so accustomed that we are scarcely conscious of what we mean when we genuflect, so accustomed that entering the church no longer means coming into the house of God, into the dwelling-place and audience chamber of Our Lord Jesus Christ. But we must not be discouraged.

Our Lord does not demand this actual and clear realization at all times. He knows how prone to habit is our human nature and how inclined to became absorbed in tangible, material realities. But surely, we owe at least an occasional reflection to Him Who gives Himself as our spiritual food, Who stays with us here on earth that we may never feel God is far away and does not think of us. Nor need we wait until the questions of some inquirer force on us such reflection on the reality of Christ's presence. Sunday Mass, Benediction, any service of unusual meaning and interest, such as the sight of children making their First Communion, or a newly ordained priest celebrating his first Mass, should serve to bring home to us anew the tremendous truth that our God is not far from us, that He has in a most marvelous manner taken up His abode with the children of men.

But, my dear friends, this realization of Christ's real presence, even with its consequent renewed fervor of love and devotion, is not all that we owe to Our Lord in the Blessed Sacrament. Our duty is only partially fulfilled when we have made this effort to pay Our Lord the conscious homage of our mind and heart. It is equally our duty to know the reason why we can and must, as reasonable men, believe in Christ's presence in the Blessed Sacrament. For the proof of this doctrine is as strong and solid and satisfying to the reason as her doctrine itself is satisfying to the religious yearnings of the heart. Christ's infallible Church has defined as a truth to be believed by all Catholics, that Christ is present in the Blessed Sacrament truly, really, and substantially. For the Catholic, that is enough; that is the best possible proof. But we must not forget that there are other solid and certain proofs of this doctrine whose force even they must admit who do not acknowledge the claim of the Catholic Church to divine institution and to infallibility in matters of faith. It is this rational justification for his faith in the Blessed Sacrament that a Catholic should be prepared to explain to seekers after the truth. Does he not owe it to our Lord to wish to make known this greatest gift and expression of His love and of His generosity?

"And whilst they were at supper, Jesus took break and blessed, and broke and gave to His disciples and said, ‘Take ye and eat. This is My Body.’ And taking the chalice, He gave thanks, and gave to them, saying, ‘Drink ye all of this. For This is My Blood of the New Testament, which shall be shed for many unto remission of sins’” (Matt. XXVI,26-28).

In these words from St. Matthew's gospel, the Church finds a clear proof of Christ's real presence. This same solemn institution of the Holy Eucharist is narrated by St. Luke and St. Mark likewise. St. John provides an independent and equally strong argument when he tells at great length in the sixth chapter of his gospel, how Our Lord foretold and promised to give Himself as the "Bread of Life" about a year before His passion.

Other strong proofs of the teaching of the Church are to be found in Holy Scripture, to say nothing of the argument from the clear and unanimous testimony of the Fathers of the Church, who witness the unbroken tradition and faith of the ages. But we will center our attention on Christ's words as given to us by St. Matthew. Let us see how clearly they show that Our Lord really gave His Apostles His Body to eat and His Blood to drink.

On what occasion were these words, "This is my Body, This is My Blood," uttered by Our Lord? They were spoken the last night of Our Lord's life on earth, only a few hours before He was captured by the Jews. Surely then if Our Lord wished to deliver an important message to His Apostles, a message He wished them to remember throughout their lives and to teach all men, He would use the simplest and the clearest possible language. Any other style of speech might be misunderstood; only plain speech would be understood clearly. In these solemn moments, then, Our Lord takes bread and says, "This is My Body." He could not mean these words to be understood in any other than their natural and obvious sense. For He knew the implicit faith and trust of His Apostles in Him; they would most readily believe His every word. He knew that they were not highly educated scholars, but humble, unlettered fishermen, who were not inclined to look for any hidden meaning in such plain speech. Further, He foresaw that they would understand Him literally; that they would believe that they were to eat not bread, but His very Body and that, fulfilling His command to do themselves in commemoration of Him exactly what they had seen Him do, they would teach this literal meaning of His words to all men. Now, if Christ did not mean just what His words clearly signify, He would have had to correct His apostles then and there. He, the God of Truth, could not allow or permit His Church to err in such a matter. But does He correct the Apostle's interpretation?

No, He rather insists the more that He means exactly what they understand. For He takes the chalice of wine and says, "This is My Blood, which is shed. Drink it." It is impossible that the apostles would have understood these words in any sense but their natural sense. It is equally impossible for our Lord to have expressed more simply or more clearly His real presence in the Blessed Sacrament.

These are the points to be remembered clearly. Just as we know Jesus Christ is God, because He said that He was God, and proved it by His miracles, so we believe that this same Jesus Christ, true God and true Man, is present under the appearances of bread in the Blessed Sacrament, because He said so. Who can say that we have not true proof for this marvelous doctrine when we have the words of Jesus Christ Himself?

This then should be our resolution. To reawaken our realization of what Our Lord’s presence among us means and to renew our intellectual grasp of the reasons for our faith in this mystery. Then, by our living faith and fervent devotion, shall we give Our Lord the perfect service of our minds and hearts, and, perhaps, bring to His love, new souls for which He hungers.