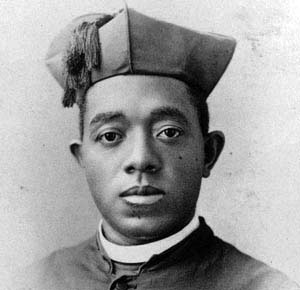 QUINCY — Area Catholics and others devoted to the Venerable Servant of God Father Augustine Tolton who grew up in Quincy, ministered in Quincy, and is buried in Quincy, will commemorate the 125th anniversary of his death with a pilgrimage procession on Saturday, July 9 in Quincy. Father Tolton is recognized as the first black priest in the United States and the Cause for his beatification and canonization of sainthood is ongoing in Rome.

The mile-long pilgrimage procession will begin at 10 a.m. at the statue of Father Tolton outside St. Peter Catholic Church at 2600 Maine St. After a few words of welcome and explanation, followed by a prayer, the pilgrimage procession will process along the south side of Maine Street where it will cross onto the east side of South 33rd Street. It will then process along the east side of South 33rd Street until it reaches St. Peter Catholic Cemetery where Father Tolton is buried.

Upon entering the cemetery, the procession will stop at the grave of Father Tolton for the celebration of Holy Mass at 11 a.m., with Bishop Thomas John Paprocki, Bishop of the Diocese of Springfield in Illinois, as the celebrant.

Following Mass, the pilgrims will pray for an end to hatred and violence, greater respect for life, and for more priests through Father Tolton’s intercession, as well as for Father Tolton’s canonization as a saint. The pilgrimage procession will conclude with the singing of Holy God, We Praise Thy Name, Father Tolton’s favorite hymn.

Father Tolton was born into slavery in 1854. In 1862, his mother and siblings made a daring escape across the Mississippi River to Illinois. After settling in Quincy, he went to school at St. Peter’s Catholic School. Tolton later went to seminary in Rome because no American seminary would accept a black man. Thinking he would minister in Africa, once he was ordained, he was instead sent back to Quincy, where he arrived to thousands of supporters. Known for his incredible singing and homilies, Tolton spent several years in Quincy before transferring to Chicago. He died of heatstroke at the age of 43 on July 9, 1897 and is buried at St. Peter Cemetery in Quincy. Pope Francis declared him “Venerable” on June 12, 2019, the second step of four to becoming a saint in the Catholic Church.