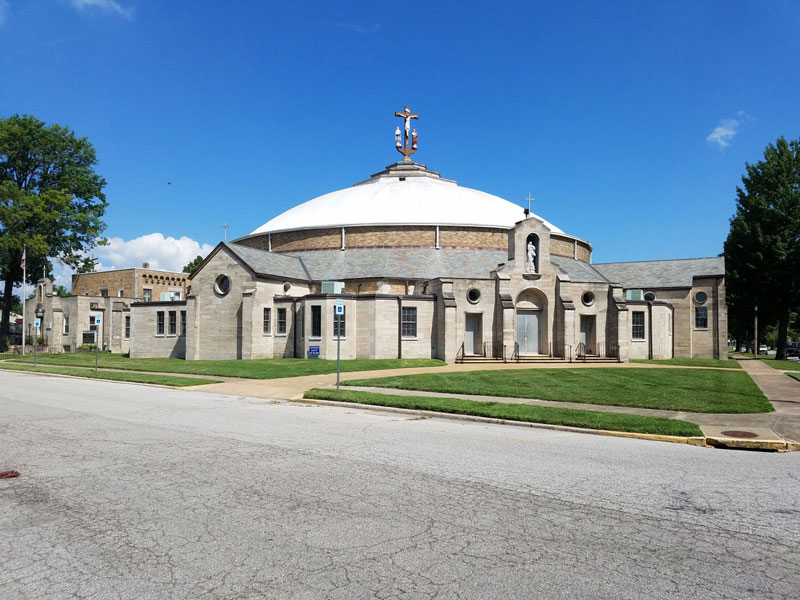 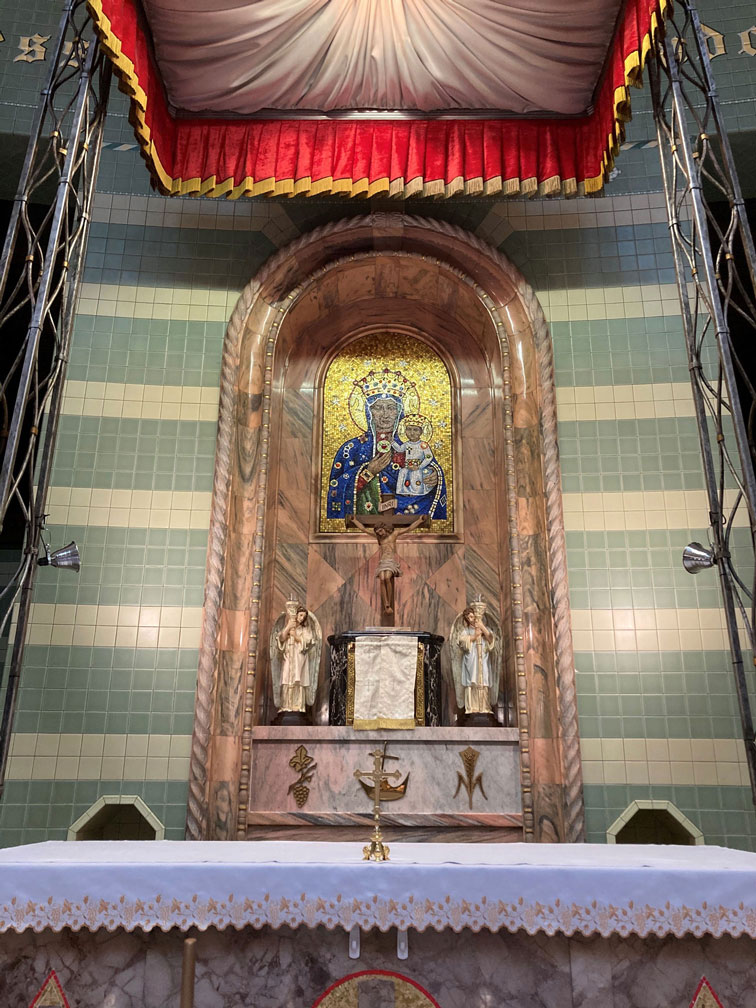 The honor of being one of the most unique churches in the Diocese of Springfield in Illinois belongs to St. Mary Church in Madison, mainly because of its domed structure. People who visit here say it reminds them of the Pantheon in Rome because that historic church is known for its dome. The dome at St. Mary spans 93 feet in diameter, much larger than what appears on the outside.

“Being where the location was picked to build the church, because of the location itself and the property, it fit better to have a dome rather than a traditional rectangle or square building,” said Father Stephen Thompson, pastor.

Completed in 1954, the church is dedicated to the Blessed Virgin Mary, the Mother of God, under the intercession of Our Lady of Czenstochowa. Beyond the rarity of having a dome, the church has other beauty not found in many churches. The church has three side chapels: the Chapel of the Sacred Heart, the Chapel of the Blessed Virgin Mary, and the Chapel of St. Joseph. Suspended over the altar is a baldachin or canopy on great iron bents tipped with gold and aluminum. Situated under that is a valuable mosaic of our Lady of Czenstochowa, a gift of a parishioner. The walls of the church are covered in glaze tile to prevent maintenance of a plaster interior. The Stations of the Cross are mosaic, designed by a French artist and various statues of saints can be seen throughout the church, surrounding the faithful attending Mass. The interior of the church is lighted mostly be a 25-foot diameter skylight, sitting 45 feet above the floor. 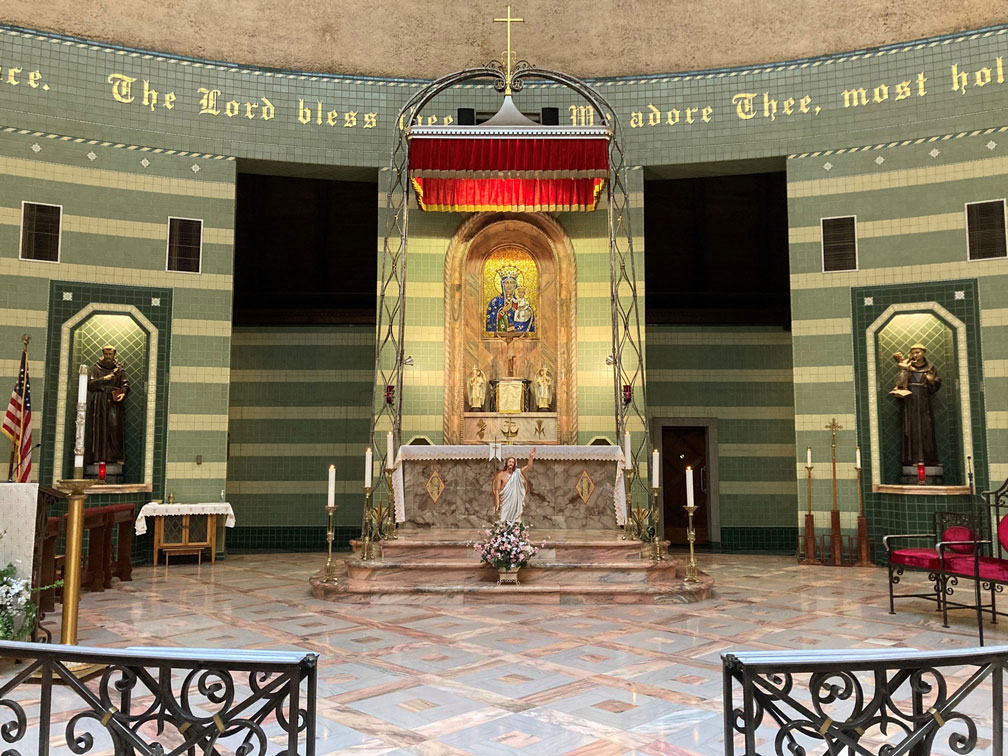 “The first thing that strikes me when I walk in is the focus on the altar,” said Father Thompson. “The statues and the chapels that we have, it just has that old feel and Franciscan feel. You feel the Franciscan mark on this church, which they had a lot of influence here.” 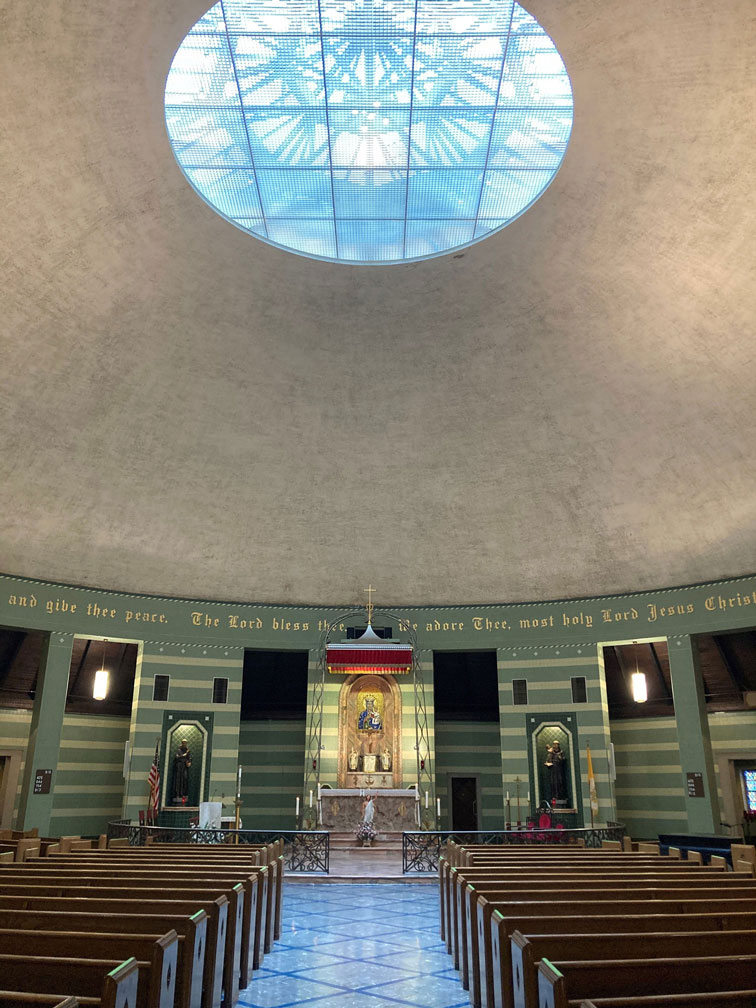 The first Catholic church built in Madison opened to the faithful in 1912. In 1925, St. Mary School opened with an enrollment of 265 students. The Franciscan influence Father Thompson talks about began in 1936 when the Franciscan Fathers of the Sacred Heart Province assumed charge of the parish, led by Father Engelbert Bienek, OFM. He had such a profound impact on the parish and its growth, his image can be found in the back of the church today. In 1952, plans began for erecting the new church. On Thanksgiving Day in 1954, St. Mary Church opened to the faithful.

“In the design of the church, the whole focus was to be on the altar, so even though you have the circular building, if you notice how the pews are facing, it’s all focused on the altar,” Father Thompson said.

The history of this parish has a heavy influence from Eastern Europe, with many of the parishioners having family histories that come from places like Croatia, Serbia, and Poland. Father Thompson describes the people here as “very warm and very welcoming.”

“I think part of that is the immigration of people here of them trying to find a home themselves, so making this a home for others,” Father Thompson said.