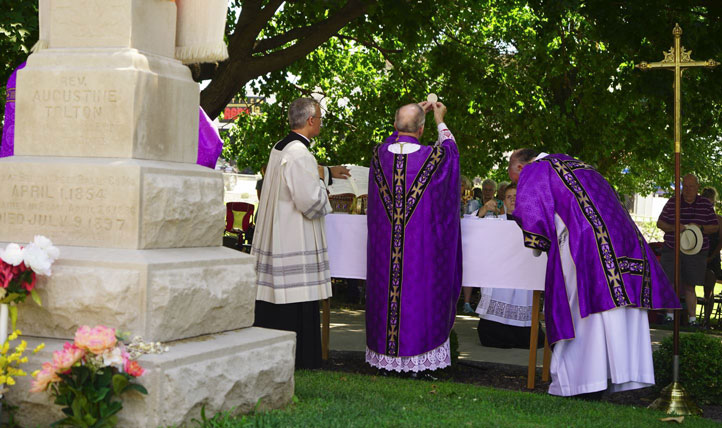 Photo by Jay Niles, The Catholic MissourianQUINCY – About 150 Catholics devoted to the Venerable Servant of God Father Augustine Tolton who grew up in Quincy, ministered in there, and is buried in there, commemorated the 125th anniversary of his death with a pilgrimage procession on Saturday, July 9 in Quincy. Father Tolton is recognized as the first black priest in the United States and the Cause for his beatification and canonization of sainthood is ongoing in Rome.

The pilgrims also prayed for an end to hatred and violence, greater respect for life, and for more priests through Father Tolton’s intercession, as well as for Father Tolton’s canonization as a saint. The pilgrimage procession concluded with the singing of “Holy God, We Praise Thy Name,” Father Tolton’s favorite hymn.

“When he left Quincy for Rome, Father Tolton promised not to forget the people of the Gem City, so we must not forget him either,” said Father Daren Zehnle, pastor of St. Augustin in Ashland and who organized the event. “It is fitting to remember him on the anniversary of his death to pray for his canonization, to ask his intercession, and to strive to emulate his virtues.” 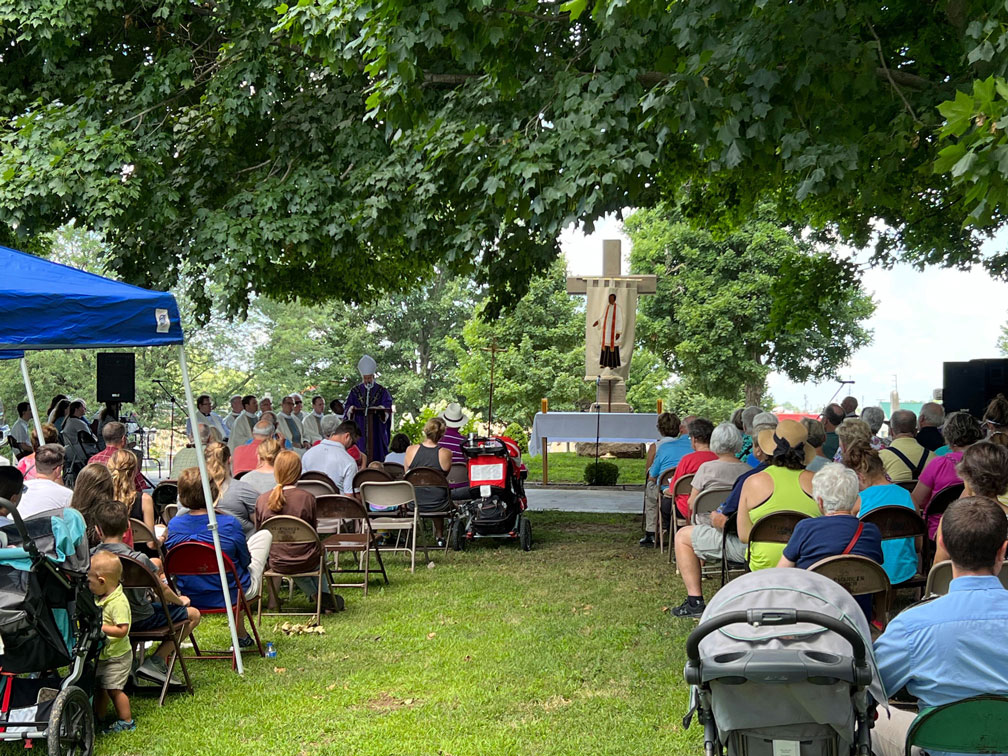 Photo by Scott Stadler“If we are to imitate the virtue of Father Tolton, we, too, must seek to be united to the sufferings of Christ throughout our lives so that we might also be glorified with him,” Bishop Paprocki said in his homily. “A most important way for us to be united to sufferings of Christ is to imitate the courageous patience of Father Tolton, especially in a society that is so quick to rage. There is unquestionably no shortage of occasions for each of us to practice this same virtue of courageous patience in our own lives. Opportunities for long-suffering abound in our families, in our places of employment, in our schools, and in society generally. What is needed for us is that we be stout-hearted and wait for the Lord, as Augustine did.”

Father Tolton was born into slavery in 1854. In 1862, his mother and siblings made a daring escape across the Mississippi River to Illinois. After settling in Quincy, he went to school at St. Peter’s Catholic School. Tolton later went to seminary in Rome because no American seminary would accept a black man. Thinking he would minister in Africa, once he was ordained, he was instead sent back to Quincy, where he arrived to thousands of supporters. Known for his incredible singing and homilies, Tolton spent several years in Quincy before transferring to Chicago. He died of heatstroke at the age of 43 on July 9, 1897 and is buried at St. Peter’s Cemetery in Quincy. Pope Francis declared him “Venerable” on June 12, 2019, the second step of four to becoming a saint in the Catholic Church.