Statewide grassroots effort calls for prayer, fasting on bread and water on Fridays for Illinois to become more pro-life

When the U.S. Supreme Court overturned Roe v. Wade in June, it was a monumental victory not only for the pro-life movement, but for babies in the womb and mothers across the country. At the same time, however, the decision meant Illinois would play an even larger role in the Midwest for abortion access.

In Illinois, abortion is a “fundamental right” under the law, there is taxpayer funding for abortion, minors can get an abortion without even notifying their parents, and abortion is legal throughout the nine months of pregnancy. Now, the spotlight is on Springfield, as Governor J.B. Pritzker and some legislators are wanting even more pro-abortion laws including, among other things, having non-doctors perform abortions, and passing these laws during a special legislative session.

On that note, enter a statewide grassroots effort to stop Illinois from becoming the Midwest’s abortion hub, organized by a group of women from the Diocese of Joliet.

“When the Supreme Court announced the reversal of Roe V. Wade, there was hope again,” said Sarah Turk of Joliet who is spearheading the effort. “We have a long way to go but we have hope! We realize the pressure on this state to become the Midwest abortion provider, and we must try to stop it. We also realize that this evil is so massive that only God can stop it. That is why this group of lay Catholics are making the effort to spread the prayer and fasting on Fridays message.”

Turk and several other lay Catholics have teamed up to contact all six dioceses in Illinois to spread the word as quickly as possible, asking Catholics, if they are able, to pray and fast every Friday on bread and water alone for the conversion of Illinois. They are hoping to reach 800 or more parishes in the state. Several parishes in the Diocese of Springfield in Illinois are participating by hanging posters and having prayer cards available for people to take home.

“Fasting strengthens and helps us to focus on prayer,” Turk said. “When we fast, we are saying we are serious that we need this evil (abortion) to be cast out. Fasting isn’t easy especially today when we have every kind of food and drink available to us 24/7. While it can be most powerful to fast only on bread and water, there are many ways to fast. It can be giving up a meal, sweets, alcohol, coffee, etc. You could also pray a rosary or go to Mass on Friday if this is something you would not normally do.”

The prayer card starts with a Scripture passage from Matthew 17:21, which says, “But this kind is not cast out but by prayer and fasting.”

Heavenly Father, You have given us great hope by gifting us with the reversal of Roe v. Wade. Bless the State of Illinois with good and holy leaders to guide and place us on the right path. We offer You our prayers and fasting in thanksgiving and for this intention.

“We are simply thanking God thereby acknowledging His part in this and petitioning Him, recognizing there is more to be done to satisfy His law,” Turk said. “We are extremely grateful to these brave justices and to all the individuals and organizations who have been in this fight to protect these precious lives. This battle is just short of 50 years — It needs to end!”

The call to prayer and fasting from this grassroots effort is also a good reminder for Catholics that every Friday (unless the Friday is a solemnity), Catholics must abstain from meat, even outside of Lent, unless some other form of penance or work of charity is done on that Friday (canon 1251). 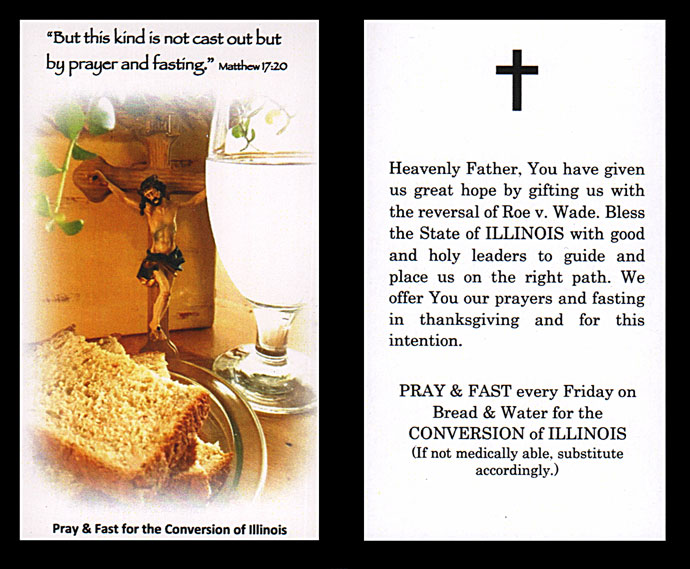