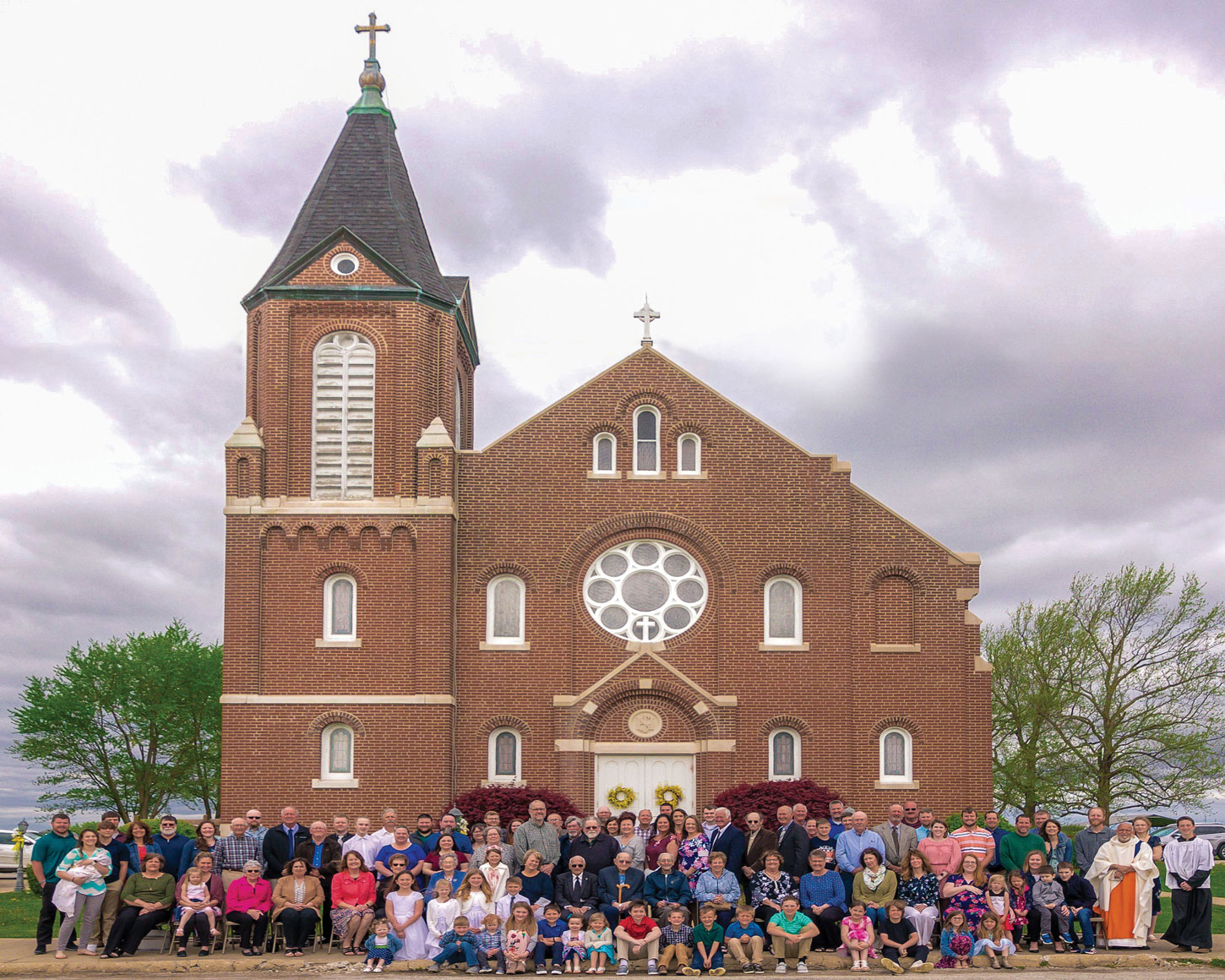 OCONEE — Sacred Heart of Jesus Catholic Church in Oconee is celebrating a special milestone in 2022— 150 years as a parish.

Most of the current parishioners are descendants of the pioneers who worked hard to establish and build the parish.  As German settlers began to open fields and farm the land around Oconee in the 1860s, they likewise started to search out any German-speaking priest who traveled through the area, to invite him to say Mass in various homes in the Oconee area.

In 1868, Gerhardt Herman Rakers Sr. and his family came to Oconee and Rakers was instrumental in finding a German-speaking priest.  Father Weis (stationed in Vandalia) would say Mass and distribute the sacraments when he could.  He urged the men to build a small but modest chapel. The congregation could gather there each Sunday to pray the rosary together and the children could be instructed by a layman. With a priest visiting on a regular basis, the congregation grew, and a wooden structure measuring 18 feet by 36 feet was built.  This church had no pews; the parishioners brought chairs or buckboard benches to sit on during Mass.

The church and parish were dedicated to the Sacred Heart of Jesus on May 9, 1872.  In June 1888, Bishop James Ryan came to Sacred Heart of Jesus and confirmed a class of 23 young people. By the 1890s the little church was outgrown and the plans for a 60 feet by 36 feet wooden structure with a 65-foot bell tower were planned.  The brick for the foundation was bought and hauled by the parishioners from north of Ramsey.  The cornerstone was laid in October 1891 and the new church was dedicated a year later.  In early 1900, the bishop offered to supply a resident priest if proper housing could be provided.  (Before the rectory could be built, the priest used the sacristy as an office, took meals, and roomed with the William Eckholt family.)

The first resident priest, Father Francis Harbe, arrived in 1903.  Work on the church was delayed due to lack of funds, but began again in 1904 after the rectory was complete.  In early 1909 lightning struck the church causing damage mostly to the front and vestibule. Labor and money were again invested in the church, from concrete floors in the basement to a heating system, an altar, the communion rail, and ceiling redecorating.

Sadly, In September 1911, at 1:30 one morning, the church spire was struck by lightning and the church and rectory burned to the ground.  When it was apparent that they would not be able to save the buildings, Father Pachlhofer and parishioners courageously saved the Blessed Sacrament and any items they could.  The parishioners worked diligently to clear the remains and begin again.  During the rebuilding process, the first church was used for services.  Father Pachlhofer stayed at the Turner house. 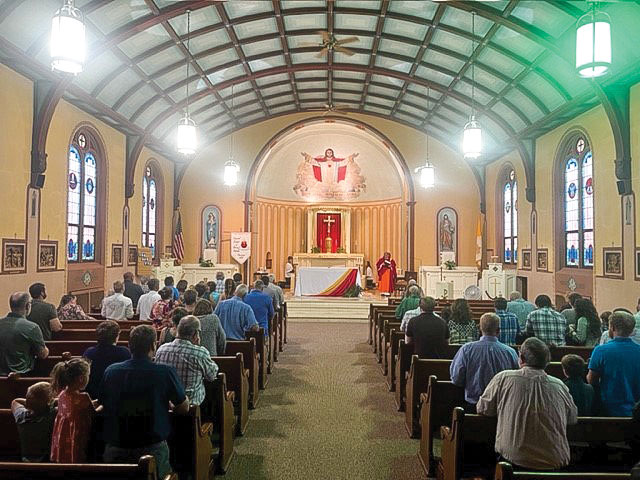 The loss of the church and rectory was only partially covered by insurance.  With parishioners, friends, and neighbors supplying labor, donations, and furnishings, the present church was a labor of faith and love.  The design is in the Roman style of architecture, constructed of steel skeleton with red brick foundation and lining.  The cornerstone for the current church was laid on Sept. 8, 1912. The first Sunday Mass was celebrated on Palm Sunday of 1913.

Many changes have taken place in the decor of the church but the steadfast devotion to the Sacred Heart and our Blessed Mother remains strong within the parishioners of today.  An outdoor eucharistic procession is observed each year on the feast day of the Sacred Heart of Jesus.  The annual May crowning of the Blessed Mother dates to 1915.  From 1922 to 1978, the parish provided a Catholic education for eight grades being instructed by the Ursulines of Decatur.

Fall is a busy time for the parish. For almost 90 years, it has been hosting an annual Trap Shoot on the first Sunday in November. Additionally, the popular Family Fall Festival is held the last Sunday of September and the first two Sundays of October.

Parishioners are grateful for each priest who has served the parish, especially the beloved current priest, Father Rodney Schwartz.  Sacred Heart Parish of Oconee is truly a family through our labors of love and dedication to our faith.

Zetta Wolf is the parish secretary for Sacred Heart Parish in Oconee.