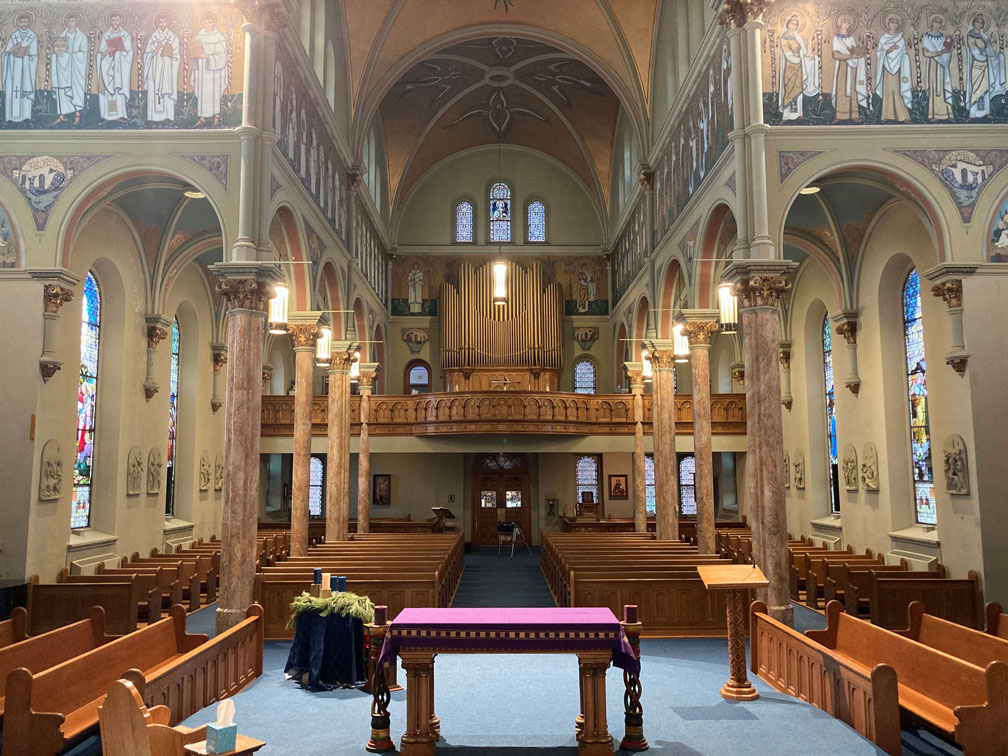 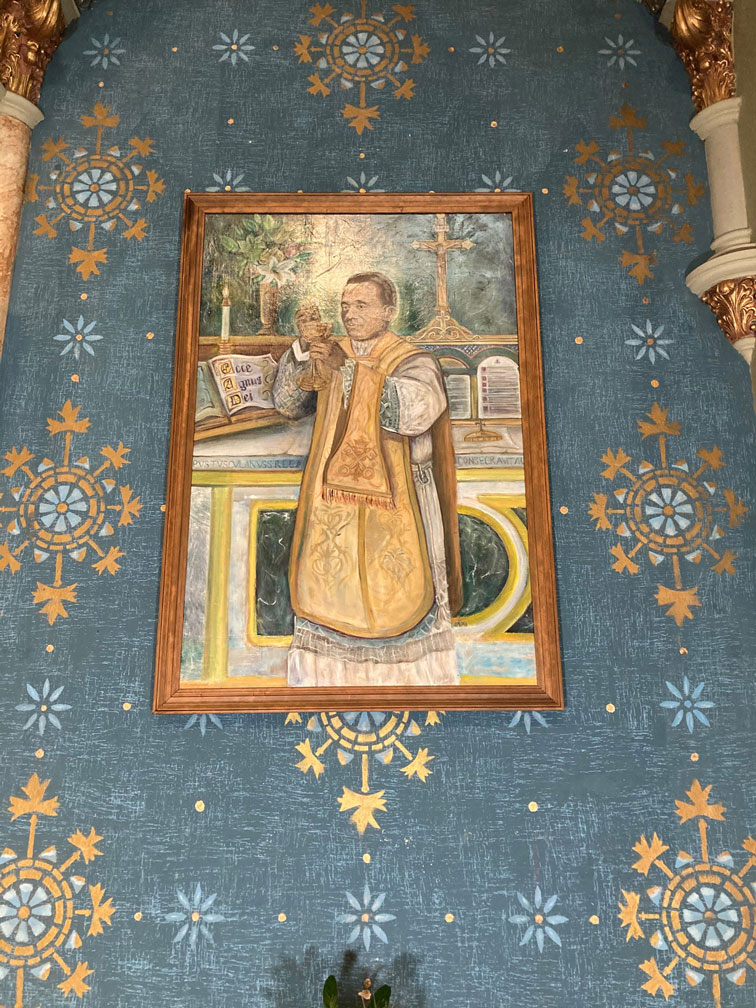 The St. Francis Solanus Chapel at Quincy University has been a gem in the “Gem City” for over a century, when Brother Anselm Wolff, OFM, designed the glorious church as a miniature of his masterpiece, St. Anthony of Padua Church in St. Louis. Today, the chapel, which is bigger than many parish churches in our diocese, continues to offer students at Quincy University a foretaste of Heaven during the Holy Sacrifice of the Mass as they are surrounded by dozens of images of saints, beautiful artwork, and the Eucharist.

Father Daren Zehnle, pastor of St. Augustine Parish in Ashland, grew up in Quincy and attended Quincy University and says he is “struck by the sheer beauty of the space.”

“It’s really a unique place in the diocese and probably in the country,” Father Zehnle said.

Stretching 123 feet in length, only the finest materials were used when the chapel was designed in 1910 and finished in 1912 including marble pillars, oak pews, and steel beams. The impressive stained-glass windows were created by a company in St. Louis and were imported from Germany.

The chapel has gone through many changes over the decades. Years of neglect during the Great Depression resulted in damage. In 1956, the chapel was redesigned using the Byzantine style, which portrays figures of Jesus, Mary, angels, and the saints in more of a heavenly theme. Father Tom Brown, OFM, one of the Franciscan Friars at the university, was the creator of the changes. 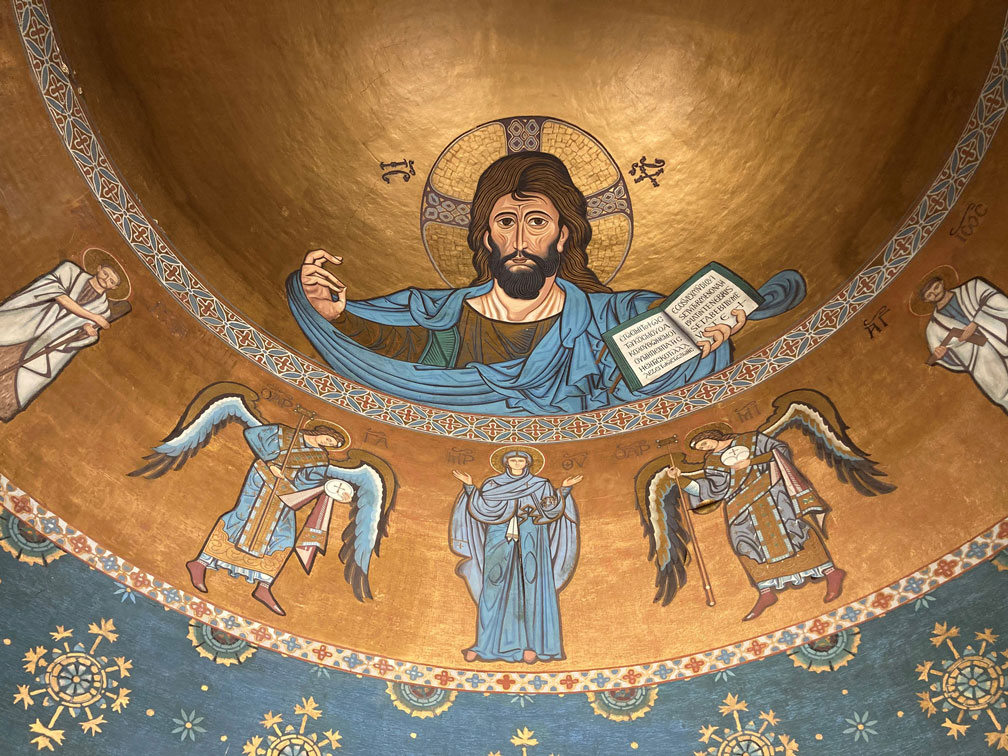 “He modeled it after the church of San Apollinare in Classe in Ravenna in the north of Italy,” Father Zehnle said. “When it was built there, it was the seat of the Roman empire, and the church still stands today. Over there, it was built in mosaic, but here he painted the various images on some sort of a canvas, and glued them up to the wall, but it’s a pretty faithful replication of what you see in Ravenna.”

One of the most decorative features of the chapel are the images of 70 saints that encircle the chapel. With male saints on one side and female saints on the other, each saint carries a symbol pertaining to their life.

“The depictions of them always serves as a great reminder that we are all processing with them toward Christ the Savior,” Father Zehnle said. “They also serve as a reminder to us that if they can live a holy life, if they can be saints, then each of us can as well.”

Another image that draws people’s attention is a copy of the famous the Good Shephard, a mosaic that is in the Mausoleum of Galla Placidia in Italy. The most striking piece of artwork, however, hits you right when you walk in — a 16-foot painting of Christ the Pantocrator, the title of Christ as ruler of the universe.

While Quincy’s Venerable Father Augustine Tolton, who escaped slavery to become the nation’s first black priest in Quincy never stepped foot inside this chapel, dying in 1897, he did attend Quincy University in 1878, which at that time was called St. Francis Solanus College. Today, Father Tolton is honored with a one-of-a-kind painting in the chapel. 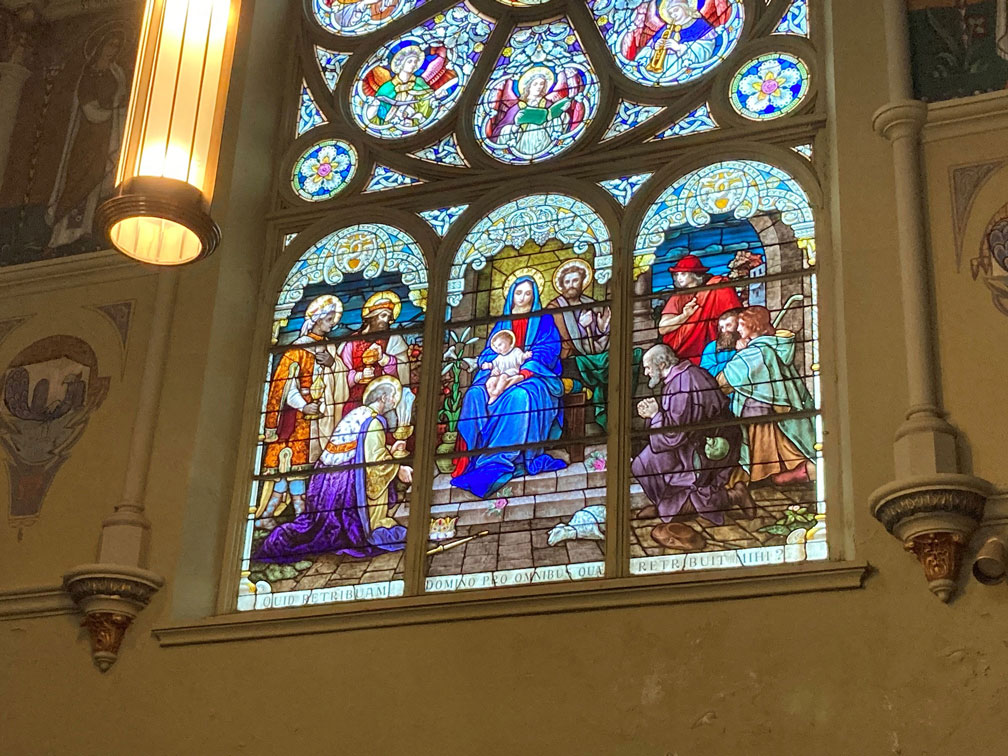 “It’s a newer addition to the chapel, just a few years ago, and it was painted by Isabelle Armengol Lewis,” Father Zehnle said. “It depicts Father Tolton’s first Mass which he celebrated at St. Peter’s Basilica in Rome. She didn’t intend for it to be housed at the QU Chapel, but it found its way here. It mixes really well with the colors already present which I think is a great sign of Providence. She painted it a few years ago, and I think it’s a great way to have a greater connection to Father Tolton who not only grew up in Quincy as a boy after he escaped slavery in Missouri but also attended Quincy University before going off to Rome to study in the seminary, and then he was sent back to Quincy by Rome to be a priest here. He stayed in Quincy for three years, and then he went up to Chicago for seven years before he died. Now, he is buried in Quincy.”

To think of the all the students who prayed inside these walls, 14 of whom became bishops throughout the United States and several others who are now serving as priests in our diocese, this chapel at the only Catholic University in our diocese, has played a major role in the history of our Church and in the faith life of countless of souls who came from different walks of life and different parts of the world.

“In that sense, this chapel serves in a real physical reminder of the universality of the Church that you wouldn’t most likely see in most parish churches in our diocese but because of the university involvement here, I think that all just sits right home,” Father Zehnle said.