By RYAN KEHOE and GRANT WILSON
Special to Catholic Times

There are dozens of objects used during Mass, seen on the walls of our churches, and found in the sanctuary. Whether it is the name of the object, the history, the symbolism behind why it is used, or how it came about, Catholic Times presents to you interesting facts about objects found in our churches that may make you say, “I didn’t know that!”

(Photos by Andrew Hansen taken at the Cathedral of the Immaculate Conception in Springfield.)

Sanctus bells — These are struck once at the epiclesis when the priest celebrant calls down the Holy Spirit over the bread and wine. The bells are then traditionally rung three times each when the priest celebrant shows the sacred Host and when he shows the chalice following the consecration. This ringing has been a tradition in Catholic churches for 800 years. The ringing of these bells is optional, but it helps signal to the faithful that the liturgy has reached its high point. 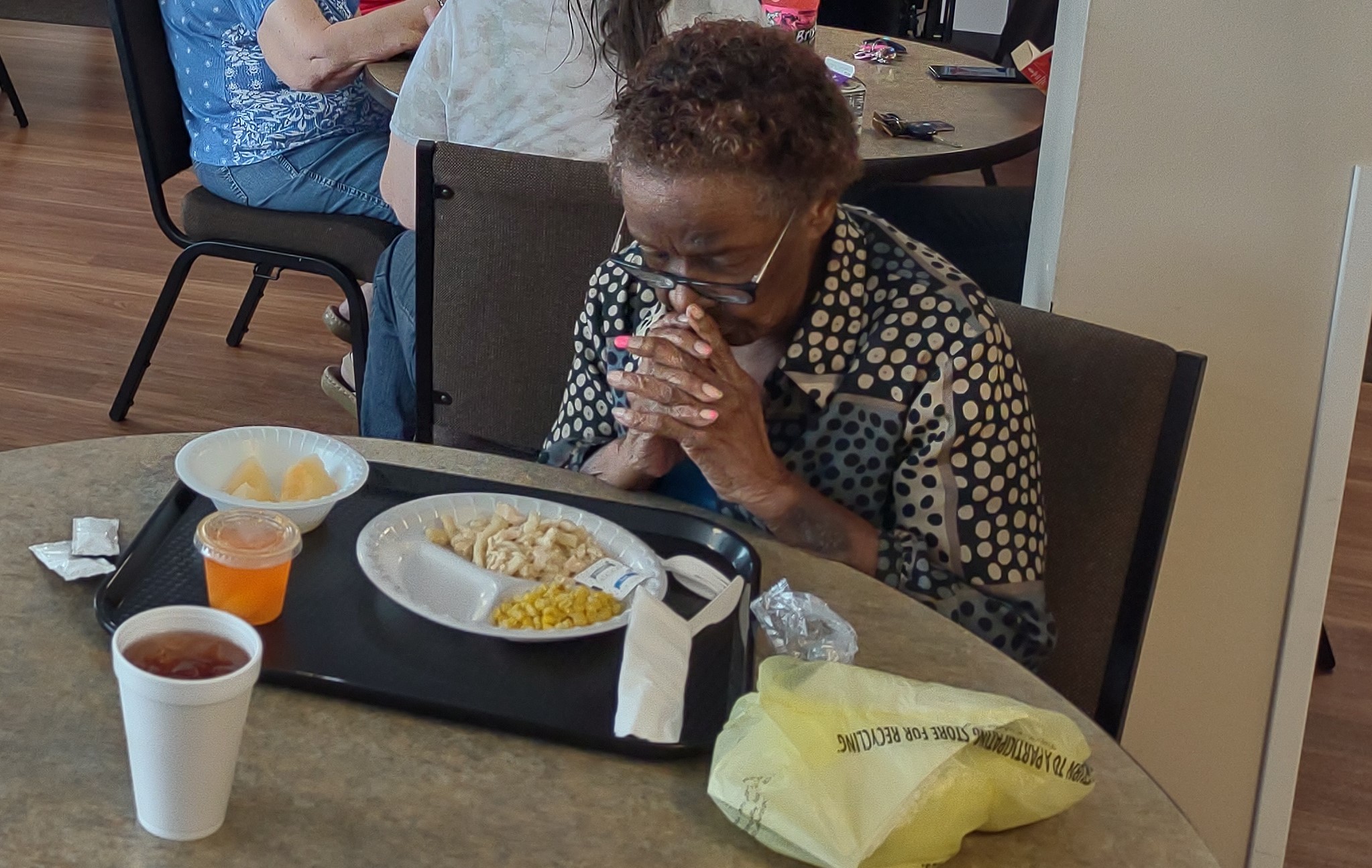 Icon — Traditionally associated with Eastern Christianity, an icon is a sacred image used in religious devotion. This icon was commissioned for the sesquicentennial celebration of the diocese and is entitled The Mother of God, the Life-Giving Spring. Mary is depicted holding Jesus, surrounded by angels and various holy men and women. On her left is the title "Mother of God" and on her right is the title "Life-Giving Spring." Icons are filled with rich symbolism, some of it clearly seen and some hidden. 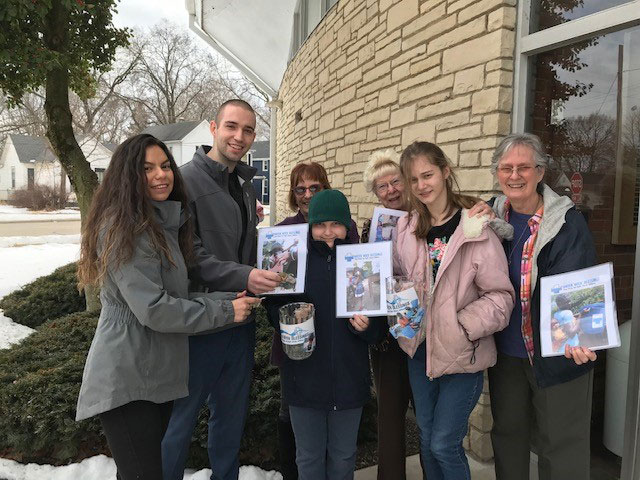 Paschal candle — This represents the risen Christ whose light has come into the world to scatter the darkness. Each parish purchases a new one each year, and a priest blesses it. It is used during the Easter season and other special occasions, like baptisms and funerals.

Each Paschal candle has a cross, the Greek letters “alpha” and “omega” to show that Jesus Christ is the beginning and end, the one who created everyone and everything; the current year, to show that God is with his people today; and five wax-covered incense grains that are inserted with nails into the candle to represent the five wounds of Jesus on the cross. 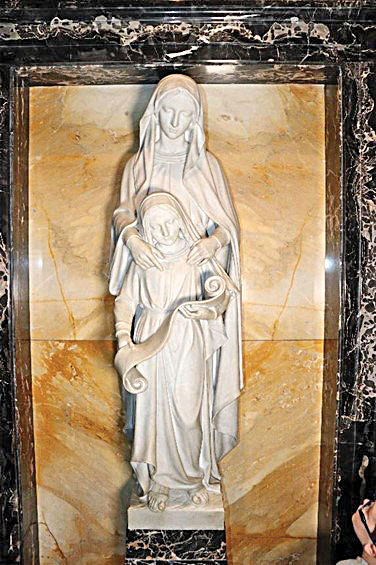 Statues —This is a statue of Mary and St. Ann, Mary’s mother. Catholics put statues of saints in churches, homes, and businesses because, just as we ask our friends and family to pray for us when we need help or support, we ask saints to pray for us. We use statues or images to remind us of their help and presence in our lives. Also, just as people display pictures of family and friends in their homes, Catholics display images of saints because they are our family and friends in Christ.

Stations of the Cross — This is a series of 14 images that depict scenes from the day of the Lord Jesus’ passion and death. Done especially during the season of Lent, but at any time of the year, Catholics pray and meditate on these events by processing or walking from image to image. This tradition originated in the Holy Land in the 1400s, where pilgrims followed a certain route and made stops at places where significant events in Jesus’ life happened all the while meditating and remembering his passion and death. 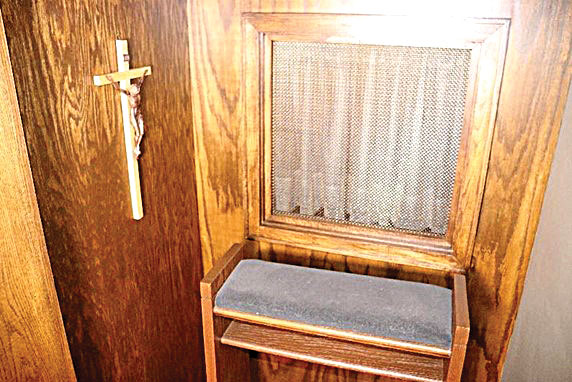 Confessional — Most churches have a small room or kneelers which are built to face each other but which are separated by a wall or other barrier called a “confessional.” This is where Catholics confess their sins to a priest, who acts in the person of Jesus Christ and forgives them. Catholics believe that Jesus delegated the authority to forgive sins to his Apostles, an event recorded in the Gospels of Matthew (16:18) and John (20:22). Jesus gave this authority to priests — to forgive the sins of those who come to confess.

The tradition of confessing sins is mentioned by early Christians, such as St. Irenaeus, who was taught by a disciple of St. John the Apostle; by Origen, a Christian writer from the 200s, and by St. Ambrose, the bishop of Milan, Italy from the 300s, who said that the right of hearing and forgiving sins “is given to priests only.” 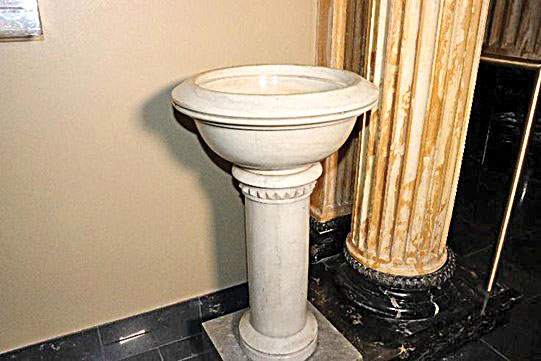 Holy water font — These are usually found near the entrances to a church and have holy water in them which is blessed water by a priest or deacon. When Catholics enter church, they dip their finger in the holy water and make the Sign of the Cross to remind them of their own baptism. Holy water is called a sacramental, a sacred object or action which signifies spiritual effects and helps people to receive the sacraments. 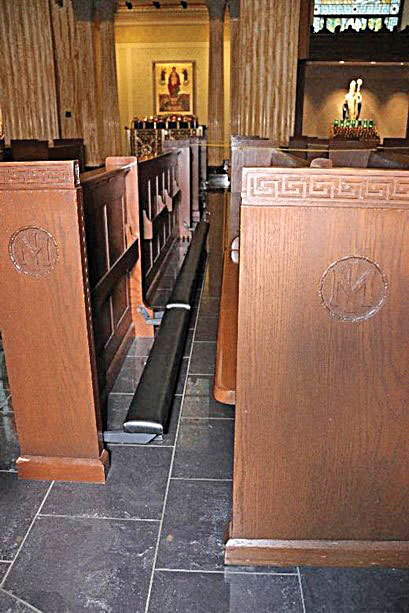 Pew and kneeler — Kneelers were not used in early Christian churches. They are a modern development and have only been a part of the Catholic Mass since the 1500s. During the Middle Ages, the Catholic Church encouraged people to use them during Mass to emphasize each person’s humble position before God. 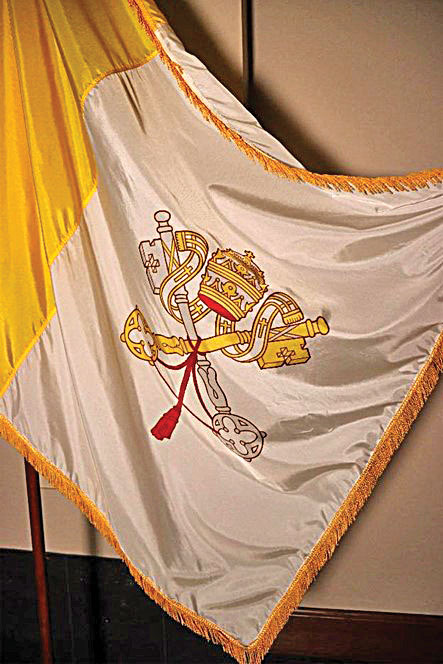 Papal flag — Pope Pius XI adopted the current Papal flag in 1929 when Vatican City became an independent state. It is modeled on the earlier flag used by the Papal States. The flag has the triple papal tiara, the pope’s crown, which symbolizes his authority. Below the crown, there are two keys, one silver and one gold. These represent the keys to the kingdom of Heaven which Jesus gave to Peter. The two different colored keys symbolize that Peter and his successors have both spiritual and worldly power. In many churches, the Papal flag and the national flag can be found. 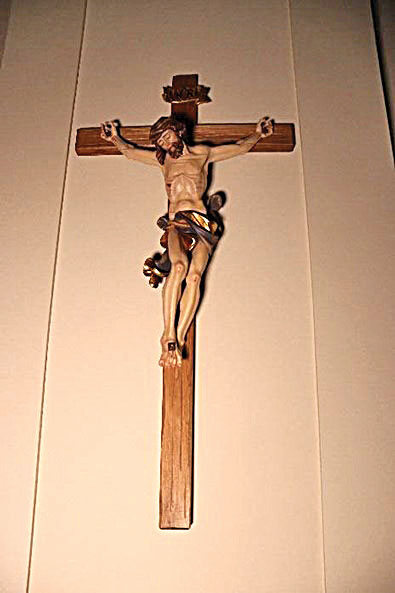 Crucifix — The image of Jesus nailed to the cross is called the “crucifix.” Catholic churches have used this image for over 1,000 years. It is used as a witness to Jesus Christ’s sacrifice and death and to honor what Paul said in his letter to the Corinthians: “We proclaim Christ crucified.” According to liturgical law, every church must have a crucifix on or near the altar.