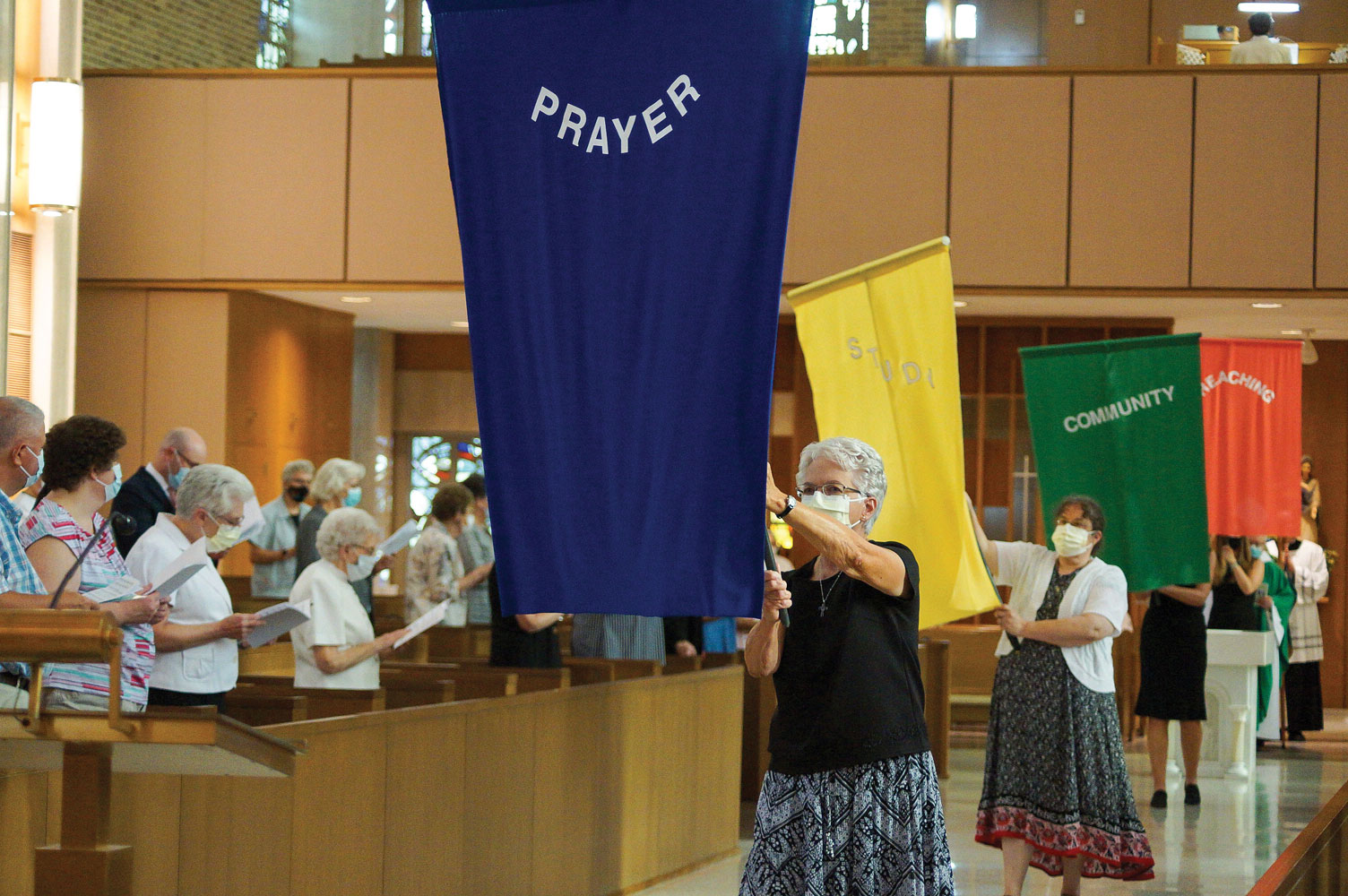 Sisters process through a congregation of Springfield Dominican Sisters and associates, nuns, and laity, carrying banners representing the four pillars of Dominican life: prayer, study, community, and preaching. A yearlong sesquicentennial celebration of the founding of the Dominican Sisters of Springfield began Aug. 19 with a Mass celebrated by Bishop Thomas John Paprocki from Sacred Heart Convent Chapel at their motherhouse. Over the next year, the community will host multiple prayerful and celebratory events, culminating in a public eucharistic celebration on Aug. 19, 2023, to mark the 150th anniversary of the arrival in Jacksonville of the pioneer sisters in 1873.

“Looking back over the span of our history is an exercise in gratitude, humility, and awe,” said Sister Rebecca Ann Gemma, OP, the prioress general of the congregation. “I am grateful to those six women who, with 48 hours’ notice, said ‘yes’ to a mission they could never had imagined. I am humbled by God’s continued fidelity. I stand in awe of the mission to which we are called for the life of the world.”

In the past, being in solidarity with the rostros concretos — as it is expressed in Spanish — meant building educational and healthcare institutions to serve a growing nation of immigrants. With the institution-building phase of the U.S. Catholic Church’s story now long past, an authentic response to the world’s needs looks different that it did in the 19th century.

In 2014, when he declared a year dedicated to consecrated life, Pope Francis told the Church’s religious women and men, sisters, brothers, and priests, to “Come out of yourselves and go forth to the existential peripheries.” He asked religious women and men to go to those who have lost all hope, feel abandoned, without purpose, and “thirsting for the divine.”

Since 1873, Dominican Sisters from the Springfield-based congregation have done just that at hundreds of ministry sites in 21 states and multiple locations in Peru.

“This time of prayerful contemplation on our history is as much about looking toward the future with hope as it is about reflecting back on a storied past,” Sister Rebecca Ann said. “As it was for our founding sisters 150 years ago, our mission of standing in solidarity with persons on the peripheries of our nation, church, and world is ongoing and responsive to the needs of the world today.” 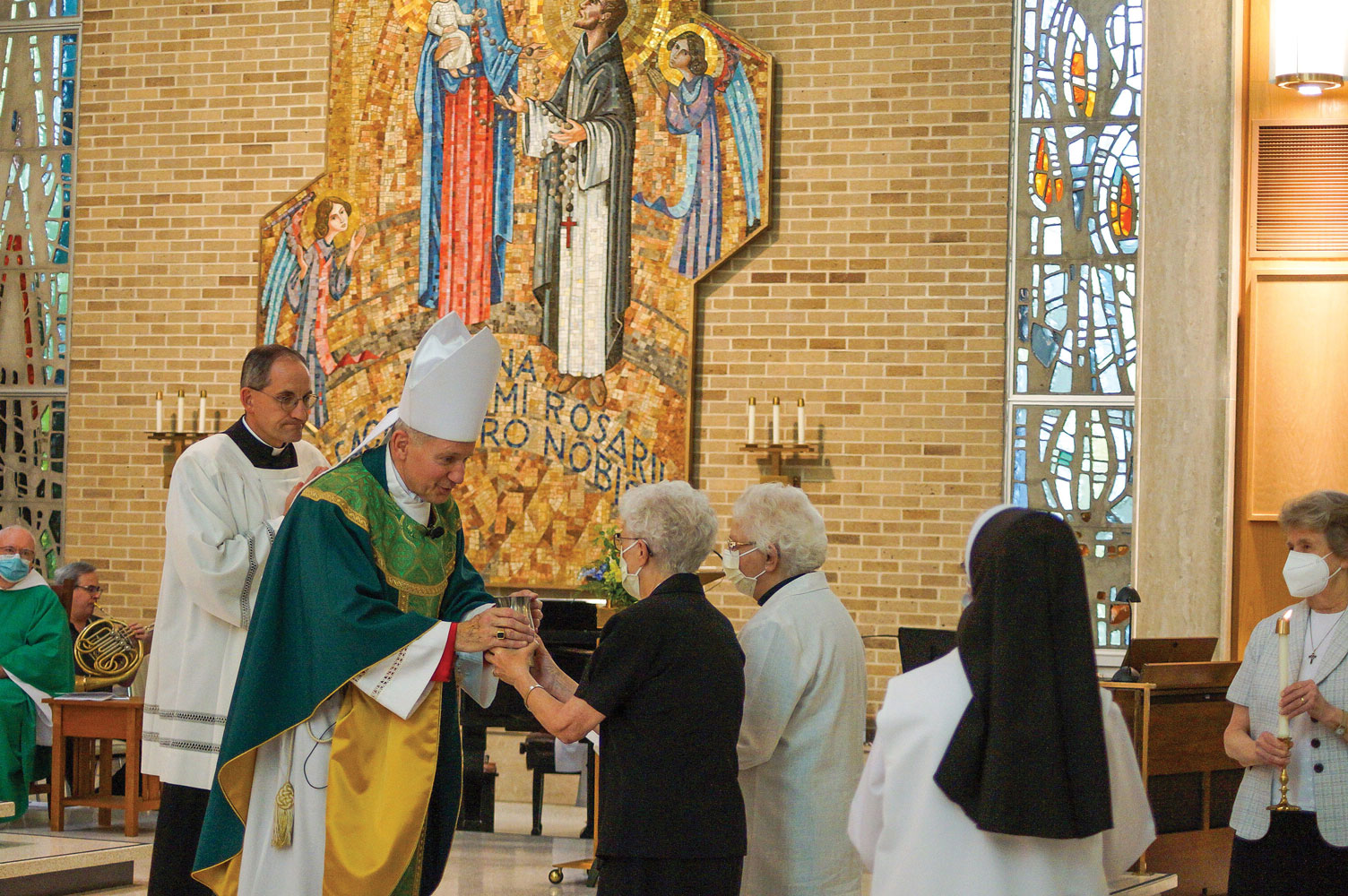 In addition, the educational mission begun by the founding sisters continues on through three sponsored high schools, two literacy centers, a program of formation of associate candidates, and in multiple other ways of educating, forming, and supporting the faith journeys of individuals, families, and parish communities.

Since 1999, when the sisters took responsibility for Jubilee Farm on Springfield’s western border, the congregation has grown increasingly active in educating and advocating for personal and policy changes that will mitigate the climate crisis and support a healthier planet. The sisters and their associates are active participants in the Vatican’s Laudato Si’ Action Platform.

In 2022 the sisters have been among several dozen communities of women religious to broaden the reach of the global synod of the Catholic Church, an ongoing process initiated by Pope Francis to transform the way the church approaches self-governance and its mission of evangelization.

“It would be impossible to try to enumerate the many places where the Dominican Sisters of Springfield have served over the years, but suffice it to say that thousands upon thousands of souls have been touched by your faithful witness to the Gospel, sharing the Good News of Jesus Christ by word and deed,” Bishop Paprocki said during his homily. “In a diocese with significant tracts of farmland, the image of sowing seeds is one that it is fitting, for through your service, you have sowed seeds in the soil of many souls, especially young people, seeds which, with God’s grace, have grown and borne fruit in ways that you will not fully appreciate this side of Heaven. For that reason alone, you can look to the past with great gratitude and joy, knowing that the Lord has used you as His instruments in helping to build up the Body of Christ in this section of His vineyard.”

Visit springfieldop.org/150years for more about the Springfield Dominican Sisters’ response to God’s call, their history, and all the events planned for the anniversary celebration throughout the year.