What’s in a church?
Objects you’ve seen before but didn’t know the name or rich history/symbolism behind them (part 2)

By RYAN KEHOE and GRANT WILSON
Special to Catholic Times

Photos by Andrew Hansen taken at the Cathedral of the Immaculate Conception in Springfield.

There are dozens of objects used during Mass, seen on the walls of our churches, and found in the sanctuary. Whether it is the name of the object, the history, the symbolism behind why it is used, or how it came about, Catholic Times presents to you interesting facts about objects found in our churches that may make you say, “I didn’t know that!” 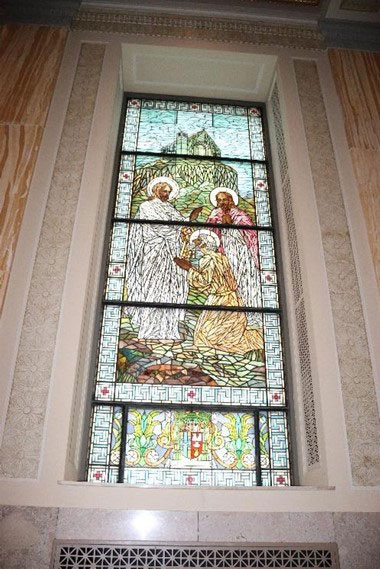 Stained glass windows — These often depict scenes from the Bible, the lives of saints, or some other aspect of salvation history. Primarily, there are three reasons we use this glass in churches. The first reason is functional. Windows allowed the church to be well lit in the ages before lightbulbs. Secondly, stained glass is helpful in catechesis. Before reading was common, depictions were an easy way to provide catechesis. Finally, these windows are meant to be beautiful additions to the space we worship in. The Temple of Jerusalem from the Old Testament was filled with beauty, and it drew the people of God to Him in wonder and awe. Like the Temple, our churches are to be filled with beauty and, in this case, the beauty of stained-glass windows is meant to inspire us and draw us deeper into the divine mysteries.

Sanctuary lamp — The Church teaches and believes that Jesus Christ is truly present Body, Blood, Soul, and Divinity in the Eucharist. In Catholic churches, Jesus is therefore present to us in the tabernacle for our prayer and adoration. The sanctuary lamp points to his true presence in the tabernacle. Historically, lamps were used to give light to help people find their way or to convey information by signaling to another person. The sanctuary lamp does the same for us. It is meant to signal to us that Jesus is present in the tabernacle, and He is the light that will guide our path to Heaven. This lamp also has connections to the Old Testament (Exodus 27:20-21) when God prescribed that a lamp burn visibly in the Temple to signify His presence. 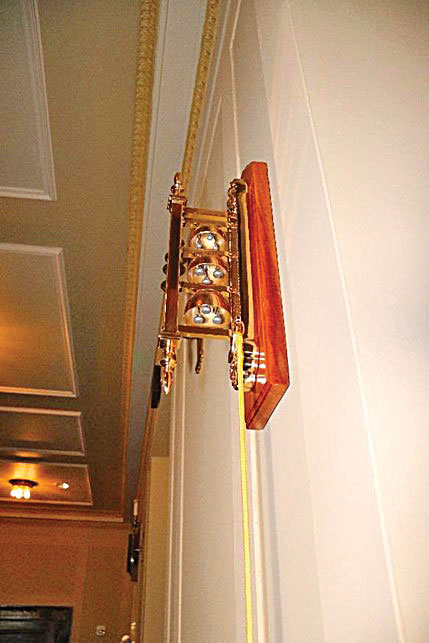 Bells — These bells found on some church walls are rung to signal to the congregation that Mass is starting. Bells have a long history in the Catholic Church. In monasteries and towns, large tower bells would be rung to announce the time for Mass. This was especially important since there were no watches or clocks to announce the time.

Baptismal font — Baptism is the first of three sacraments of initiation, through which men and women become incorporated into the mystical body of Christ. This sacrament comes directly from the commission of Jesus to the Apostles when He sent them out to the whole world to spread the good news of his saving love (see Mark 16:15-16, Acts 1:1-5, 8). Baptism is performed when water passes over the brow of a person’s head and the minister of the sacrament says the words “I baptize you, in the name of the Father, and of the Son, and of the Holy Spirit.” Once a person is baptized, he or she is a member of the Body of Christ (1 Corinthians 12:12-13), a child of God, and an heir to the Kingdom of Heaven (CCC 1213). From the earliest days of the Apostles, we hear that Christians were baptized by use of water (Acts 8:36, 1 Peter 3:20-21). Many fonts always have holy water in them which we use to bless ourselves by making the Sign of the Cross. When we do this, it should remind us that we are children of God and members of Christ’s Body who are called to become saints.

Ambo — During Mass, the readings from Sacred Scripture are done from the ambo. The word “ambo” comes from Greek meaning “high place.” At Mass, the readings, Psalms, and the Gospel are proclaimed from this small “mountain.” Matthew 5:1-2 tells us that Jesus went up the mountain and taught his Disciples from there. Likewise, Moses brought the Word of God to the people from Mount Sinai, and the priest then, like Jesus, teaches from the “mountain” through his homily. 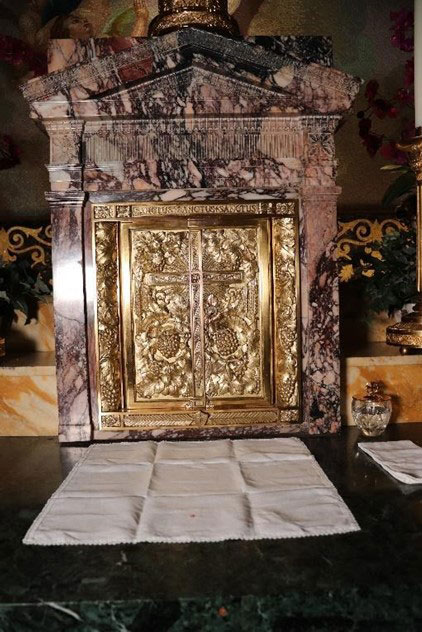 Tabernacle —The word “tabernacle” comes from the Latin word tabernaculum meaning “tent.” This is in reference to the meeting tent of the Old Testament where the Ark of the Covenant was kept, where Moses would speak with God (Exodus 33:7-9). In Exodus, we read that the meeting tent was in another area, away from the rest of the camp. Anyone who wished to speak with God would go near it and pray. Similarly, the tabernacle is where Jesus in the Blessed Sacrament and is kept for our prayer and adoration. This is why Catholics genuflect toward the tabernacle. The Blessed Sacrament is the Body, Blood, Soul, and Divinity of Jesus Christ and by genuflecting toward Him, we are showing reverence. Although the use of a tabernacle goes farther back, it was the Fourth Lateran Council in 1215 which required that the remaining Hosts from Mass be kept in a secure well fashioned receptacle. 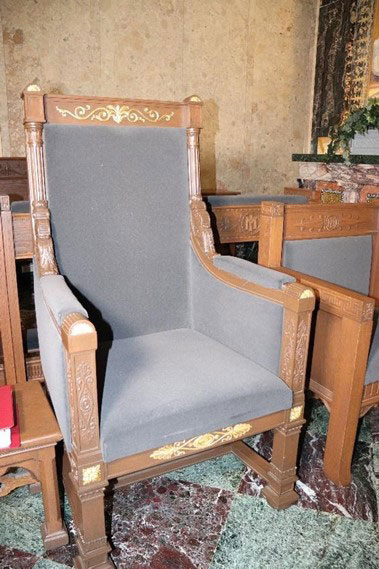 Presider’s chair — The presider’s chair is located in the sanctuary. It is from there that the priest begins and concludes Mass. It is separated from the rest of the community to show that the priest is the leader at the Mass because he stands in persona Christi capitas, in the person of Christ. The chair for the main celebrant of the Mass should be distinct from any others in the sanctuary, but not ostentatious or throne-like.

Altar — The altar is where the main action of the Mass happens during the Liturgy of the Eucharist. The Catholic Church has used altars to offer the Holy Sacrifice of the Mass since Apostolic times and their use demonstrates a continuity in our worship and in our understanding of sacrifice as stemming from worship in the temple.

Altars are to be consecrated since they are not normal tables but become the “Table of the Lord” as Paul says in 1 Corinthians 10:21. Some altars contain the relics of saints. When the first Christians worshipped in secret, the altars they used were the stone tombs of the martyrs. To this day, many churches continue to offer the Sacrifice of the Mass on top of the relics of those who have offered their lives to God to imitate the early Christians. 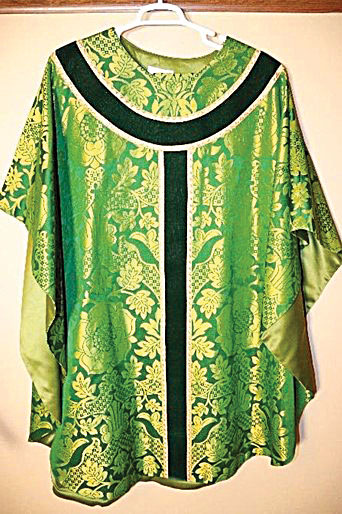 Chasuble — The chasuble is one example of vestments that are worn by ministers at Mass and the celebration of the sacraments. Each vestment at one time had a practical societal use but are now adopted by the use of the Church and given symbolic meanings. The chasuble worn by a priest or bishop at Mass is the outermost garment worn and is symbolic of charity which is put on over all other things. 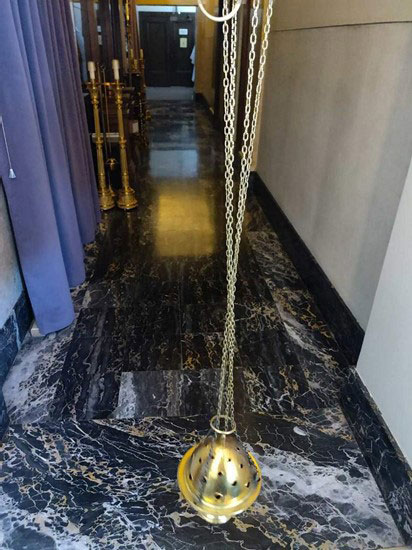 Thurible and incense boat — A thurible is a sturdy metal container on the end of a chain of which inside, are burning coals used to melt and burn the incense, creating smoke and a pleasant fragrance. The priest, deacon, or altar server will swing the thurible during certain parts of liturgies, such as before the reading of the Gospel or during the Consecration. The smoke symbolizes the prayers of the faithful being taken up into Heaven.

Incense adds an element of mystery to the Liturgy. For example, when the incense is burned, it fills the church with a smokey mist that hangs in the air. This is connected to the vision of Isaiah (Isaiah 6:1-4) in which he “saw the Lord sitting upon a throne” with angels in attendance filling the room with praise of Him and smoke. The whole scene described by the prophet is mysterious, and when incense is used in the Mass, we should recall this scene and the opening words of the priest at Mass where he calls the Mass “the Sacred Mysteries.”

Finally, incense has been used over the centuries as part of sacrifices and offerings. In Psalm 141:1-2, it says, “Lord, I call to you; hasten to me; listen to my plea when I call. Let my prayer be incense before you; my uplifted hands an evening offering.”