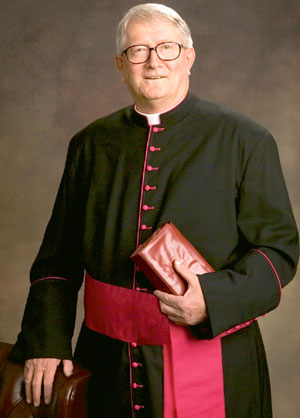 He was born Nov. 18, 1928, in Springfield, the son of the late Harry and Nina Carney Wright. He grew up in Blessed Sacrament Parish, attended the parish grade school, and Cathedral Catholic Boys High School, where he excelled in academics and athletics, lettering in all three major sports. He earned his bachelor's in philosophy from St. Ambrose College, in Davenport, Iowa, and did his theology studies at St. Mary of the Lake University, Mundelein Seminary. He was ordained May 29, 1954, by Bishop William A. O'Connor, at the Cathedral of the Immaculate Conception in Springfield.

His first assignment was as an assistant at St. Patrick Church in Alton for three years. While at Sacred Heart Parish, Granite City, the next year as an assistant, he completed his master's in education from St. Louis University.

He returned to Springfield in 1958 to serve as diocesan superintendent of Catholic schools for 11 years, while also serving as chaplain for the Ursuline Sisters at the Ursuline Academy convent and as a teacher at Springfield Junior College. He was pastor at St. Bernard Parish, Wood River from 1969 to 1979, when he was appointed pastor at St. Agnes. Back in Springfield, Father Wright immediately began the task of relocating the parish church, school and rectory from Capitol Street, adjacent to the Illinois State Capitol complex, to its present location on Amos Street. Under Father Wright's leadership, the parish built a new school, rectory and church. The new buildings were financed through several parish capitol building campaigns, first the school and rectory, and then the church, which was dedicated eight years after the school opened. All building loans were paid off by June of 1996.

He was dean of the Springfield deanery from 1995 to 2004. In 2002 he was awarded the honorary ecclesiastical title of  "Reverend Monsignor," and designated a "Chaplain to His Holiness" by Pope John Paul II.

A concelebrated funeral Mass was held at St. Agnes Church, Friday, Nov. 30, at 11 a.m., with Bishop George J. Lucas and priests of the Springfield diocese. Burial followed in Calvary Cemetery in Springfield.