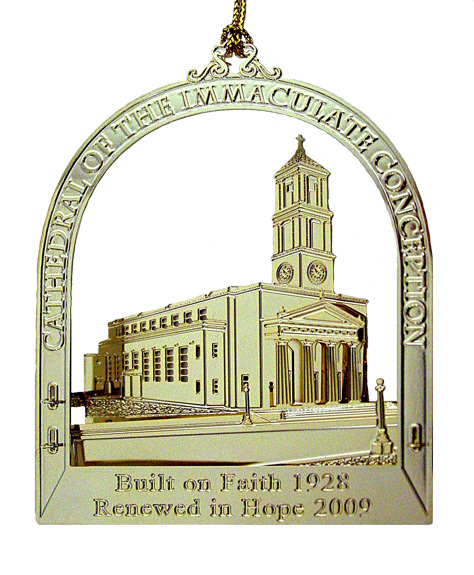 St. Joseph’s Home in Springfield has released the Official City of Springfield Ornament for 2009. The newest ornament features The Cathedral of the Immaculate Conception with the words: Built on Faith 1928, Renewed in Hope 2009. It is the 17th in a series of ornaments that honor Springfield’s landmarks and are issued annually by St. Joseph’s Home. The ornament is a fund-raiser for the home for the aged.

This year’s ornament is based on a photograph taken by Catholic Times reporter Cathy Locher. “The ornament depicts the Cathedral as it appeared before the restoration began,” said Terri Hempstead, director of development for St. Joseph’s Home.

“There are people who have collected the ornaments since the very beginning and have every one,” said Hempstead. “This is the first church we’ve featured.

“However, this ornament is particularly close to our heart at St. Joseph’s because we have had such a close relationship with the diocese,” she said. “In fact, St. Joseph’s Home was located on Sixth and Lawrence, where the Cathedral now stands, before the See City was moved to Springfield.”

Each 24-karat gold-plated ornament is boxed and includes a signed and numbered certificate of authenticity. The ornaments are produced in a limited edition.

This year’s ornaments, as well as ornaments from all years except for 1993 and 1995, are for sale for $23 each at St. Joseph’s Home at 3306 S. Sixth St. Road in Springfield. Visitors to St. Joseph’s website, www.saintjosephshome.org can see all 17 ornaments.

For more information on this year’s ornament or those from earlier years, contact Terri Hempstead at (217) 529-5596.