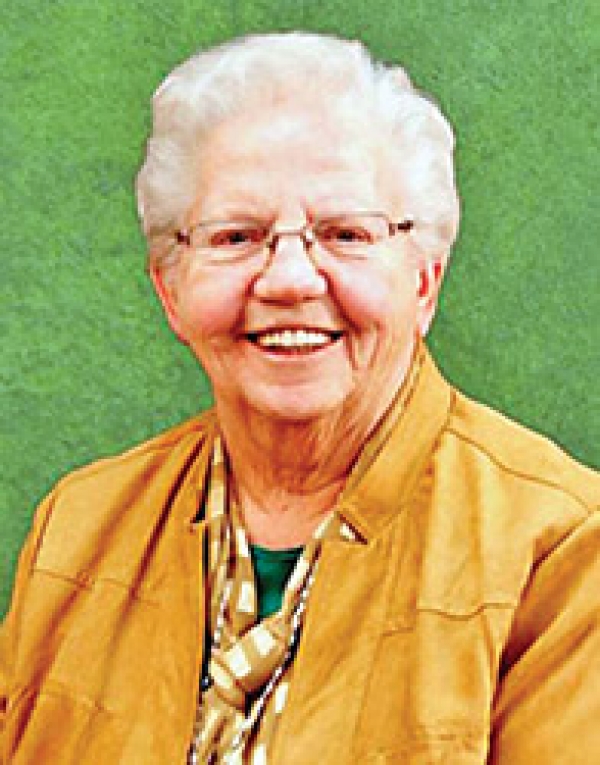 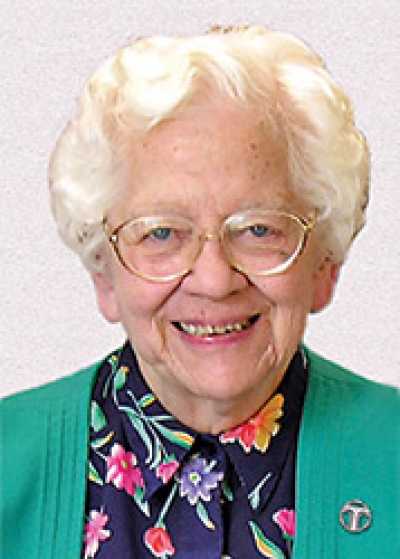 Sister Augusta Sperl, OSF, of the Hospital Sisters of St. Francis died on April 2 at St. Francis Convent in Springfield. She was 97 years old.

Sister Augusta, the former Bernadine Elizabeth Sperl, was born in Springfield on March 8, 1923, the daughter of August and Elizabeth Beckman Sperl. She entered the congregation on Sept. 8, 1939 and professed her religious vows on Oct. 4, 1942. 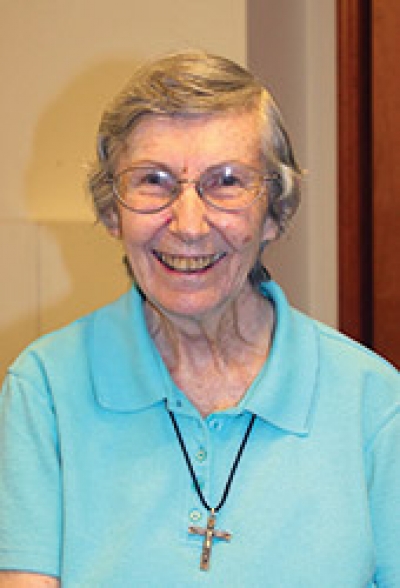 NEW ORLEANS — Sister Mary Patrice Clifford, OSU, died peacefully on March 29 in New Orleans. She served many years in the Diocese of Springfield in Illinois.

The daughter of Connell and Mary Eunice Clifford, Sister Mary Patrice was born Lillian Patricia Clifford on Sept. 2, 1935, in Oak Park. After her family moved to New Orleans, she attended Ursuline Academy there, graduating in 1953. She entered the Ursuline community that summer and professed her vows in 1956. 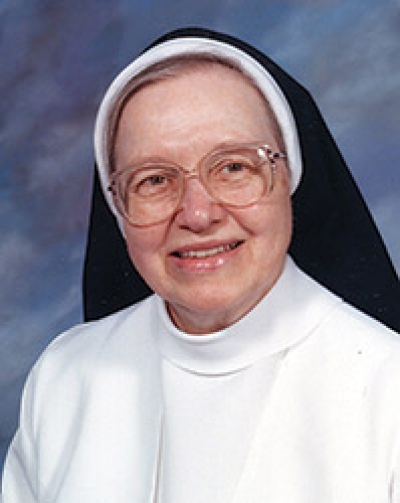 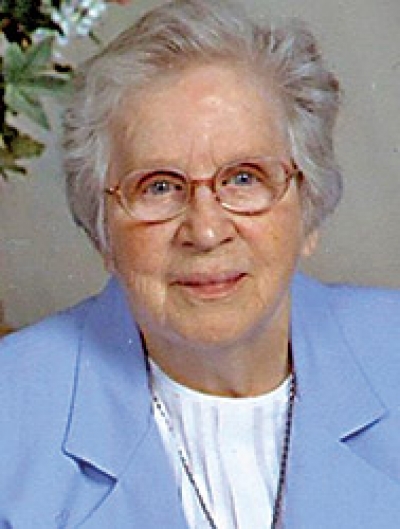 The daughter of Raymond F. Cour and Frances Irene Greeley, she was born Jan. 11, 1924, in Springfield. As a young student at Ursuline Academy, she was captivated by stories of the missions and dreamed of the day when she could give her life to this work. She entered the Ursuline Sisters in Crystal City, Mo., in 1944 and made her vows in 1947.

RUMA — Sister Theresa Marie Braun, ASC, died Jan. 7 at the Ruma Center. She was 93 years old and was a professed member of the Adorers of the Blood of Christ for 76 years. 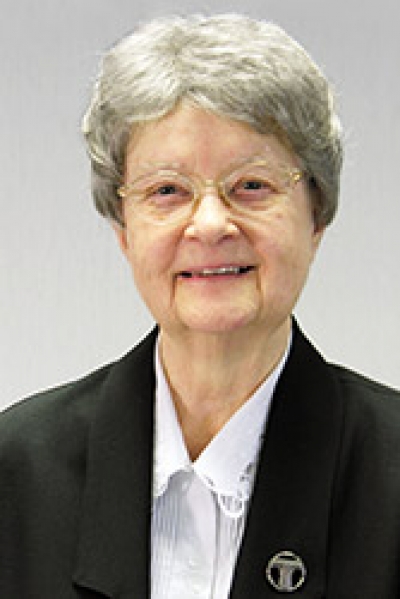 Sister M. Elvon Huser, OSF, of the Hospital Sisters of St. Francis died on Jan. 6, at St. Francis Convent in Springfield. She was 100 years old.

Sister Elvon, the former Marie Cecilia Huser, was born in Hanson, Wis., on March 20, 1919, the daughter of Frank and Anna Wirtz Huser. She entered the Congregation on Oct. 1, 1936 and professed her religious vows on June 13, 1939. 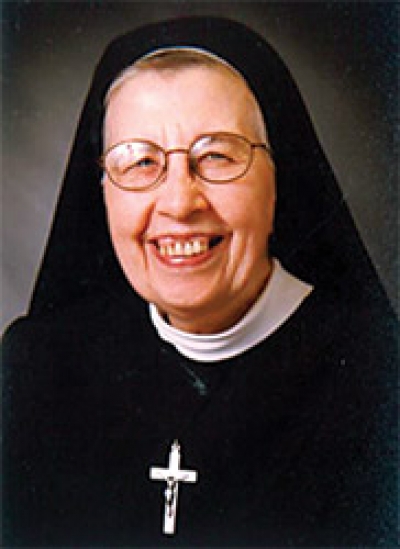 ALTON — Sister M. Wencesla Rieger, FSGM, died on Jan. 7, at the St. Francis Convent infirmary in Alton. She was 94.

She was born on March 29, 1925, in Weigelsdorf, Kreis Reichenbach, Germany, the daughter of Joseph Rieger and Magda (Roesler) Rieger, both deceased. 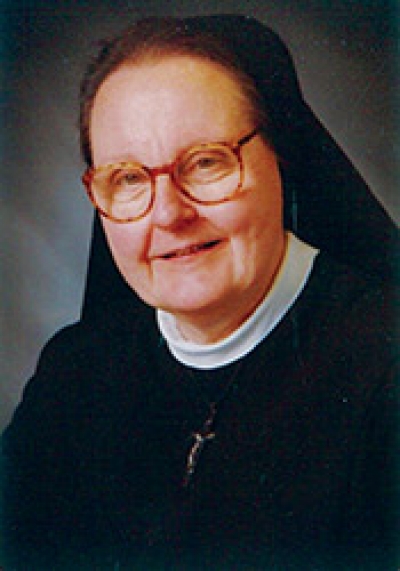 ALTON — Sister Mary Gabriel Gibbons, FSGM, died on Jan. 13, at the St. Francis Convent infirmary in Alton. She was 82.

She was born on June 12, 1937, in Alton. She entered the Congregation of the Sisters of St. Francis of the Martyr St. George in 1955, shortly after her graduation from Marquette High School. The congregation was founded in Germany. Sister Mary Gabriel was the second American-born sister. She made her first profession of vows in 1958, and her final profession of vows in 1963. She celebrated her Golden Jubilee in 2007, and her Diamond Jubilee in 2017. 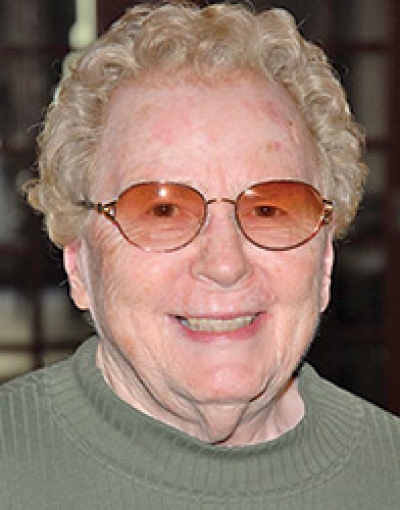 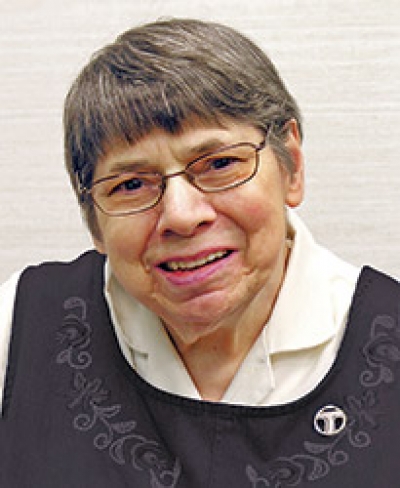 Sister Maretta Kurk, OSF, of the Hospital Sisters of St. Francis, died on Dec. 19, 2019, at St. Francis Convent in Springfield. She was 87 years old.

Sister Maretta, the former Norma Jean Kurk, was born in Quincy, on June 15, 1932, the daughter of Clarence and Edith Schaich Kurk. She entered the Congregation on Sept.12, 1951, and professed her religious vows on June 13, 1954. 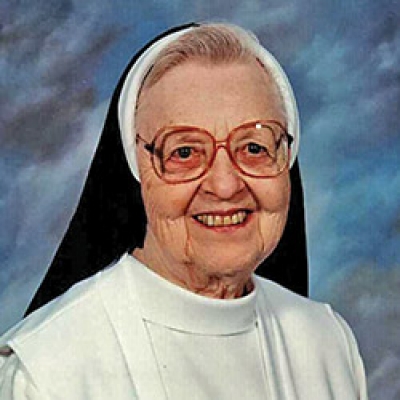 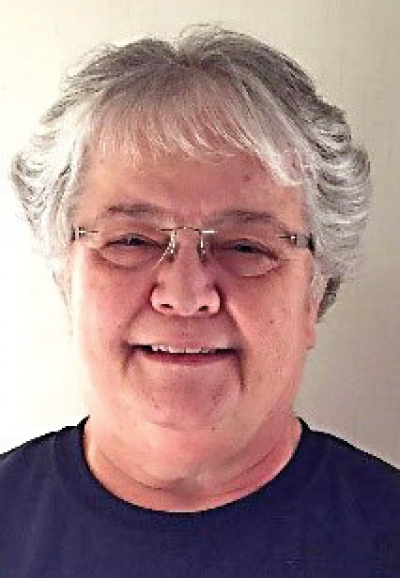 Sister Kate was born in St. Louis on Jan. 21, 1949 and she was adopted by Lawrence Kuenstler and Lorraine (Buerster) Kuenstler, who preceded her in death. Her siblings include her brother, Matthew (Deb) Kuenstler and her sister, Agnes Schoultz. 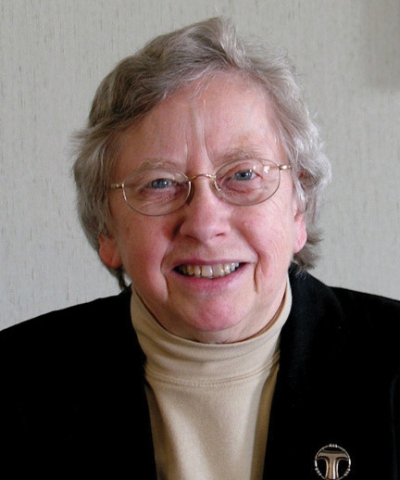 Sister Josine Mondloch, OSF, of the Hospital Sisters of St. Francis, died on Oct. 19 at St. Francis Convent in Springfield. She was 87 years old.

Sister Josine, the former Dolores Mary Ann Mondloch, was born in Sheboygan, Wis., on Aug. 12, 1932, the daughter of Joseph and Magdalen Schirmeister Mondloch. She entered the congregation on Feb. 2, 1949 and professed her religious vows on Oct. 4, 1951. 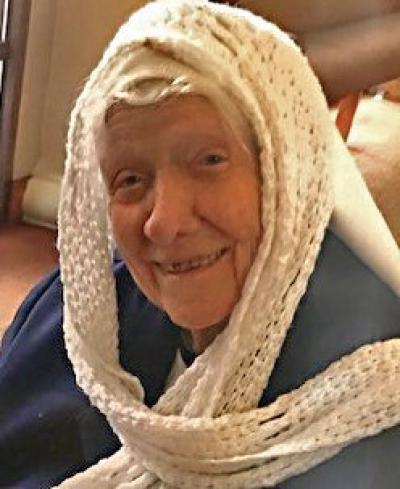 ST. LOUIS — Sister Marie McCloskey, OSU, died peacefully Oct. 4, at Our Lady of Wisdom Healthcare Center in New Orleans, at age 105. She taught in the Springfield diocese during the 1960s and 1970s. 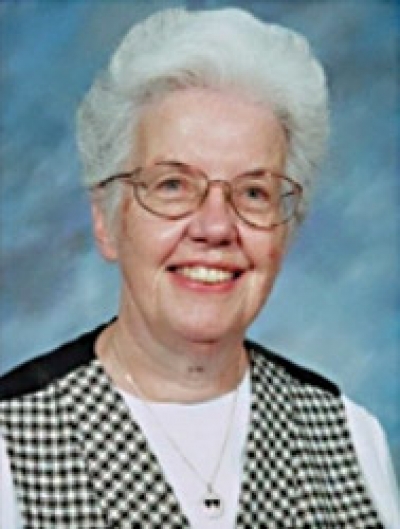 Springfield Dominican Sister M. Francene Harbauer died Oct. 9, at St. John’s Hospital in Springfield. She was born in Springfield in 1931 to Frank and Ella (Keeley) Harbauer, who named her Nancy Ann. In 1951 she made profession of vows at Sacred Heart Convent, Springfield.

The last 25 years (1989-2014) of Sister M. Francene’s 63 years of ministry were devoted to Rosary High School in Aurora, where she served as principal and then as director of advancement. During her earlier years of ministry (1951-1985), she was a principal and/or a teacher in Catholic parish elementary schools. In Illinois these included St. Paul, Odell; St. Edward, Chicago; St. Kevin, East Alton; St. Malachy, Rantoul; St. Thomas More, Elgin; and Little Flower, Springfield. From 1985-1989 she was principal at Sacred Heart School in San Diego, Calif. 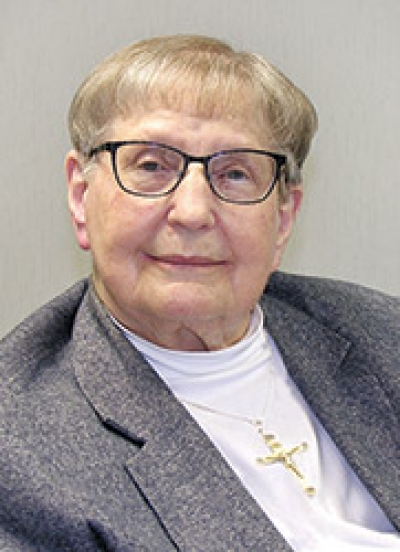 Sister Anna Clara Rick, OSF, of the Hospital Sisters of St. Francis died on Oct. 11 at St. Francis Convent in Springfield. She was 90. 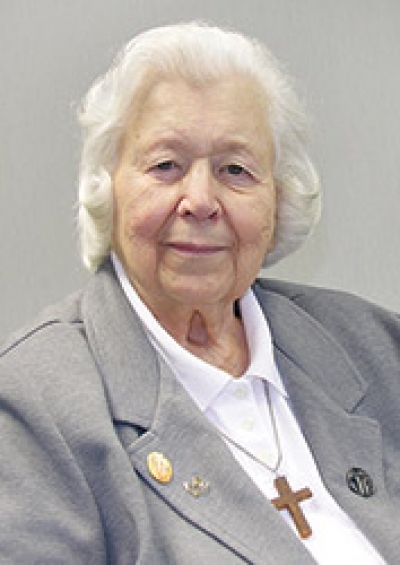 Sister M. Viola Swoboda, OSF, of the Hospital Sisters of St. Francis died on Oct. 10 at St. Francis Convent in Springfield. She was 91. 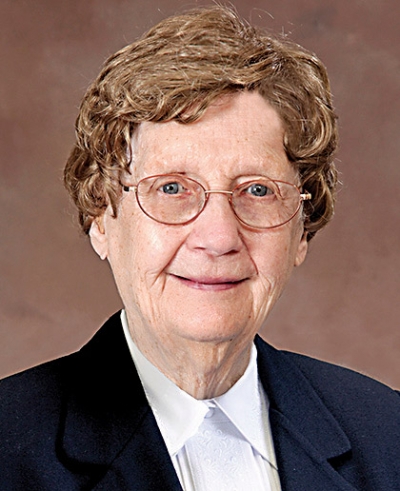 Edward Bonk, father of diocesan priest Father Paul Bonk, passed away on July 12 at his home in Maryville with his wife at his side.

He was born on Oct. 9, 1927 and grew up on the family farm in Posen near Nashville, the son of the late Anton and Agnes (Paszkiewicz) Bonk. He was an active member of Mother of Perpetual Help Church in Maryville, and a member of the Polish Roman Catholic Union of America, St. Stanislaus Society #1004 (Polish Hall) in Madison. He especially enjoyed attending all events involving his children and grandchildren. 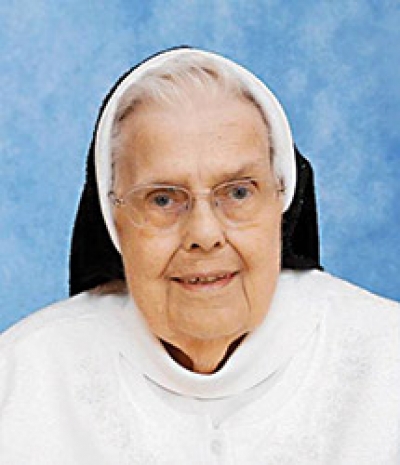 Springfield Dominican Sister Mary de Paul Kane died on July 18 at St. John’s Hospital in Springfield. She was born in Chicago, in 1924, to Francis and Anna Hanson Kane, who named her Marguerite. She made her profession of vows in 1951 at Sacred Heart Convent, Springfield. 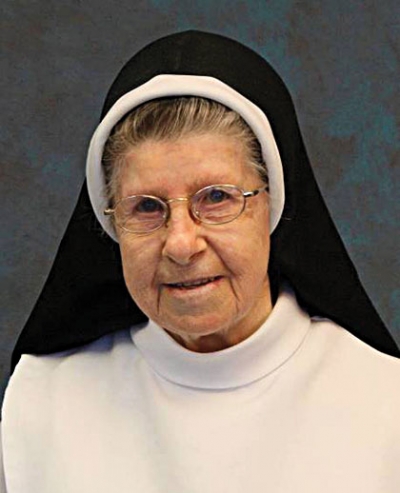 Sister M. Lawrence was a consummate educator. Her expertise benefited every Springfield Dominican teacher and principal during 12 years of service as the congregation’s councilor and director of education. Her first 13 years of ministry were spent teaching primary grades at St. Christina Parish, Chicago. She also taught at Holy Family School, Decatur, and was a principal-teacher at St. Joseph, Granite City, and St. Agnes, Springfield, where she was missioned in the 1970s and 1990s. In 1994, she returned to her hometown as teacher and assistant principal at Holy Rosary School. She retired to Sacred Heart Convent in 2001. 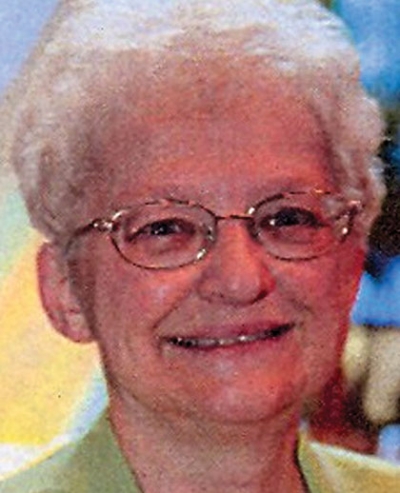 She was born on April 9, 1947 to a loving family in rural St. Genevieve, Mo., the fourth of 11 children of Raymond and Lucille (Hoog) Uding. She grew up sharing in all the family activities and responsibilities with her siblings on the Uding family farm and enjoyed a close relationship with her family throughout her entire life. 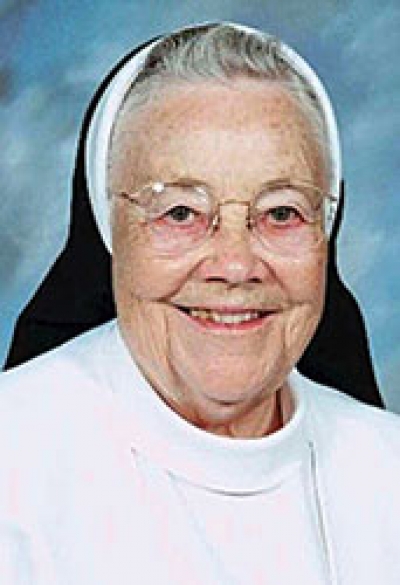 Sister M. Martina’s passion for education was spent, over a 50-year period, on the needs of primary and preschool-aged children. She taught at parochial schools in Illinois, Colorado and Minnesota. 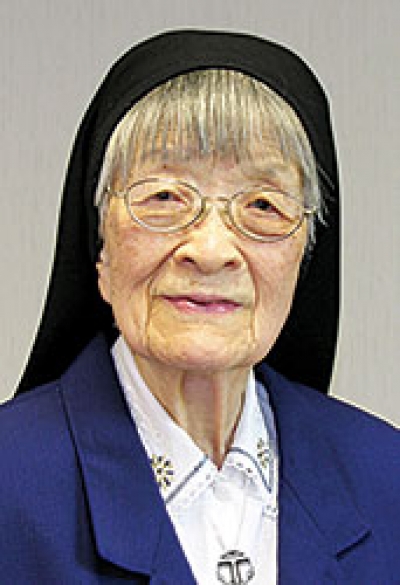 Sister Joseph Wu, OSF, of the Hospital Sisters of St. Francis died on June 4 at St. Francis Convent in Springfield. She was 98 years old. 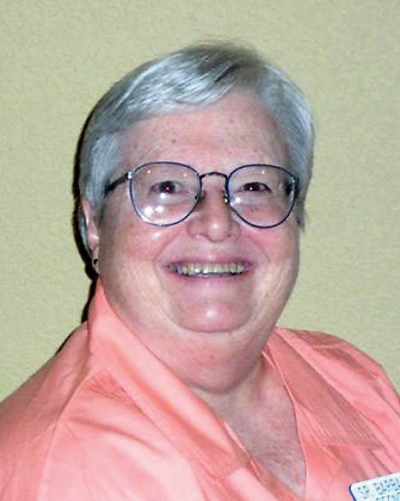 ST. LOUIS — Sister Barbara Becnel, OSU, known for a time as Sister Marie Sarto, died peacefully May 3, at Our Lady of Wisdom Healthcare Center in New Orleans. She served in the Diocese of Springfield in Illinois in the 1960s and 1970s.

The daughter of Albin J. Becnel and Ione Anderson Becnel, she was born Oct. 23, 1937, in New Orleans. She graduated from Ursuline Academy in New Orleans and entered the Ursuline Sisters in July 1955, making her vows in January 1958. 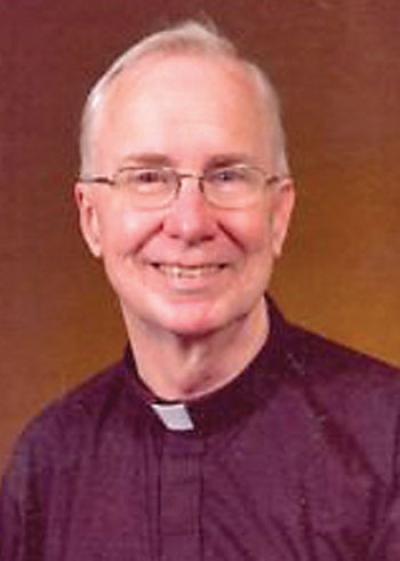 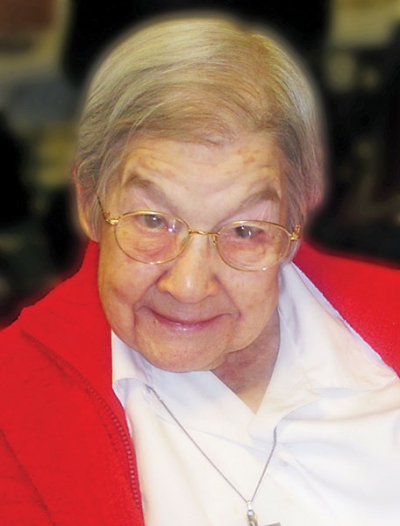 ST. LOUIS — Sister Mary Margaret Prenger, OSU, died peacefully April 9 at Our Lady of Wisdom Healthcare Center in New Orleans. She served many years in the Diocese of Springfield in Illinois. She was 96 years old.

The daughter of Frederick C. Prenger and Blanche Marcelle Marion Prenger, she was born Edna Marie Prenger on March 11, 1923, in New Orleans. Sister Mary Margaret graduated from Ursuline Academy of New Orleans and attended Ursuline College there. She entered the Ursuline Sisters in July 1942 and made her vows in January 1945. 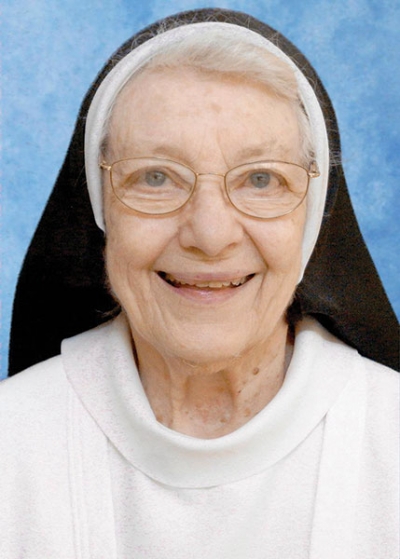 Sister M. Alan will be remembered by hundreds of high school graduates as a favorite math teacher. She first taught junior high school and high school math at St. Augustine, Richmond, Mich., from 1966-1968. She taught math at Sacred Heart Academy from 1969-1983, and from 1983-1989, she taught at Rosary High School, Aurora. In 1989, she moved to Marian Catholic High School, Chicago Heights, where she taught math until 2005, interrupted in 1998 by a leave of absence for family care. 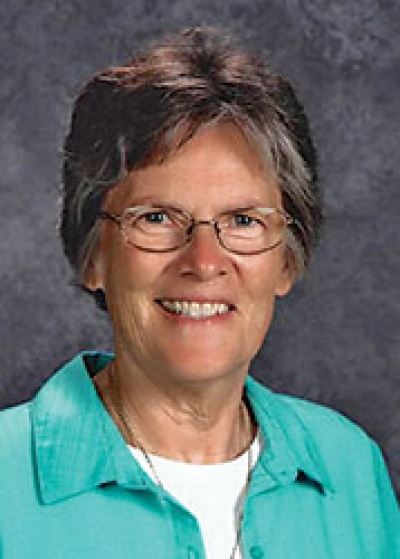 Sister Margaret Joanne was an educator who dedicated nearly half her 42 years of religious life to the students and faculty at Sacred Heart-Griffin High School in Springfield. There she was assistant principal from 1994-1998 and principal from 2000-2016. In the interim, she completed a master’s degree in human development and counseling at UIS. From 2016-2018, she taught junior high school religion at St. Agnes School in Springfield, until illness required her retirement.